How Onitsha celebrated Ofala, 20 years of Igwe Achebe on throne 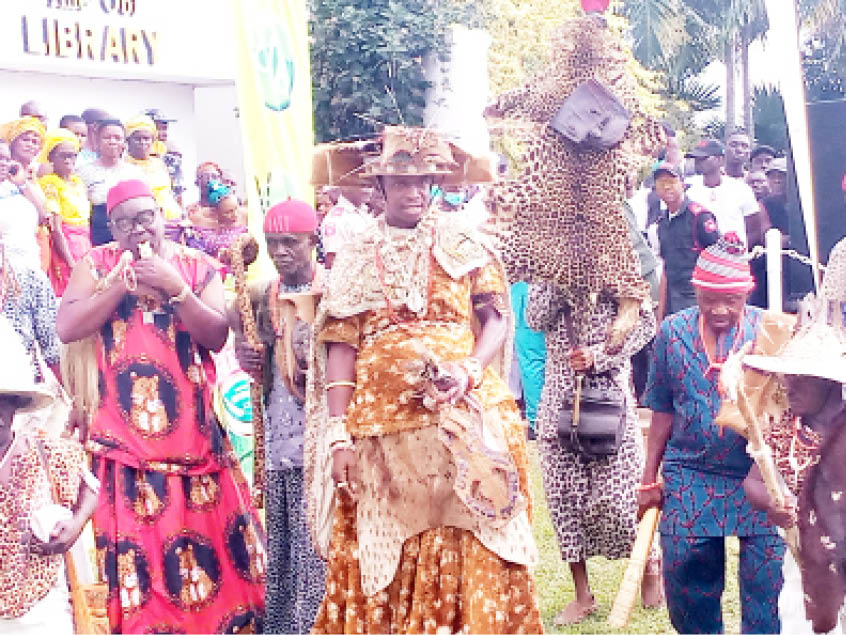 Igwe Achebe in a royal dance with his Ndi Ichie

It was like a classic movie last Saturday as the ancient town of Onitsha celebrated its 2022 Ofala festival and 20 years of its traditional ruler, Igwe Nnaemeka Achebe, on the throne.

Ofala, which is highly celebrated in Onitsha, the commercial centre of Anambra State, is deeply rooted in spirituality. It is usually the time for the monarch, Obi of Onitsha, who is the chief celebrant, to fulfill certain obligations. It is time when the monarch appears in public to negotiate the fortune of the kingdom with his subjects. The monarch also reviews his army and obtains assurance of loyalty from his redcap chiefs (Ndi Ichie).

In the olden days, the monarch was rarely seen in public; hence Ofala provided an opportunity for his subjects to have a glimpse of him and pay homage. This tradition has continued over the years.

The festival lasts for two days, during which royal dance is displayed, among other traditional activities. The first day, known as Iru Ofala, is primarily for the monarch. It is attended by redcap chiefs, while the monarch, in his full royal regalia, parades his palace in three different occasions and performs war dance in full view of the people present.

During this performance, his subjects, visitors and other interested groups pay him homage.

The second day, Azu Ofala, is for his subjects, made up of various societies and in their uniforms, to display. Each group will dance and pay homage to the monarch.

The annual event, which is sponsored by Globacom, International Breweries and others, attracts dignitaries across all walks of life.

Among personalities that attended this year’s event were the vice  presidential candidate of the Peoples Democratic Party (PDP), Ifeanyi Okowa, represented by the  chairman of the United Nigeria Airlines Company Limited, Professor Obiora Okonkwo, the governor of Anambra State, Professor Charles Soludo and Senator Ndii Obi.

The programme started with the sitting of Ndi Ogbe Ndida village, the   kinsmen of Igwe Achebe, followed by members of the Agbalanze society and their wives, Otu Odu, who sat separately from their husbands. Ndi Ichie came in with dancing steps, and finally, Igwe Achebe entered.

Achebe entertained the crowd with his royal dancing steps as he entered the arena, while the people rose in thunderous ovation till he sat down.

After the monarch sat, the Otu Odu women came in their white attires and  ankle bracelets  to  entertain guests, Ndi Ichie, the Igwe and others.

This was followed by Ndi Ichie, who came to entertain people with their dancing steps.

It was a scene to behold as elderly men of 80 years and above moved like young lions. They danced round a large square greeting various groups.

The carnival also opened opportunities for many people to display their goods; hence the venue turned out to be a trading site for visitors who came to witness the event.

After the dance, people from Igwe’s village presented kolanuts to him to offer his guests. Traditional prayers and breaking of kolanut followed, according to Igbo culture.

Achebe’s 20 years on the throne

Igwe Achebe, the Agbogidi, described his 20-year reign as the traditional ruler of Onitsha as a journey of leadership change with the sole purpose of  fast-forwarding an ancient traditional society to the 21st century.

He said there was no end to positive change because change is a continuous process.

“We have to anticipate and be apace with change, else change will overtake us. On ascending the throne, I defined a personal ruling philosophy of “Peace and reconciliation based on truth and transparency as a foundation for sustainable development. Drawing from this philosophy, we have shaped a vision of re-inventing and re-positioning the Onicha Ado N’Idu Kingdom.

“We have applied modern management and leadership principles to traditional governance and the progressive evolution of the culture of our people,” he said.

He said there was the need to reposition and rebuild trust amongst the people, especially through the resolution of long-standing disputes within and between kindred and villages, as well as reform and refocus youths’ aspirations and energy.

He also said there was the need for palace redevelopment as a symbol of change, re-definition of the community, and the promotion of the pride and spirit of Onitsha people.

The monarch said the vision was pursued through various initiatives over the years, including youth development workshops, physical and virtual town hall meetings, think tank strategy sessions, engagements with Onitsha indigenes outside the community, annual conferences.

Igwe Achebe further said the objective had been enhanced by the endorsement of Ofala by the Nigerian Tourism Development Corporation (NTDC) as a major Nigerian festival, thus boosting the opportunity of bringing the world to Onitsha to experience its rich cultural heritage, which will in turn enhance the growth and development of the community.

He said this year’s celebration was distinctive because he ascended the throne of Ezechima, the founding father of Onicha Ado N’Idu, 20 years ago, precisely on May 14, 2002, which was coincidentally his 61st birthday.

“Thus, I have chosen to formally mark this milestone anniversary with the 2022 Ofala festival as the pedestal for thanksgiving and celebration,” he said.

He also acknowledged the main sponsors of the festival – Globacom and International Breweries, saying, “Our relationship with these bodies over the years has contributed in no small measure to the growth and development of Ofala.

“Several persons have also made significant contributions to this year‘s celebration. We thank these donors and supporters very much. We will individually acknowledge your generosity.

“Special mention has to be made of the Nigerian Tourism Development Corporation for not only endorsing Ofala as a major Nigerian festival but also issuing a specific mandate for its support. We look forward to continuing this collaboration.

“We also appreciate our visitors who came from far and near to felicitate with us notwithstanding travelling challenges. We do not take your friendship for granted. We look forward for opportunities to reciprocate your kind gesture. We pray for God’s protection as you journey back to your destinations.

“Our appreciation also goes to the various security agencies in the state, who have collaborated tirelessly and effectively to ensure a hitch-free celebration,’’ Igwe Achebe added.

He also thanked God for a successful Ofala and the last 20 years on the throne.

Also speaking during the occasion, the Anambra State governor, Professor Charles Soludo, said there was the need to uplift the rich cultural heritage of Ndi Igbo.

The governor, in company of his wife, Mrs Nonye Soludo, said he had attended Ofala festival thrice during the past 20 years.

He said, “I am very happy to be here for this celebration. Onitsha has a rich culture. Agbogidi is the only traditional ruler in the state that has two local government areas under his care.

“Our culture is our identity. Our culture as Igbo people is diverse. I listened keenly as the Agbogidi made a call that we should go back to our culture, re-orientate our values of hard work, persistence and honesty.

“I plead with all traditional rulers to have harmonious relationships with their elected council and town unions.”

“I have seen wise leadership in Igwe Achebe. Onitsha is blessed. He has a lot of wisdom. The followership is loyal, and I have no doubt that in no distant time, Onitsha will occupy its place in the cultural calendar of Nigeria,” Okonkwo said.

He also called on other Igbo societies to emulate what is happening in Onitsha.

“I am a promoter of Igbo culture. I brought back the New Yam festival in a big style that had never been in Anambra. It is now working in every family in the state. I am happy that Ofala is done with a difference,” he added, and enjoined other monarchs and communities to join in showcasing Igbo and African cultures.

A former Abia State governor and chief whip of the Senate, Dr Orji Kalu, described the Obi of Onitsha as a committed and patriotic statesman who had passion for growth and development.

He called on other leaders to emulate the outstanding leadership qualities of the Onitsha monarch, who he said had brought unprecedented development to his domain and environs.

“The paramount ruler has continually made unbiased and objective contributions to national discourse. His giant strides on the throne are worthy of commendation and emulation. The monarch is a rallying point for Ndi Igbo across the globe,” Kalu said.