‘How neighbour took custody of my children, converted them to Christianity’

For five years, Aishatu Muhammad, a widow went around Lagos State in search of her children who were abducted and converted to Christianity by an… 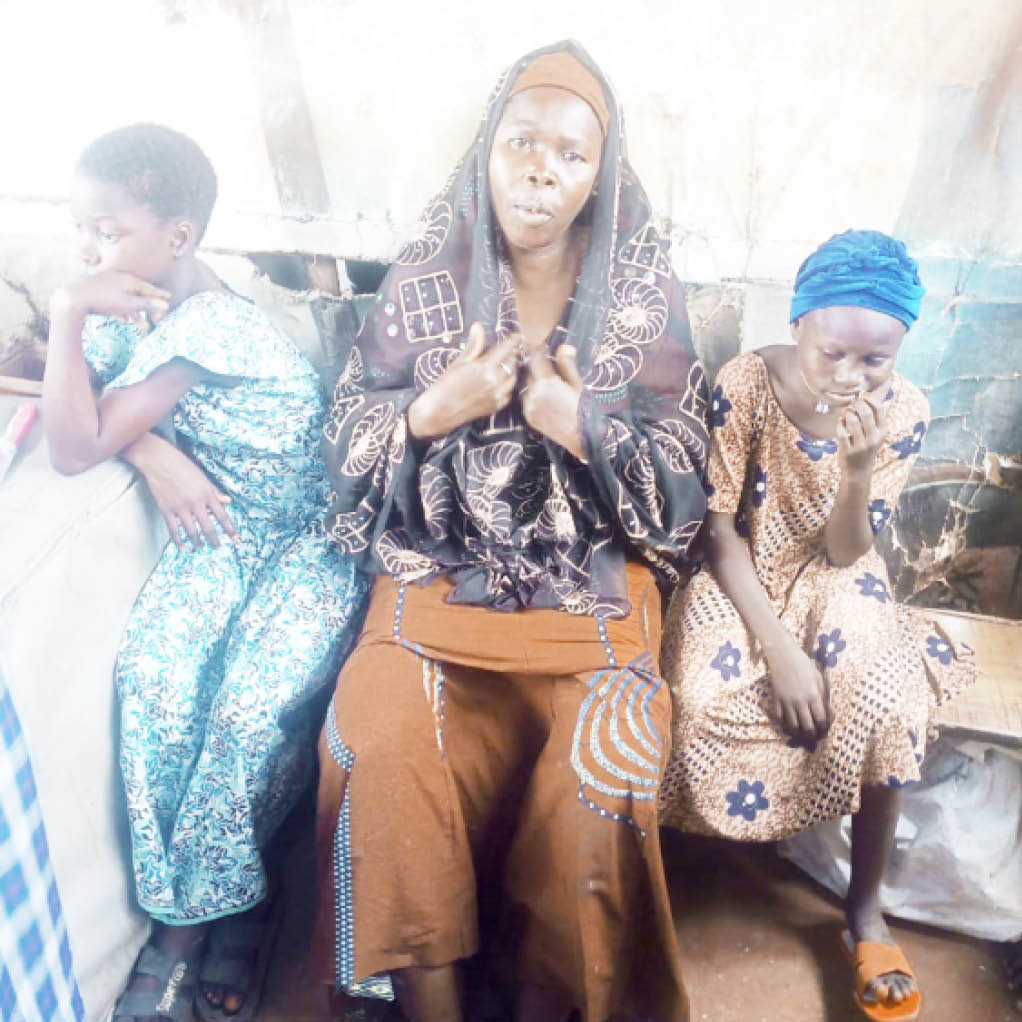 Aisha with her children after regaining them

For five years, Aishatu Muhammad, a widow went around Lagos State in search of her children who were abducted and converted to Christianity by an ex-neighbour. The mother of two who recently reunited with her daughters said the police in Lagos had failed to investigate the matter and arrest the suspect. Daily Trust Saturday reports.

Aishatu Muhammad, a widow and mother of two still struggles with the orientation of her two daughters, aged nine and 10 after they were abducted and converted to Christianity, five years ago. She recently told Daily Trust Saturday that the Lagos State Police Command had failed to investigate the matter and arrest the suspect whom she identified by the name Kudira, who lives in Adamo Olorunda, Ikorodu area of Lagos State. The widow explained that the matter had been reported to the police at Olorunda but they had showed little concern and did not initiate an investigation or effect arrest on the suspect.

Having lost her husband six years ago when they lived in Ado-Ekiti, Ekiti State, the mother of two said she relocated to Oshogbo, in Osun State with her two children and later fell ill. She said due to her ailment, her neighbour, Kudira had offered to care for her children because Aishatu was preparing to move to the northern part of the country for treatment. “I agreed to leave the children with her since she was my neighbour, and we lived in the same house,” Aishatu said. “While away, I would call her on phone to check on my children, and she would tell me that they were fine and were even going to school,” she narrated.

But suddenly, Aishatu said it became difficult to reach her neighbour on phone and soon after she had recuperated, she travelled down to Oshogbo to see her children but found that Kudira and the children had relocated to Lagos State.

“I followed her to Lagos after some good Samaritans raised some money for me but I was unable to find her. I spent a lot of time over there till I exhausted my finances and had to return to the North, where I sought prayers from some clerics, in a bid to recover my children,” she said.

Soon after she raised some money again, Aishatu said she returned to Oshogbo where a woman she was acquainted with told her she had her ex-neighbour’s current phone number. “She helped me call her on phone but she was aggressive to her and was shouting why she had to call her and talk about the children. The woman ended the call, and told me that there was nothing she could do, but disclosed that Kudira and my children were living in Ikorodu area of Lagos.”

Armed with this information, Aishatu travelled to Ikorodu, and for days went around on a motorcycle in search of her children. “I was doing that for days then one day, I heard the voice of my youngest child shouting my name. I stopped the bike man, grabbed her and interrogated her. I asked of her older sister and she told me that she was in another house with another woman who sells food. I asked her to lead me to the house and on reaching there, the woman refused to release my daughter claiming that the actual woman (Kudira) who gave her the child was not around. She said Kudira had travelled to the North to buy yam and that she could only release the child when she returned.”

The mother of two said she had noticed that her youngest daughter’s physical appearance had changed and that she was wearing a cross neck piece. “Her name is Zainab but they renamed her Sarah. So, I asked of the Sarkin Hausawa in the area and someone took me to him. I explained my ordeal to him and he immediately took me to the police station at Olorunda and laid a complaint. The police asked us to wait till Kudira returns and when she did, I went with the Sarkin Hausawa to meet her but she insisted she was not going to release my child. When the Sarkin Hausawa told her that he had reported the matter to the police and requested that we all go to the police station, she agreed to release her.”

However, expressing disappointment, Aishatu said after the Sarkin Hausawa called the police on phone and informed them that Kudira had returned, instead of inviting the suspect or arresting her, the police asked the Sarkin Hausawa to take charge of the case, since the woman was now willing to release the child. “That was how I got my children, through the help of Sarkin Hausawa. To some extent, my eldest child who had been renamed Deborah refused to follow me because she had lived with them for years and she was being threatened by them,” she said.

The widow, whose children, aged nine and 10 now live with her said she had been denied five years of living with her girls saying she is now doing her best to care for them.

“Even as I don’t have much to offer them, I am now staying in Sabo in Ondo State, doing some petty jobs, such as cleaning and washing plates so as to care for my children. What i can say now is that my children need prayers and proper orientation,” she said.

The Sarkin Hausawa of Adamo Olorunda, Malam Abdurahman Sulaiman told Daily Trust Saturday that he had earlier reported the case to the police, and that Kudira, who abducted the children was around when he called the police on phone to notify them. “They asked me whether she was willing to release the children and I told them yes, but that we needed to come to the police station for documentation but the police said it was not necessary that I could also do that in my palace. Ans so, I did and asked my secretary to write and both parties signed,” he said.

Corroborating this, Abubakar Alhassan, the Secretary of the Sarkin Hausawa of Olorunda who recorded the video and posted it on Facebook to draw the attention of the relevant authorities however said his account had been hacked after the video went viral. All efforts made by our correspondent to get the comments of the Lagos State Police Command was unsuccessful as the Police Public Relations Officer, Benjamin Hundeyin did not answer calls and did not reply a text message sent to him.