‘How mob attacked me over penis theft allegation’

A motor spare parts dealer in Bayelsa State, Mr Oha Maximus Tochi, has narrated how God saved him from being killed by an angry mob… 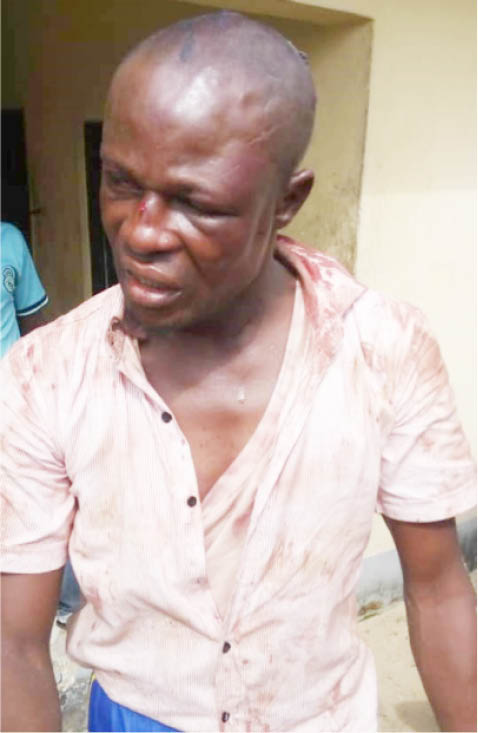 Oha Maximus Tochi, beaten to a pulp by mob, for alleged penis theft.

A motor spare parts dealer in Bayelsa State, Mr Oha Maximus Tochi, has narrated how God saved him from being killed by an angry mob who attacked him following a false ‘penis theft’ alarm raised by a laundry operator he gave his clothes in Yenagoa, Bayelsa State.

Tochi, said he was planning to emback on a business trip so he packed some clothes in his house for the laundry shop for washing. He said after giving the clothes and paying the prescribed charges, the shop owner raised an alarm of penis theft.

According to him, it was surprising for him to see the man chasing after him barely three minutes after he left the laundry shop and was heading to his shop at the mechanic village.

While denying ever indulging in such activities, Tochi said after the mob beat him to a pulp and inflicted bruises on his body, the police arrived at the scene and took him and the man, who accused him of penis theft to the police station.

He said on getting to the station, the man confessed that his penis was still functioning.

“On getting to the police station, the police boss came and interrogated us. The boy that raised the alarm confessed that his penis is now functioning. The man asked him which charm I used in restoring the penis, he said he does not know.

“So what if I had been killed and he later found out that nothing happened to his penis; It’s pathetic. I think the government should do something to guard against mob action because innocent people could be killed for what they know nothing about”, he said.

Tochi added that, “Since the incident, I have been in the hospital treating myself; both the internal and external injuries I sustained. The business money that was with me was stolen during the attack,” he said.

Our reporter gathered that the man that raised the false alarm and his father have been arrested and detained at the Bayelsa State Police Special Anti-Robbery Squad (SARS) station in Yenagoa for investigation.

However, efforts to get the police spokesman in the state, SP Asinim Butswat, to confirm the development was not successful, as he promised to find out and get back but was yet to do so at press time.