Dickson Salami Adama, Jos The history of Plateau State will not be complete without tin mining which has left indelible marks on the psyche of… 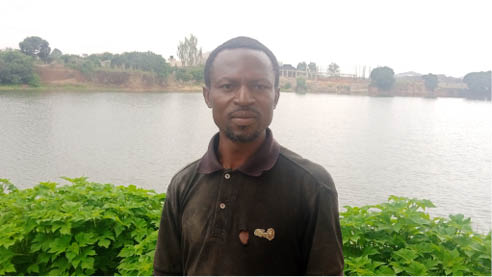 The history of Plateau State will not be complete without tin mining which has left indelible marks on the psyche of the state. In the past, especially pre-colonial Nigeria, it was a viable source of revenue for the colonial administration but recently, tin mining in the state is largely artisanal and unregulated, leading to mine collapse, which has killed and injured many. Worse still, the abandoned mining pits have become gaping graves where many lives are buried as well as causing environmental hazards.

Daily Trust observed that the abandoned mining pits have not been covered and so they become flooded with rain and underground water. Unsuspecting persons have become victims to these pits which have become pools where children swim or fetch water.

Criminals too have taken advantage of the pools, concealing exhibits of their crimes under the unfathomable depths of the water.

A resident of Bukuru, Solomon Ngwak, who lost his one- and-half-year-old son in one of the pits in 2014 said since his son got drowned in a mini pond behind his house, he has been warning people about the dangers of ponds, mining pits and the like.

He said his wife was in the kitchen cooking and did not know when his son crawled into the water and got drowned, and by the time they realized, it was his lifeless body they found.

Incidentally, Ngwak works at a block industry in the Little Rayfield area of Jos immediately beside an abandoned mining pit which has become a big dam. And he said they yearly record deaths in the pit, particularly of those who come to swim in it.

He said they recorded two deaths last year, and that in one of the cases, the boy’s corpse was not recovered until after four days when the corpse came out onto the water surface.

“One of the deaths recorded in the mining pit here was that of a boy among some boys who came to swim. As soon as the boy got drowned, the rest ran away and refused to mention it to anyone. And we were busy working on our site and did not notice that anything of such had happened. It was on the fourth day that we found a corpse floating on the water and then made an effort to bring it out.

“After we brought the corpse out, we began sending out messages through available channels for anyone whose child was missing to come for identification. That was how the message got to the family before they rushed down and identified the corpse,” he said.

Ngwak added that since the incident, they have been prohibiting people from swimming in the water, particularly children.

For Christopher Ishaya, a resident of Bisichi in Jos, the mining pits have caused erosion, building collapse and road failure. He said some of the collapse cases were as a result of mining pits creating a hollow beneath the ground on which the structure is sitting, which often causes the building to cave in.

Ishaya also said mining has affected farming and provision of amenities like roads as the land has been thoroughly degraded, leaving no soil to plant crops or ground to construct a road or even build a hospital.

He further said the abandoned mining pits are a haven for criminals who use the areas to rob passersby, explaining that the criminals usually threaten to kill and dump the bodies of their victims in the pits.

Another resident of Top in the Rayfield area of Jos, Milo Ndach, said years back, government used to cover up the mining pits so that they wouldn’t become hazardous to the people, but that isn’t happening anymore.

He said some of them, however, take advantage of the water in the pits to do irrigation farming.

Da Dr Nga Dangyang, the Da Gwom Ryei Jos South, where such mining pits abound, said it is regrettable that the mining pits have been abandoned. He said government used to fill them properly in the past.

He said there have been several cases of humans and cattle falling into them and getting drowned.

He said the Rayfield area of Jos which is today the place for the wealthy, including the popular Atiku Street, was mining pits decades back but were properly filled and people have built their houses there and are standing till date.

The manager of a mining processing company, Resource Global Foresight Nigeria Limited in Bukuru, Bello Muhammed, said the pits are dangerous because they are very deep, often measuring up to 25-30ft in depth.

The manager said the best way to tackle mining pits menace is for the miners to always properly cover whatever pits they have dug in the process of their mining activities so that they don’t get flooded by water and become dangerous to the populace.

He said miners should not leave everything for the government, and that they should play their parts as miners by doing the right thing which is, after mining, they should always close the pits with the excavated sand; instead of leaving them open like they usually do.

Reacting, Plateau State Commissioner for Environment, Hon. Usman Idi, said it is very unfortunate that mining has become a problem in the state.

He however said the government has adopted strategies to convert mining pits into good use.

“Firstly, the Ministry of Agriculture in collaboration with the Ministry of Environment has come up with a list of those dangerous mining pits that can be converted to fish ponds,” he said.

Idi also said the ministry in collaboration with the Ministry of Solid Minerals has equally been sensitising the miners, particularly active miners, into forming groups so that they can be taught modern ways of mining so the rate of dangerous mining can be reduced or eradicated.

“The Ecological Project Office domiciled in the office of the Secretary to the Government of the Federation has been doing well in trying to see that some of the areas with ecological problems are being handled; most of them in Bokkos and Barkin-Ladi have been put in check,” he added.