Traders in Inuwa Muhammed Street, Ajao Estate in Lagos metropolis are still counting their losses, almost a week after a gas explosion wreaked havoc in… 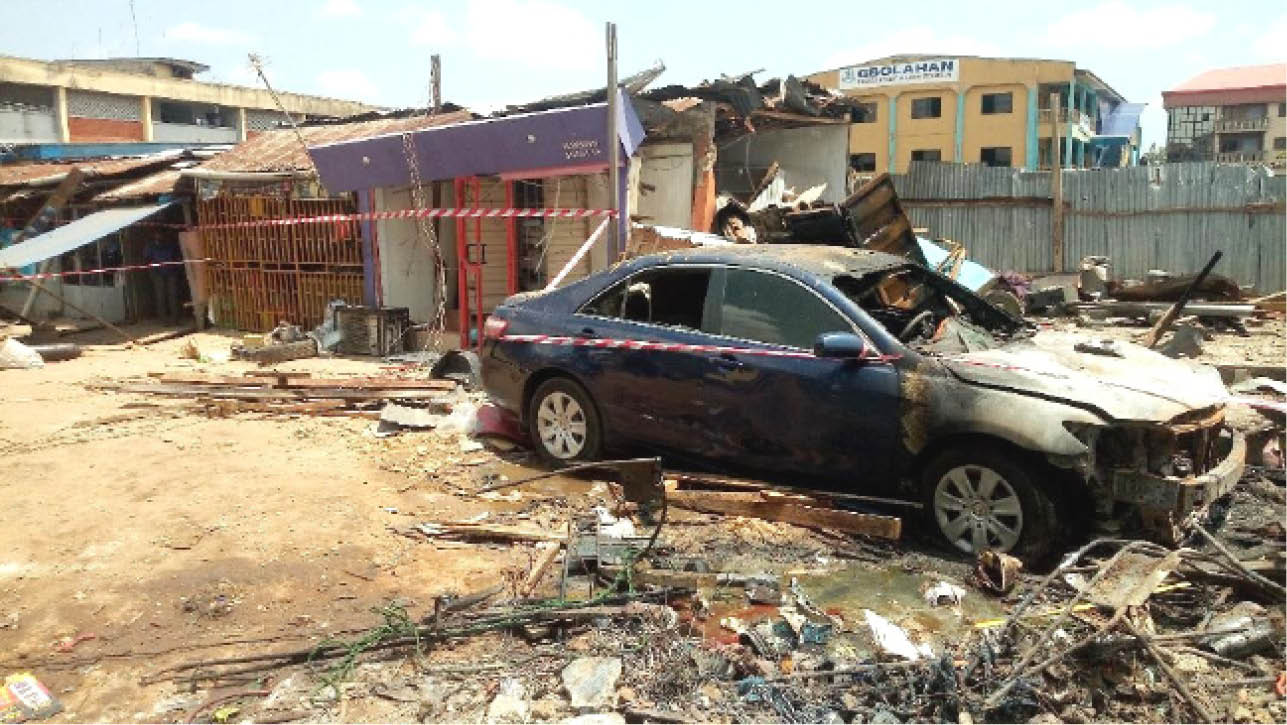 Shop of IK a tailor destroyed by the blast at Inua Mohammed street, Ajao Estate in Lagos

Traders in Inuwa Muhammed Street, Ajao Estate in Lagos metropolis are still counting their losses, almost a week after a gas explosion wreaked havoc in the highbrow area.

The explosion, which claimed the lives of three persons and injured two others last Tuesday, also destroyed property worth millions of naira.

Twenty shops and four vehicles were consumed by the inferno, which started about 6.30pm.

A mechanic, Taiwo Kareem, who lamented the loss of a vehicle belonging to one of his customers, told our correspondents that he was working on a car when he heard the explosion.

Kareem said, “I was putting back the radiator of the car when I heard the sound of the explosion.

“Unsure of what was happening, I ran out of the place as fast as my legs could carry me. In a twinkle, a big fire had engulfed everywhere, including the car, a Toyota Corolla.

Another explosion occurred minutes after the first blast. It was the second blast that sent fire into other adjoining shops. I don’t know where to start from.

Everything I laboured for have gone down the drain. My life is ruined.’’

Investigation by our correspondents revealed that the deceased persons were the owner of the gas shop, identified simply as Mrs Adeyanju, her daughter, and a trader known as Alfa.

An unofficial source told our correspondents that two other persons, said to be fashion designers, also died from the explosion.

Daily Trust Saturday learnt that Mrs Adeyanju had closed for the day, about 6pm and was already driving home with her daughter in her newly purchased car, when Alfa, who was in a tricycle, accosted her in the street, by Afariogun junction, Ajao Estate.

Alfa was said to have pleaded with her that he needed gas desperately for a job. Consequently, Mrs Adeyanju was said to have caved in to his plea, reversed the car and driven back to the shop to attend to him, together with her daughter.

According to traders who spoke with our correspondents, the woman stood by the shop door while her daughter filled the cylinder.

As Alfa was taking the cylinder to the tricycle that brought him and parked in front of the shop, the cylinder fell from his hand and the next thing that happened was an explosion.

Eyewitnesses described the incident as horrible. They said Mrs Adeyanju’s mangled body was found beside her new car, which she bought barely a week ago.

The rescue party was said to have discovered Alfa’s head hanging on the second floor of a three-storey building, opposite Mrs Adeyanju’s shop.

“It was a horrific sight. Her daughter was torn into two,’’ Razaq Owolola, a shop owner said.

A panel beater, who did not want his name mentioned, said it was possible that the cylinder had expired; hence the explosion. He noted that the gas dealer had been in the business for over 10 years.

A food hawker, who gave her name as Tawa and claimed to have known Mrs Adeyanju very well, said, “Alhaja had three kids. Her first daughter was earlier with her that day, with two of her grandchildren.

“Her grandchildren had left already, leaving Alhaja and her daughter to close the shop for the day.

“They had already gotten to the junction of the street before she was stopped by Alfa, who wanted to buy gas and pleaded he had some work he needed to fix before Sallah.

“Since he was a regular customer, she reversed and told her daughter to attend to him.

Meanwhile, the tricycle rider had left his vehicle there to quickly go to Asa Afariogun Street for a quick bet called Baba Ijebu.

Tawa said she also knew Alfa as a panel beater in an area called ‘Under’ in the Chivita area of Ajao Estate. “On Monday, he had a minor accident while working on a car. That should have given him a sign,” she added.

Also commenting on the incident, a young man who pleaded anonymity said, “The explosion happened because the industrial gas cylinder Alfa filled at Alhaja’s shop was already hot before he took it to her.

“If the cylinder was not hot, there was a probability that the explosion wouldn’t have occurred when the cylinder fell. As an eyewitness, I will say that five people died – Alfa, the woman and her daughter and two fashion designers.”

Victor Chekwas, who sells bags and boxes in Asa Afariogun Street, told our correspondents that, “All shops around the vicinity that had glasses were affected.

“My shop was also affected. I sustained an injury on my leg. When the explosion happened, I didn’t immediately realise that I was wounded because I was trying to salvage my goods. We are appealing for help because a lot of damage was done. Many people were injured.”

The Eze Ndigbo in Ajao Estate, Fred Nwajago, also appealed to the Lagos State Government to assist shop owners who were affected. He advised the government to deny approvals on proposals for gas, kerosene and petrol stations to be located in residential or industrial areas.

“Anything that can cause loss of lives should not be allowed where people are living or doing their businesses,” Nwajago said.

The owner of the affected shops and manager of Gbolahan Primary School, Lawal Ajibola, an engineer, claimed he was not aware that Mrs Adeyanju was selling oxyacetylene carbide in her shop.

He insisted she told him and the school management that she was selling building materials and keys.

“We heard a blast and rushed to that place. I was not aware that she was selling carbide or had cylinders in her shop. The cylinders were not displayed outside.

“I am an engineer, so I know the implications of selling such things here. I would never have tolerated that if she had disclosed something like that.

“I was trying to avoid being tagged an overbearing landlord, and that is why I don’t enter people’s shops to ascertain what they really sell. That is the danger of not declaring what you have in your shop.

“I was based in Port Harcourt and took over the management of the school here about five years ago when my father became aged. Mrs Adeyanju had been here since I was a child going to school. When I took over, I didn’t see any cylinder or carbide at all with her. The cylinders are not cooking gas, they are industrial.”

A resident of the area, Abiodun Olusola, who lost his two-bedroom house to the inferno, urged the government to come to the aid of the community.

The acting head of the LSFRSA, Mrs Margaret Adeseye, said the agency recovered three adults – two females and a male, while two people with various degrees of injury were rescued alive and taken to the hospital.

Adeseye added, “The fire that emanated from the explosion severely burnt two cars, a Toyota Camry and Kia saloon, with registration numbers, LSR 825 FA and EPE 212 CA respectively, a tricycle and some shops.’’