How frog meat is gaining popularity, patronage in Nigeria

Edible frogs are said to be among the best cuisines of many places in Nigeria and abroad. Like other aquatic creatures, frog meat is stewed,… 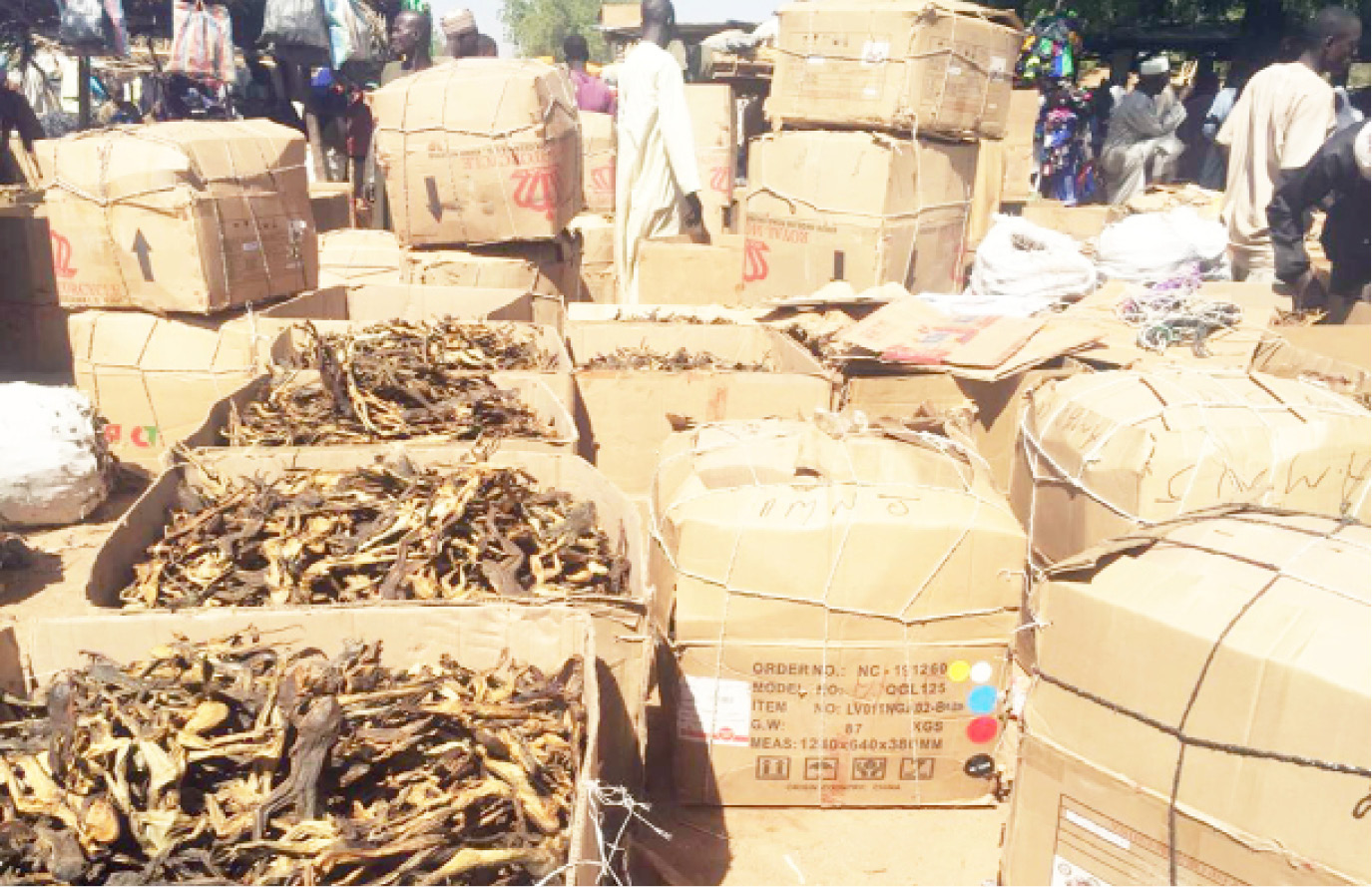 Cartons of frogs at Bunza Market

Edible frogs are said to be among the best cuisines of many places in Nigeria and abroad. Like other aquatic creatures, frog meat is stewed, fried, roasted or grilled. While some species taste like fish, others are comparable to chicken.

Apart from health benefits derived from the consumption of frog meat, frog business flourishes in some states in the country. It has now assumed international status, such that traders make significant profits on a daily basis.

Speaking on the nutritional benefits of frogs, a dietician, Sarah Abagi said some people were just waking up to its consumption but it has always been there. She said frogs were a very good source of protein, and like any other animal, it also contains minerals that are good for the body.

She said frogs could easily be differentiated from toad through its smooth skins and long legs, adding that toads are not edible.

“Toad is not edible because it contains venom, which is harmful to the body. The skin is rough, and they are found on the land, unlike frogs, which natural habitat is water,’’ she said.

Abagi, however, said frog farming had not taken place in Nigeria probably because of the taboo some people attach to certain food and animals in some tribes, or some religious beliefs.

“We are yet to see if our people have disabused their minds from frog and embraced its nutritional value. People need to understand that it is a good source of protein,’’ she added.

“It is a good source of mineral elements, such as calcium, potassium and sodium. Research shows that edible frogs are good for man and his animals. According to research, anti-nutrient content in edible frogs is very low when compared to other meats; hence it has less side effects,’’ he explained.

Ahmad said edible frogs could be identified by long legs and streamlined bodies; and it could be found in freshwater, swamp and ponds, adding that it is omnivores and comes in brown, black, tan and green colours.

“Skin type is permeable with top speed, and its lifespan is between 5 to 15years,’’ he added.

According to him, frogs are caught at different locations in the state, including Zabarmari and Konduga, as well as the Lake Chad area of Baga. He said those who hunt for frogs do so between November and January when the weather is still moist and warm, adding that it is often done both day and night.

“Frogs are hunted in large quantities and smoked after removing the intestines and loaded in cartons and supplied to consumers. They could as well be arranged and roasted on sticks without removing any of the internal organs.

He said that despite the spate of insurgency in the state, the demand for frog meat and meals had continued to increase among consumers.

He added, “The meat is edible and medicinal. This explains why the demand is high in so many parts of Nigeria and abroad. Some of my customers have confided in me that the meat could be used in curing typhoid.

Frog meat is scarce in this market because of short supply. The hunters are afraid to go to locations far from town because of the activities of insurgents. Many people in places where frogs are found have also been displaced. The supply chain has been disrupted because hunters cannot get enough, and retail outlets are almost dormant.”

Another buyer, Sani Sale, said frog contained a lot of oil which, when extracted, was sold in large quantities and could be used for cooking and medicinal purposes. He said frog meat could be used in treating calcium deficiency in the body.

A woman who consumed frog meals said the meat tasted like fish.

In Bunza town of Kebbi State, frog is one of the most flourishing businesses as commercial activities have since assumed international status.

Daily Trust on Sunday learnt that the business started in the town in the past 20 years, and traders now get their supplies beyond the local outlets, as far as Niger, Benin Republic Ghana and Mali.

Due to the scarcity of the edible species in local water bodies in Bunza, some neigbouring local government areas, as well as some parts of Zamfara State, hunters are forced to exploit other African countries for the commodity.

It was also learnt that the closure of land borders by the Federal Government of Nigeria affected frog business as supplies dropped significantly. However, few people smuggled the commodity through porous borders.

Our correspondent was also told that, like most parts of the North, frog business was received with apathy in Bunza.

Those who took part in marketing the commodity were not only stigmatised but called all sorts of unprintable names. Even their family members were not spared. But over the years, when the business was accepted among the Hausa Muslims, it has now become the most money- spinning business in Bunza. It is now a big market that accommodates both old and newcomers.

People from the western part of the country – Oyo, Lagos, Osun and some parts of Kwara states – are the major buyers of the commodity from Bunza.

A quality checker of all the products coming into the frog market in Bunza, Hamsu Dogo, told Daily Trust that he had been in the frog business for the past 25 years, and that the business had grown steadily.

Dogo said when they introduced the business in Bunza, it was not only rejected by the community, they were also stigmatised and seen as the poorest of all. According to him, residents argued that frogs were not meant for human consumption and that anybody who ate it would suffer severe consequences.

He, however, added that the narrative changed when the business started paying off and many people joined the once forbidden venture.

According to him, whoever wants to enjoy the maximum benefit of the frog business should begin with sufficient capital because the more one invests, the better turnover one makes.

“When I started the business, a carton was sold between N2,000 and N2,500. At that time, we could not market our products freely, even though we are natives. I am an indigene of the neighbouring Kalgo Local Government Area, and we were stigmatised to the optimum.

“But now, there are over 100 businessmen marketing frogs, who are natives of Bunza and adjoining communities. Some of the natives who are only into hunting the frogs could go as far as other countries like Niger and Benin. Some have even relocated to Ghana and Mali. The beauty of it is that when they gather their stock they supply to Bunza market. However, the supply is not regular as they must have stockpiled before ferrying them to Bunza.

“On a normal market day, about 10 fully loaded vehicles leave Bunza for the western part of the country. Most buyers pay through bank transfer,’’ he said.

A buyer from Osun State, Abdulateef Abdul’Aziz, told our correspondent that he started the business in 2019. He said it was not easy but he persevered and his capital had increased tremendously.

According to him, the business is profitable; hence he will continue.

“Frog is nutritional, and it attracts good patronage. My consignment always arrives in my state on demand. I am also planning to partner with a trusted person who would be buying and sending the stuff to me,’’ he said.

Frog meat is becoming a popular delicacy among the Tiv people of Benue State. However, there are some Tiv who will not forgive anyone that serves them the stuff.

In the local parlance, names such as Ifam, Atôngô-Gba, Ikpam Jande and Chinese meat are attributed to the frog delicacies.

There are basically three ways frog is consumed in Benue. The first and the most popular is the peppered type, which is usually without stew and can be eaten with or without pounded yam. The second is preparing it in stew, while the third is a combination of melon (egusi).

Most evenings, peppered frog meat can be seen in nearly all the markets in Tiv land. This is, however, with exception to Gwer West, Gwer East and Guma local government areas. Although things are now changing, people in those areas take strong exceptions to frog delicacies.

Most of the frogs marketed in the state are brought in from other locations in the country and abroad. The reason is that it is not obtainable in the state in commercial quantities.

Shiekuma Gemade, who has been involved in hunting for the frog in the Gboko area of the state, told our correspondent that there were three basic locations in Nigeria where frogs are found in large quantities – Kano, Jigawa and Taraba.

Gemade, who also travels to Niger Republic for the same purpose, named countries such as Cameroon and Chad as sources.

He disclosed that there were over 1,000 registered members of the Association of Frog Traders in the state, in addition to countless others who do not belong to the union.

He said the prices of frog varied according to sizes. According to him, small sizes on stick goes for at least N600 while the biggest size can be traded for as high as N1,600.

Gemade further explained that in different locations, frogs are not popular among the locals, except lately that few people are beginning to take interest in the business because of the economic value it attracts. He added that locals in such areas don’t even hunt or trade in it.

He said he was planning to move to Kano in February next year for hunting.

“Frog was not popular in the 1990s. That is no longer the case today because things have changed. It is becoming popular by the day. Apparently, people have tasted it and found that it is delicious.

It is profitable. Although there is low patronage now due to Christmas festivities in view of available other sources of meat, patronage will definitely go up.

Through this trade, I am about to build my own house. I have a motorcycle and I am paying my children’s school fees, four of them,’’ he said proudly.

For Mercy Terkula, who was on her way to Gbor market in Kastina-Ala before she spoke with our correspondent, she has been dealing in frogs for eight years now. Apart from trading in it, she enjoys eating it.

However, the big challenge associated with the business is travel expenses and frustration. Until now, not many drivers would agree to transport it, especially, Hausa people, Daily Trust learnt.

“Although it is not ‘haram’ to them, they don’t like it. However, it is becoming popular,’’ Gemade concluded.