For half a decade, the financial services sector has changed dramatically, yet it seems to remain hot and evolving. Like a wildfire, what started with… 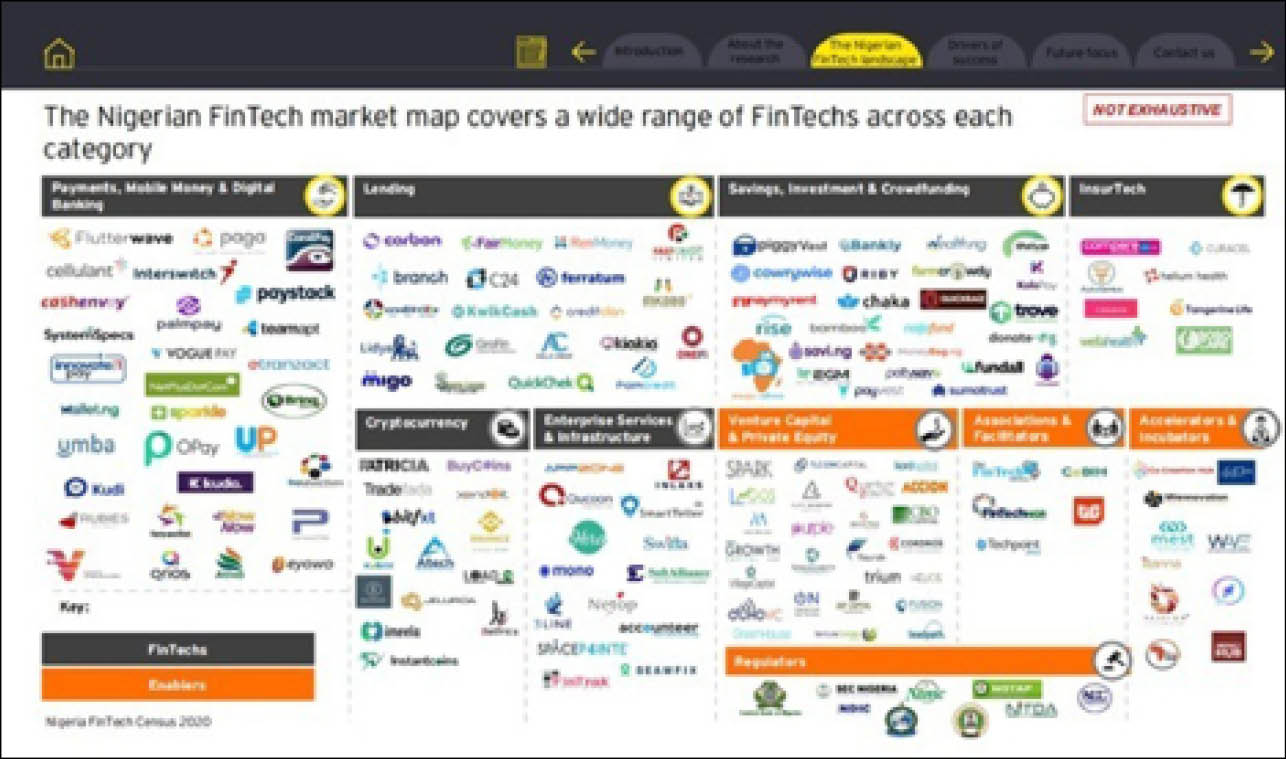 Industry sources estimate that Nigerian Fintech companies in 2020 alone raised $439m, an amount said to be equivalent to 20 per cent of the amount raised by all African tech startups. This has led to Lagos, where most of the organisations are based, being called the capital of Africa’s Fintech.

Investors in these companies are not necessarily expecting immediate returns. But there are attractive valuations that suggest rising profitability in the future. For instance, Nigerian Fintech revenue is projected to rise to $543million by 2022, driven by increasing smartphone penetration and the unbanked populations.

In a market where more than two-thirds of the population are excluded from basic financial services, there are obvious voids, and those are the gaps that continue to fuel innovation in the market as youthful and energetic talents continue to seek new ways of solving perennial problems to daily lifestyles.

More than ever, there are three major problems Fintechs often aim at solving: time to complete a transaction, the stress of getting it done, and sometimes exorbitant costs; hence, the value propositions are often anchored on the need and possibility of doing something at a faster pace, in easier ways and at a cheaper cost.

Of course, we now live in a fast-paced world when youths, especially the GenY and GenZ want something immediately. Moreover, the world is increasingly liberal, and freedom is the buzzword, so nobody wants to be restricted or stressed because of a financial transaction. So if you can get a transaction done on your phone in the comfort of your room, why not, and why do you have to travel miles, wasting otherwise productive time and other scarce resources to a brick-and-mortar office?

At a time when the inflation rate is at the highest ever over the past three decades, why would anyone want to pay a higher cost for a transaction that can possibly be done for free or at a low cost?

From savings to lending, payments and insurance, youths from different fields of life and varied experience have launched different applications to rival traditional players. Indeed, the banks have got a run for their money, and Fintechs seem to be unstoppable in their quest to cannibalise banks’ revenue sources.

While banks are focused on traditional customers, Fintechs are focused on the under-banked and unbanked populations, thus creating a network effect across all spectra of customers, including already banked customers, who are switching to experience the speed, comfort and cost-efficiency. For instance, it takes days to send money from the United States to Nigeria; worse still, it costs an average of 5 per cent of the value to send the money home to families and loved ones.

However, with one of the Fintechs offering an instant remittance and conversion of foreign currency to naira at a parallel market rate, it exposes the inefficiencies of traditional players and banks in facilitating cross-border payments and remittances from Nigerians in the Diaspora.

While payment solutions still dominate Fintech space, accounting for over one-third of the industry as a regulatory drive for financial inclusion and cashless policy provide the impetus for the growth of these digital service providers, lending and investment offerings have become new targets, and are encroaching on both private and public markets.

What started as an enabler for traditional players has rapidly grown to become new competition for banks and conventional asset managers, especially microfinance banks, which are now caught in the web of the new competition, as many of the Fintechs directly or indirectly pick up licenses with the Central Bank of Nigeria (CBN) and the Securities and Exchange Commission (SEC) to break regulatory barriers to their business models and enhance customers’ trust and confidence in the platforms.

Luckily, improving telephone and internet penetration are complementary and reinforcing for Fintechs, especially as the poor user experience with traditional service providers has been a driving factor for Fintech adoption among digital-savvy youths, who currently dominate Nigeria’s demographics, accounting for over half of the population. Interestingly, the frenzy is not limited to Nigeria, with foreign investors seeking to buy into the fast-growing digital opportunities in the country.

In what started with Interswitch, which was valued at $1billion in 2019, a valuation that is termed “Unicorn” status in the digital world, Paystack, a company founded in 2015, sold a 10 per cent equity stake at $200million in 2020, equally valuing it at $1billion and ranking it as a Unicorn. O’Pay is another giant in the space as it revolutionises the payment ecosystem with its point-of-sale terminals, which many have termed to be small banks.

Many other Fintechs continue to attract capital across the borders, including Branch and Kuda, which raised $170million and $10million respectively in 2020. The biggest of them all is Flutterwave, founded by Olugbenga Agboola, which in February raised an additional $250m at a valuation of over $3bn, a price that dwarfs the market capitalisation of all Nigerian banks listed on the Nigerian Exchange.

Flutterwave, which helps over one million businesses, mainly small and medium enterprises to process payments in 150 different currencies, has its infrastructure across 34 countries on the continent and has processed more than 200million transactions worth over $16bn.

Unlike traditional companies, investors are not focusing on the profitability of Fintechs at this time, rather, they are buying into the growing penetration of the platforms.

It is exciting that the telco giants are not unaware of the frenzy and indeed ready to participate in the opportunity, with MTN and Airtel taking bold steps to secure payment service bank licenses from the CBN, with the hope of providing end-to-end financial services to the teeming customers who already trust their networks.

However, Ernst and Young, in collaboration with the Fintech Association of Nigeria, recently observed in their nascent report on the landscape, that the burgeoning success of the Nigerian Fintech market may be impaired by four key themes: talent, capital, demand, and regulation.

With the fragmentation of the industry, many Fintechs are struggling to hire the right talent, thus slowing down the innovation and execution power of many Fintechs over the past two years, especially as the rising migration of professionals continues to deplete available skills in the local market.

Of course, one factor that has stimulated the growth of Fintech is the ability of the sector to attract capital, especially foreign capital from Angel Investors and Venture Capitalists, including the likes of YCombinator, which has not only provided capital support to a number of Nigerian Fintechs but also groomed them through its incubation programme.

With rising inflation and interest rates across the developed markets, there are concerns that capital flows may halt for a while. Whilst local institutions such as Assets and Resources Management (ARM) through its ARM Lab are offering $120,000 to qualified Fintechs, it may not be sufficient to sustain the euphoria and pace of growth of the Fintech ecosystem.

Similarly, with the failure of some purported Fintechs in recent times, regulators, especially the CBN and the SEC, may review their relatively docile stance, thus raising concerns that Fintechs may become dinosaurs and perhaps less efficient once subjected to same or similar regulations as the traditional players.

Like a zero-sum game, whilst Fintechs are attracting capital, traditional financial services companies are losing capital, including the big banks listed on the Nigerian Exchange, which are poorly priced.

While O’Pay, whose business volume is still less than Firstmonie (FirstBank’s agency banking network) is valued at $1bn, the entire FirstBank Holdings Plc, which includes its commercial and merchant banking operations in Nigeria and offshore, was valued at less than half a billion dollars.

Whilst profitable and fast-growing, fast-moving consumer goods companies are thirsty for capital for growth, Fintechs are attracting more than ever imagined, a dynamic that reinforces the prospect of Nigeria as an attractive investment destination.

With foreign direct investment at historic low levels, it may be useful for the government to seek a new approach towards attracting foreign capital, with the hope that the youthful energy and innovation being leveraged in the Fintech space can be channelled to the real sectors of the economy, where capital is mostly needed to stimulate productivity and create jobs for the youth.