In the middle of the day on Saturday, February 13, Mallam Ummaru and some of his friends and neighbours were approached by a girl running… 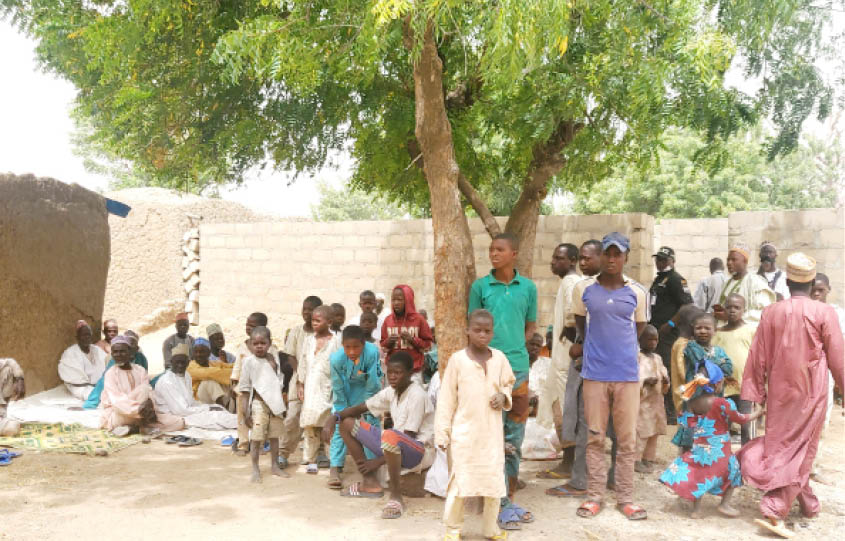 In the middle of the day on Saturday, February 13, Mallam Ummaru and some of his friends and neighbours were approached by a girl running fast from the edge of the village.

Like other residents of Magamin Diddi in Maradun Local Government of Zamfara State, Mallam Umaru spend most of the day these days perching from one shed to another, rummaging over the fate that has befallen their village lately.

Incursion of armed bandits has confined residents to their homes, with the detachment of soldiers, deployed to the village after a devastating attack in December, serving as the only shield for the village against lurking bandits.

The little girl, Hasiya had come to tell the older men that “something had stricken the legs of some of her peers and they fell down, unable to move,” Umaru recalled in an interview with Daily Trust on Sunday at the village.

He and others who were under the neem tree dashed along with Hasiya to see for themselves what the issue was.

On arriving, the elders met four bodies of the community’s young ones on the ground, five of them, were lifeless, five were struggling in different degrees of pains and injuries. The spot was just some 300 metres away from the edge of the village on the eastern side.

“The soldiers ran down to the scene after us. They were distraught as they caught sight of the damage. Their commander was in tears,” said Mallam Ummaru.

What happened that afternoon, Daily Trust on Sunday gathered, was an explosion from a device planted by the soldiers, which was targeted at Fulani bandits terrorising residents of Magami.

A mass attack on the village in December brought to fore the dangers the villagers were in and the Zamfara State Government responded to the attack by mobilising for a deployment of soldiers to the village.

Despite the presence of the soldiers, the adamant attackers were not yet giving up and routinely attacked villagers.

First respondents, assisted by the Army personnel, immediately arranged to rush down the wounded to the hospital in Mafara.

“When they reached Mafara, two more of the kids were pronounced dead,” a local vigilante in the village said. That increased the figure of those killed by the explosion to seven.

Residents told our reporter that the 10 children affected by the explosion were in the outskirts to collect stalks for use as firewood.

At the last count, seven of them were killed while two were still on admission at the General Hospital, Gusau. One other who sustained mild injury was back home.

Four of the deceased were females, while three others were males.

When Daily Trust on Sunday visited the spot where the explosive went off, blood stains still dotted the dried sandy field.

Abandoned shoes, some of them dented with blood, were scattered around, reminiscent of how the device threw off the victims within the circumference of the incident.

A few stalks were there as well, and a little rope, obviously meant for tying up whatever stalks they were able to gather from the dry fields.

More devastating is that all the seven kids who lost their lives were from the same family. Four of them were of the same parents while three others were their cousins.

Mallam Ummaru, the leader of the extended family said, “There is nothing to say but to submit to the will of Allah. This was fated to happen, but it is traumatising and difficult, especially for their mothers.”

He said two other siblings of the deceased were still in the hospital, along with one child from another household.

Another affected parent, Alhaji Sadau Magami, said the incident was a test from God, explaining that residents were warned against going into the bush. “But as it was destined, our children went there,” he said.

Alhaji Sadau also appealed to the delegation and other authorities to keep an eye on the town. “They should please look after Magami, the bandits are around us; we see them always. If the soldiers are removed from Magami today, this town will be overrun,” he said.

Although the platoon commander would not talk on the circumstances that led to the explosion, Mallam Ummaru told our reporter that the device was planted by the soldiers when they were alerted that bandits were approaching the village from that axis.

“The soldiers tried for us. For two days they combed the area in search of the device, but they could not locate it,” Ummaru recalled.

He said the commander was so disturbed that he cried openly. “We had to console and remind him that it was an act of God. God who created us had destined that they would lose their lives that way,’’ he said.

He said they reminded the commander that as parents, they knew the target was not their children and soldiers had made announcements that children should not go far from their homes and should not pick any unknown object.

He said it was unfortunate that children from that part of the village were not aware of the warning.

On Wednesday, a delegation of the Zamfara State Government, led by the Secretary to the State Government (SSG), Alhaji Bala Bello Maru, visited Magami, where they condoled the affected residents on behalf of Governor Bello Matawalle and extended cash donations to the grieving parents.

The delegation addressed residents of the village at the residence of the district head, Alhaji Abubakar Abbas, who appreciated the support and concern shown by the state government, while also highlighting that the village still survives under threat.

Speaking during the visit, the commissioner for security and home affairs in the state, Alhaji Abubakar Dauran, said it was not the intention of the state government to always send delegation on such missions, noting, however, that it was a mark of improvement on security situation in the state that such visits could be made.

“You all know that in the past, when an attack occurred, no one would dare travel for condolence, yet this is not our wish. Our wish and that of the governor is for a lasting peace all over the state. We want everywhere to be peaceful and for people to be able to go to their farms and live their lives normally,” he said.

Dauran said the state government was hastening its peace deals with bandits to bring an end to the hostilities, saying, however, that whoever did not accept peace among the attackers, government would find a way of dealing with them.

When the delegation visited the palace of the Emir of Maradun, Alhaji Garba Mohammed Tambari, the SSG assured of government’s commitment to end the spate of insecurity in the area and the state in general. He announced a N3million donation to parents of the 10 identified victims of the explosion.