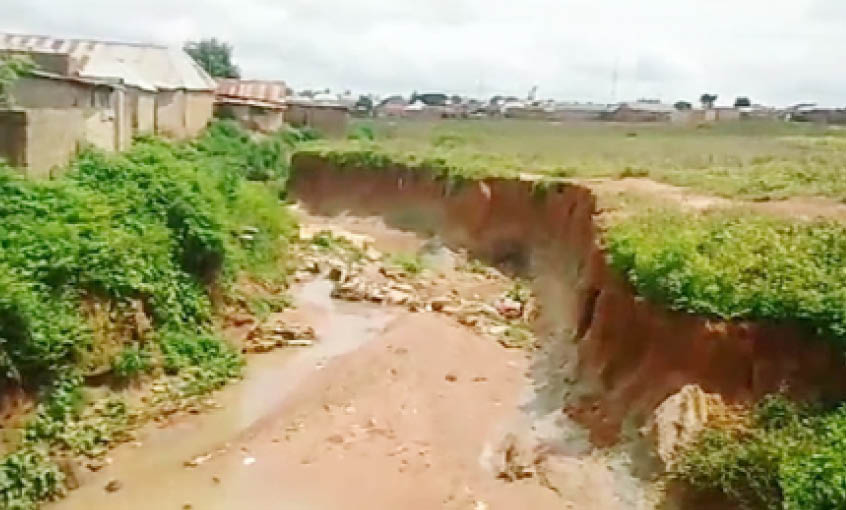 Hanging from a visible round hole created by a gully erosion that has consumed part of a cemetery in Hayin Toro-Toro community of Igabi Local Government Area of Kaduna State is a burial shroud that has lost its shine. The hole, now empty, residents said, is a proof that the corpse which once occupied the burial chamber had slipped out and flushed out by a heavy downpour into the waiting gully.

Residents of Hayin Toro-Toro told Daily Trust Saturday that in the last few weeks they had been faced with a most disturbing development as heavy downpour continued to destroy its over 40-year-old graveyard, forcing out corpses and other body parts into a ditch. They said dogs that roam the graveyard had taken advantage of the situation to feast on the corpses that were washed out their graves.

“As neighbours to the cemetery, we hardly sleep when it rains,” said Malam Muhammadu Na Abas, an elder in the community. He added that through community efforts they often gathered remains of washed out corpses to rebury.

Our correspondent who visited the community observed that the cemetery lies between two parts of the Hayin Toro-Toro community, which is situated on a hilly landscape. The erosion that is now threatening to consume the cemetery was formed by a waterway that sloped from the community to its base, where the cemetery is located.

It was also gathered that many of the graves affected by the erosion have existed for at least 40 years when the land was converted into a cemetery.

“Two days ago, it rained and we saw a body part washed away. We have tried as a community to do what we can, but this is beyond us,” Malam Na Abas said, adding that unless something is done soon, the erosion will not only consume the cemetery but their homes.

Another resident of the community, Ishaka Usman said, “You can even see that the erosion is beginning to affect our homes as it expands. You can see for yourself how four rooms in my house have fallen, including the wall.”

Rabiu Taro-Taro, another resident who lives not far from the graveyard said some 10 years ago, what has become a major challenge for the Hayin Taro-Taro community was non-existent.

“The situation became worrisome some four years ago. We have been battling erosion as a community, but about four years ago, it started flushing out corpses and we always try to rebury them,” he said.

As part of their community efforts to arrest the situation, Rabiu Taro-Taro said, “We decided to come together and construct a drainage to divert the water from entering the cemetery. We also advised other residents to construct drainages in front of their houses to reduce the pressure of water going into the cemetery, but only few people have agreed to do this.”

“Through community efforts we constructed culverts to divert the water from entering the cemetery even though some people have been complaining that diverting the water will affect their houses.

“I always tell them that we are the living, we can fix our houses but we must save the dead who are buried at the graveyard. What is happening is worrisome,” he said.

He further said the community had forwarded its complaint to the village head, who promised to take it further to the necessary authorities.

“We always contribute money and also solicit financial help within the community to purchase the sand we use to refill the affected parts of the cemetery and rebury the dead bodies,” he said.

He also urged other residents who do not have drainages in front of their houses to do so to help save the cemetery.

With about 147 erosion sites that cut across the 23 local government areas in the state, the director of the Kaduna State Ministry of Environment, Yusuf Mu’azu, in early 2022, disclosed at the Nigeria Erosion and Watershed Management Project (NEWMAP) stakeholders advocacy and sensitisation meeting, that the state government was working to address gully erosion and challenges of soil degradation in affected communities.

Findings by Daily Trust Saturday revealed that the cemetery at Layin Bilya, within the same Rigasa community of Igabi Local Government Area has equally been eaten up by erosion. This was reinforced by the state chairman of the Association of Volunteers for the Protection of Graveyards in Kaduna State, Alhaji ýAbdullahi Mohammed. He said graveyard volunteers had been worried about the poor state of Hayin Toro-Toro cemetery, adding that other graveyards with similar problems include the one at Layin Bilya and another at Hayin Danmani, all within the local government area.

He appealed to God-fearing residents, philanthropists and the local government council to come to their aid by protecting the graveyards.

On his part, the chairman of Igabi Local Government, Jabir Khamis, said he had been informed that dogs often dig out exposed graves to feed on corpses, a situation he described as disturbing.

Khamis said he led a team of officers from the Federal Ministry of Environment on an inspection to the graveyard last year, adding that the entire area was prone to erosion.

“We snapped some pictures for documentation and all that needed to be done was done, not only at the Hayin Toro-Toro but other areas too. In order to save the graveyard, I also provided sand, which was used to refill some holes ýat the graveyard. We also fumigated the cemetery because nothing can be done at the cemetery without fumigation due to grasses in some parts,” he said.

He, however, said the problem at the cemetery was beyond the council and would need the intervention of the NEWMAP.

He said, “Let me be honest with you, the local government cannot handle the erosion alone because in the five years I have been chairman, I have not received any ecological fund. However, I learnt that very soon, the funds would be disbursed to address erosion issues.”

On finding an immediate solution to the challenges at the cemetery, the chairman said he recently visited the area and took additional photos, which were forwarded to the Kaduna State commissioner for local government and chieftaincy affairs.

“This is because Igabi Local Government is the largest in the state, in terms of size and population. But this issue is beyond the local government,” he further said.ý

He, however, assured residents that his administration would do its best with the little resources at its disposal to divert the water going into the graveyard pending when the ecological fund would be made available.