In the yesteryears, it was a herculean task for schools to accept kids below the age of six to the classroom, neither will any parent… 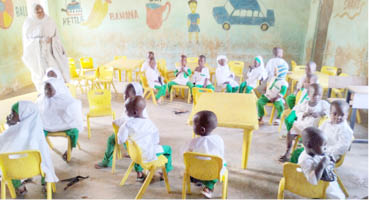 In the yesteryears, it was a herculean task for schools to accept kids below the age of six to the classroom, neither will any parent send a child of two or three years to school. That was simply because it was believed that a child below six years could not be left outside the care of the parent.

But with the progressive development in education and the desire of many mothers to pursue careers and business interests, the concept of sending children to crèches began to gain popularity and, today it is possible to see kids below the age of one in a crèche.

This development was initially obtained only in private schools and individual creches before the federal government saw the need to enforce the adoption of Early Childhood Education (ECE), in preparation for primary school.

It aims at the holistic development of a child’s social, emotional, cognitive and physical needs in order to build a solid and broad foundation for lifelong learning and well-being.

Also, it emphasises the need for children to be enrolled in play-based learning schools between the ages of two to five before they can be moved to the pre-primary level.

Speaking to journalists during a two-day media dialogue organised by the United Nations Children’s Fund (UNICEF) in partnership with the Child Rights Information Bureau (ICRIB) of the Federal Ministry of Information and Culture, on ECE in Sokoto recently, the State UNICEF Chief Field Officer, Maryam Darwesh, said the federal government’s Early Childhood Development Policy aims at creating an enabling environment for the provision of integrated ECD services and coordination mechanisms among sectors at decentralised levels.

“Nigeria has made some progress in the implementation of this policy. Despite the progress, there are still some challenges, which include low awareness and understanding of the importance of ECD, poor articulation and clarity of the policy, weak coordination among the relevant agencies, and, most importantly, poor funding,” she said.

She lamented that there was no line budget for ECE in the states, saying, “What we have is a budget for primary education.”

While experts stressed the need for parents to enrol their children in play-based learning schools to enable them to develop better, learn faster, and become successful adults, many parents are beginning to see the need to educate their children at an early age, though some are yet to fully buy the idea.

Meanwhile, in Sokoto State, some parents have embraced the efforts made by the government, partners, and some members of the communities on the need to adopt the ECE and allow their wards to enrol in school at an early age.

Parents in Bodinga LGA of the state have remained resolute to ensure that their children get the required education and thus embark on advocacy visits to encourage more parents to embrace ECE at Ali Fodio Primary School, one of the centres of ECE in the state.

Speaking on their role in boosting the enrolment of more kids in ECE, a mother, Hauwa Abdullahi, said: “We, through the mothers’ association, take out time to go round the community to tell them the importance of allowing their wards to be in school rather than hawking. And that is yielding results.

“Many mothers now have seen the benefits of education through our little advocacy and allow their kids, even the ones that are less than three years, to come to school.”

She said aside from visiting parents speak to them in need to allow their wards to come to school, they also woo them by giving the children gifts from time to time.

“The gifts also attract other children who also want to get gifts, and so they come to school to get their own gifts. We also contribute money to buy things like school bags, uniforms and writing materials to encourage the children and their parents too,” she said.

She further said they also visit schools from time to time to monitor what is going on and to motivate the teachers to do their job.

Hauwa expressed satisfaction with the number of children who have enrolled in ECE which she tagged as about 150. She however said running the class is not free of challenges of space as they use only one class; and shortage of learning materials as well as inadequate teachers.

According to the School Based Management Committee (SBMC) chairman, Bawa Sani Bodinga, every SBMC member is expected to play a role in coordinating teachers and parents with the aim of improving the quality of education for their children.

He said they have been able to surmount the problem of getting parents to see the importance of educating their children because no development could be recorded without a good education.

“Technically, we initiated the platform through which we contacted the members of the public in this local government on the need to educate their children qualitatively.

“So we engage women’s organisations and house-to-house strategies; our women talk to fellow women in families about the impact of education, and that is the reason why we see the huge numbers of pupils in the ECE class.

“Our ECE is being monitored by women. This is because women are in the best position to care for the children as they have many techniques that men don’t have. That is why you see that most of the ECE classes are under the control of our female teachers,” SBMC chairman said.

On the role played by the SMBC, he said they looked out for problems, like broken windows and doors with a view to renovating them.

“We have the responsibility of bringing information to the public to say this is our position on the school, which is forwarded to the authority, and we can also seek donations,” he added.

He stressed that there are inadequate numbers of classrooms in the schools and that they are small kids and cannot be put outside, or under tree shades, he said the ECE is free and compulsory for pupils in all communities in Bodinga.

Meanwhile, the father of one of the pupils in Ali Fodio ECCDE class, Bashir Bala Bodinga, said his 4-year-old son, Ashiru Bashir, is more responsive and interacts better with his siblings about two months after he joined the ECE class.

He also said they need teaching aids and that one caregiver is not enough for the ECE class in the school.