How clashes between Customs, smugglers claim lives in border communities

Customs officials stationed at border communities across the country have been engaging in fierce battles with smugglers of different goods. 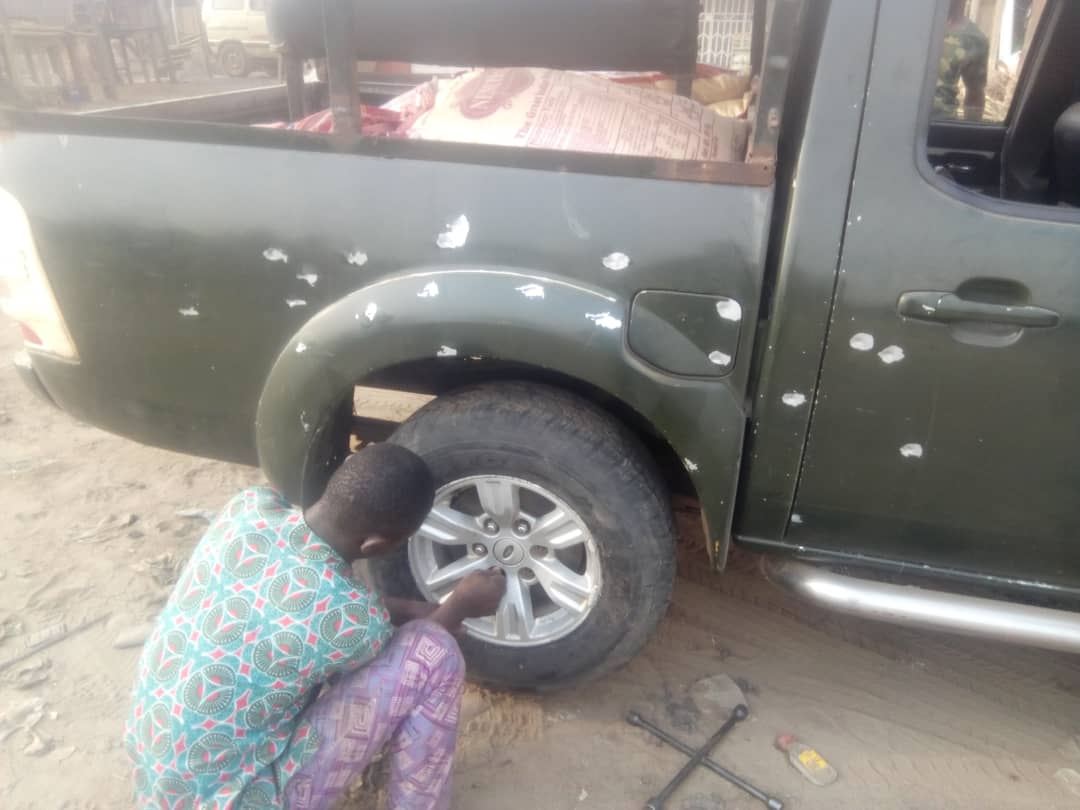 Clashes between officers and men of the Nigeria Customs Service (NCS) and smugglers at border communities have continued to claim lives and property, including vehicles and offices, Daily Trust reports.

Customs officials stationed at border communities across the country have been engaging in fierce battles with smugglers of different goods.

While the officials are saddled with the responsibility of protecting the borders from infiltration of contraband goods, arms and illicit drugs, smugglers device various methods of going against the law.

Apart from killing the alleged smugglers, Customs officials and innocent citizens are also losing their lives during altercations at border communities.

Besides gun battles with the smugglers, findings by Daily Trust Saturday showed that excessive speeding by the security agents while going after the suspected smugglers contribute to the casualties being recorded.

Sources said that in 2020, at least two Customs officers were either killed or injured every month, while innocent citizens were hit by stray bullets.

Our findings showed that from 2016 to 2020, most of the killings happened on the border communities in Jigawa, Katsina, Sokoto, Kebbi and Yobe states (that share borders with the Niger Republic); and Ogun and Oyo (that are close to the Benin Republic).

However, Ogun led the chart of states that recorded casualties as a result of the cat and mouse game between law enforcement agents and smugglers.

On December 22, Customs officers allegedly fired a shot that killed one person and injured three others at Ayetoro in Yewa North Local Government Area of Ogun State.

Narrating how the incident happened, an eyewitness said a driver of the federal operation unit of the NCS lost control while chasing some suspected smugglers on the highway and crushed the 35-year-old Mumuni.

“He (Mumuni) sustained serious injuries that affected his ribs, legs and face,” he said.

Corroborating the story, lawyer to the late Mumuni, Mr Kusanwo Ganiyu, said the Customs personnel took him to Ijaye General Hospital, but he was later declared dead at the Federal Medical Centre, Abeokuta.

Following the incident, the Ogun State House of Assembly, alongside members of the National Assembly from the state sought immediate intervention of Governor Dapo Abiodun, saying there was the need to address the incessant killing of residents of border communities by officers and men of the NCS.

Before then, a stray bullet had killed a boy who was playing football on a field on December 28, 2020. It was learnt that the incident happened during a faceoff between the NCS and some rice smugglers in the Oke Ola area of Ilaro, Yewa South Local Government Area of the state.

Also, on November 30, 2020, some hoodlums reportedly snatched a gun from a female soldier and held Customs officers hostage.

The incident happened in the Lafenwa area of Abeokuta when the officers intercepted a truck loaded with bags of smuggled foreign rice.

Trouble started when the suspected smugglers allegedly mobilised some hoodlums, led by a notorious cultist in the area, popularly known as Abacha.

It was learnt that men of the Nigeria Customs Service intercepted a truck with smuggled rice and took it to their office, but some officers were still in the area, so the hoodlums held them hostage.

The Divisional Police Officer in Lafenwa waded in, but the hoodlums insisted that they would only set the Customs men free after the truck was released to them. In the process, men of the NCS called for a reinforcement of soldiers and they clashed with the hoodlums.

It was further gathered that the gun the hoodlums snatched from the female soldier was recovered and those responsible arrested.

On October 23, 2020, youths and smugglers teamed up and chased men of the NCS away from their patrol bases, checkpoints and outstations in Ihunbo, Ilara and Imeko.

The areas became tense when the weapon-bearing youths invaded all the NCS checkpoints and outstations in Ipokia, Yewa North and Imeko-Afon local government areas of the state and set Customs tents ablaze.

The incident coincided with the #EndSARS protests that shook the entire country.

On October 3, 2020, a stray bullet from Customs officers reportedly killed a 50-year-old panel beater, Moses Atenda, in Oja Odan, also in Yewa North Local Government Area of Ogun State. He was hit inside his workshop.

On March 28, 2020, Sekinat Agbelade, 15, was hit by bullets from Customs officers in Agosasa village, Ipokia Local Government Area of Ogun State. The officers were said to be chasing suspected rice smugglers when they fired the bullets that killed the hapless girl, who was returning home from an errand.

Also, 15 other residents trying to scamper to safety for fear of being hit by stray bullets were said to have been injured.

On April 25, 2020, exactly three weeks after, a 25-year-old father of five, Kehinde Ogunji, was allegedly killed by Customs men in Agbon village, Yewa North Local Government Area of the state.

The incident sparked a row between indigenes of the community and Customs authorities in the state.

On May 1, 2020, a 17-year-old Rilwan Bello was killed by a stray bullet allegedly fired by Customs officers on the trail of smuggled rice and sugar, suspected to have been stockpiled in some lock-up shops in Owode, a community in Yewa South Local Government Area of Ogun State.

A source who narrated the incident said, “The Customs men broke into shops and evacuated hundreds of bags of sugar and rice. They embarked on sporadic shooting to ward off reprisal attacks, and in the process, one of their bullets hit the boy in the head.”

But the immediate past Public Relations Officer of the Ogun Area 1 Command of the NCS, Abdullahi Maiwada, had said the victim was a member of the Eiye cult group who attacked his officers.

“Some miscreants, suspected to be cultists, popularly known as Eiye Boys, violently confronted officers of the NCS, Ogun I Command’s anti-smuggling patrol team with assorted weapons at Owode.

“The team came across such hostility while peacefully performing their lawful duty. Smuggled 47 bags of sugar, 13 bags of rice (50 kg each) and three cartons of sugar stocked at a residence located on Owode-Idiroko road were recovered.

“In the melee that ensued, information available revealed that one of the suspected cultists died, while officers, including the team leader, sustained various degrees of injuries,” Maiwada explained.

The new Public Relations Officer of Command, Hammed Oloyede, said many officers had paid the supreme price in the course of discharging their duties.

He said that on December 3, 2020, a team of officers and men of the command were attacked while on routine mobile patrol in Olorunlere village, near Alapoti, Ado-Odo Ota Local Government Area of the state. He added that an official driver, Taiwo Odeyemi, went missing in that operation.

He said many officers were either killed or critically injured in the cause of discharging their legitimate duties.

Oyo, Kwara also in the spotlight

There were similar incidents in Oyo State. For instance, on August 14, 2020, a driver suspected to be a smuggler was reportedly killed by a joint task force of Customs, police and soldiers in Saki town.

The death of the suspected rice smuggler infuriated some youths who attacked Customs office, leading to the death of an officer, while their vehicles were burnt in the process.

Confirming the incident, the Public Relations Officer of the Oyo/Osun Command of the NCS,  Abdullah Lagos, said, “We heard about the incident but we are yet to know what happened. However, all of our officers are safe. The mob burnt our Hilux van and another vehicle at our base in Saki.”

The Police Public Relations Officer in the state, Mr Olugbenga Fadeyi, confirmed that the Customs officer killed was a member of the Joint Task Force (JTF).

Daily Trust Saturday further learnt that in some cases, smugglers mobilise hoodlums who would force officers and men of the NCS to retreat during operations.

On January 10, 2021, three persons were killed when hoodlums raided the base of the NCS in the Ilesha Baruba area of Kwara State. Many people, including a police sergeant, were said to have been severely injured.

The hoodlums were allegedly contracted by suspected smugglers to set the palace of the Emir of Baruba ablaze and burn the divisional police headquarters in the town.

A suspected smuggler, Abdul-Rahman Sani, was reportedly shot dead on November 10, 2020, by an officer of the NCS at Kamba border, Dandi Local Government Area of Kebbi State.

Residents said the suspected smuggler, a son of the village head of Budi was allegedly killed following an altercation with one of the Customs officers.

They said Customs officers on duty had intercepted Abdul-Rahman’s vehicle and he went for negotiation with them when he had an issue with the particular officer, who threatened to shoot him if he drew closer.

“The officer just shot him dead and it led to protests and chaos here in Bunza area because we lost a young man who was very kind and helpful to the community,” a leader, Alhaji Sahabi Chindo, said.

But the Public Relations Officer of the Kaduna zonal office of the NCS, ASC Mailafiya Magaji, explained in a statement that some irate youths carrying dangerous weapons attacked their men after they intercepted a vehicle loaded with bags of foreign rice.

“They tried to disarm one of the officers; as a result, a shot was fired, which unfortunately hit one of the youths on his left shoulder,” he said.

A security analyst, Dr Kabiru Adamu, said to avert incessant killings in border communities in Nigeria, Customs officers must consider intelligence as the most important mechanism.

“Intelligence will tell them who, what, when, and more importantly, where and how they can carry out proficient enforcement to reduce casualties. And even if the causality would occur, it would be for those that are suspects or those who perhaps either resist or attempt to harm Customs officials,’’ Adamu said.

He also said there was the need to get the support of the local population so that they would be the first protection for Customs men.

“It is the local population that will provide information and be the ones to stop any member of that community from attacking Customs men. Remember, the moment Customs officers are attacked, they must protect themselves, and when they defend themselves, it results in the killings.

On what the government should do to get the support of the communities, Dr Adamu said, “I have had interviews where communities would mention that they didn’t have any occupation or income-generating activity apart from smuggling. So, they consider smuggling as a means of living. And when the NCS is there to stop smuggling, the natural consequence is this kind of deaths.”

He advised the government to empower the people in border communities to engage in legal businesses to allow the NCS to carry out smooth operations in those areas.

He also called for synergy between the NCS and other security agencies in the country.

“Remember that the essence of good security architecture is cooperation. Lack of corporation among security agencies is allowing things like this to happen. It is really unfortunate.

“The bottom line is that the communities are not being carried along, so they see security agencies as separate from them when in reality they are part of them and are there to support them,” he said.