How Bida bubbled as Etsu Nupe turbaned rep, others

Bida Emirate rolled out its Nupe drums and trumpets to celebrate the recognition bestowed on four of its sons by its paramount ruler, the Etsu… 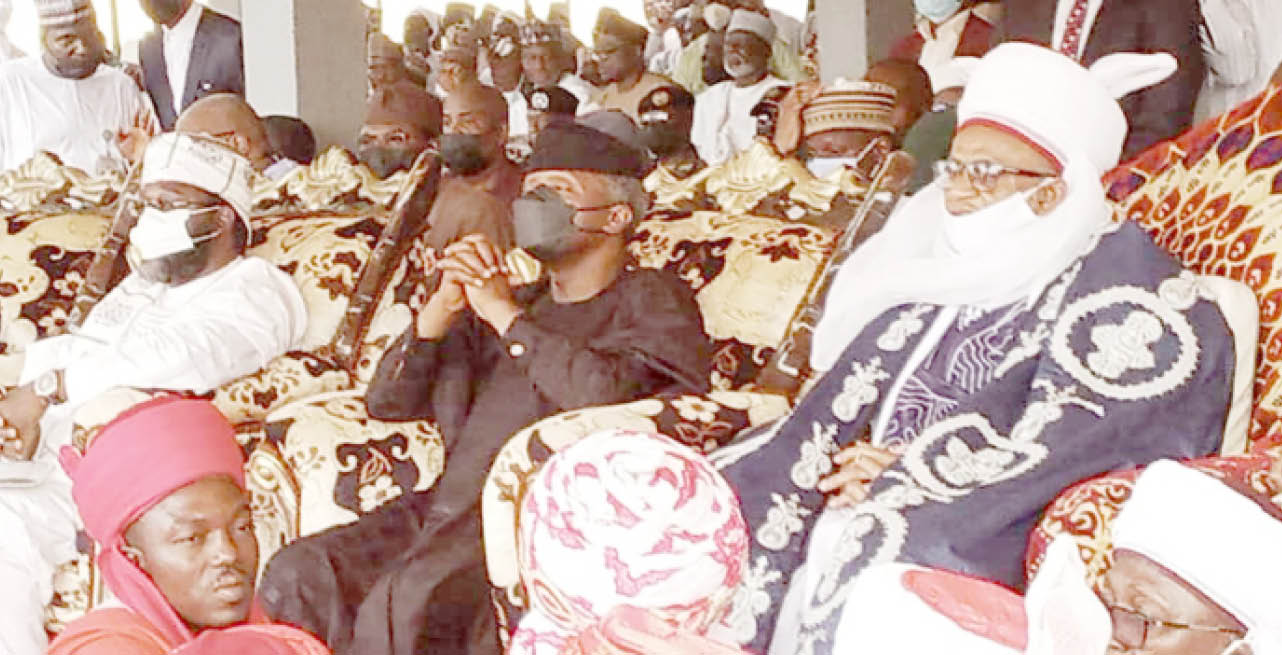 Bida Emirate rolled out its Nupe drums and trumpets to celebrate the recognition bestowed on four of its sons by its paramount ruler, the Etsu Nupe, Alhaji Yahaya Abubakar, on Saturday, December 4, 2021.

The town witnessed the influx of well wishes from all over the country who converged on the ancient town and cradle of Nupe civilisation to witness the event.

Wadata Palace, as the etsu’s palace is called, answered its name because, “wadata”, a Hausa word, means abundance, and guests really had in abundance almost everything regarding Nupe hospitality and culture.

The red carpet was rolled out to receive the Vice President, Professor Yemi Osinbajo, Governor Abubakar Sani Bello, the Speaker, House of Representatives, Femi Gbajabiamila, who was represented by Abubakar Hassan Nalaraba, and other very important dignitaries.

They all came to felicitate with the Member representing Bida/Gbako/Katcha Federal Constituency, Sa’idu Musa Abdullahi popularly known as SMA, who was turbaned as the first “Gwarzon Nupe”.

On the day, guests arrived in their numbers and security was beefed up throughout the town. Residents trooped out and lined up the major roads leading to the palace to cheer the guests.

Inside the palace premises, sounds of traditional praise singers, drummers rented the air as they showcased their talents.

As Vice President Osingajo arrived the palace, he was received briefly by the Etsu Nupe and exchanged pleasantries with the etsu’s councillors and prominent members of the traditional council and traditional title holders.

Thereafter, the etsu, vice president, governor, as well as other dignitaries, sat and watched proceedings, including the turbaning of the four persons. While they waited, various groups of Nupe traditional musicians and other groups paid homage to them.

The Etsu Nupe gave a welcome address and particularly commended the vice president for coming to Nupe land which subsequently earned him a traditional title to represent “Tapa” interests. Tapa is the name given to the Nupe by the Yoruba.

He said although the vice president had dozens of traditional titles from various parts of the country, he would confer one on him to become a member of the Nupe Traditional Council.

The Etsu Nupe said: “I was jealous when the MC announced all the chieftaincy titles you got from all parts of Nigeria. I said no, it can’t happen, before you leave this place I am going to announce officially now, you will be turbaned later.

“Having secretly talked with my service chiefs, they are all here with me. I met with them and I want to confer on you “Garkuwan Yamman Nupe”.

Garkuwan Yamman Nupe is one of the titles given to distinguished sons of the soil. And you coming from the West, you will represent all the Nuoe interests in the West Insha Allah.

“Your greeting is “Daudu”. Anytime you see a Nupe man, he will greet you “Daudu”. Honestly I felt jealous of the titles you collected all over the country.

“So, you cannot come to Nupe land and go empty headed, not empty handed. So, on behalf of my people, you are most welcome your excellency.”

On his part, the Osinbajo said, “Your highness, please accept my deep appreciation for the conferment on me of the traditional title of “Garkuwan Yamman Nupe”. Just as His Excellency, the governor has said, I have no excuse now for not spending the night anytime I come to Bida. I must make sure, that as a loyal title holder, I spend the night.

“This kingdom is steeped in the splendour of tradition, and indeed this occasion provides us a platform to appreciate the rich cultural heritage of the Nupe people; a proud and distinguished people with a unique history.

“Your highness, the fierce resistance of the Nupe people during the illustrious reign of your forebears, especially the fifth Etsu Nupe, Abubakar, between 1895 and 1901 remains the high point in the history of colonial rule in Nigeria.

“When we look around this Wadata Palace, we can see some of the vestiges of the battles, the symbols of Nupe bravery and heroism. I am glad that his royal fitness has established the annual Nupe Day celebrations, not only to commemorate the defeat of the British colonial army by a local African army, but to celebrate Nupe dynasties and to also emphasise the value and importance of rulers of a peaceful and united people, the Nupe people and their enormous contributions to the overall development of the present day Niger, Kwara and Kogi states in particular, and the nation at large.

“Many sons and daughters of Nupe land have risen to prominence in Nigeria. Both the past, both pre- independence and post-independence making significant contributions to national development. The list is endless but includes the late Aliyu Makaman Bida; the Deputy Premier and Minister of Finance who was described by Sir Ahmadu Bello as one who would go down in posterity as one of the distinguished sons of Bida and Nigeria.

Today, Nupe land is very fortunate to have one of its sons who after an illustrious career in the Nigerian military, rose to the rank of general before he answered the call of service to his people. To take the seats of his forefathers as the 13th Etsu Nupe. His Royal Highness, Alhaji Yahaya Abubakar (CFR), our host today.

“They have all brought competence, commitment and character to the positions of responsibility entrusted to them. And this is evident from what we know and what has been said about them.

“I will like to congratulate these worthy sons and daughters of this kingdom that have been turbaned today. Starting with my dear friend and brother, Honourable Sa’idu Musa Abdul (SMA…Your turbaning is a fresh call to service to this community and by such means to the nation.”

The vice president was later presented with a white horse by the Etsu Nupe.

Speaking earlier, the first Gwarzon Nupe, Sa’idu Musa Abdullahi (SMA), thanked the etsu for finding him and others worthy to confer them with the traditional titles.

He said, “This is one of the few moments where you look for the right words to show your appreciation for honour done to you and you realise that the words are not just coming.

“The first and most important thing about life is for us to appreciate God for giving us this gift of life.

“It affirms my belief that Nigeria is a country with vast opportunities. You only need to be at the right place at the right time.

“I am highly overwhelmed because of the encomiums. In fact, we should improve and double our effort in terms of our commitment to represent our people.”