Mohammed Kabiru Magayaki was only five years and eight months old when his tragic demise made newspaper headlines and captured the nation’s attention. Daily Trust… 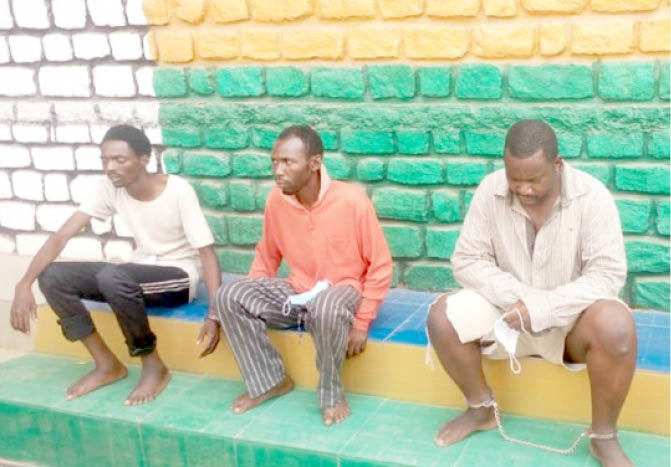 Paraded by the police from left, Sani Galadima, Umar Mainasara and Mohammed Nazifi

Mohammed Kabiru Magayaki was only five years and eight months old when his tragic demise made newspaper headlines and captured the nation’s attention. Daily Trust takes a look at the sitution.

The almost six-year-old; first child of Amina Kabiru Magayaki was said to be jovial, full of life and one who loved to help others. It was these qualities that Mohammed’s next-door neighbour, Mohammed Nazifi, allegedly used against him when he sent him on an errand into the waiting arms of a predator.

The Kaduna State Police command on Monday said at the time Nazifi sent Mohammed on an errand, he had orchestrated a plan with one Sani Adamu Galadima, who also frequented the neighbourhood to abduct the boy in order to force his father to pay ransom.

And so, on the evening of Saturday April 24, 2021, Mohammed’s mother, Amina, said she had prepared potatoes for him to eat and after that, he left her side of the apartment to where she thought was either his father’s section or to join his friends next door.

While Amina thought Mohammed was with his father at 7pm after the break of the Ramadan fast, the boy’s father, Alhaji Kabiru Magayaki, had assumed Mohammed was also with his mother. It was however after 8pm, soon after Taraweeh (special) prayers that Amina sent for Mohammed and the family was thrown into a frantic mood.

During the drizzling night, Alhaji Kabiru Magayaki, Mohammed’s father, said they went from house to house and hours later decided to call off the search. By the time the police got involved the next day, Mohammed had been moved from Kaduna to Zaria and eventually Kano where his abductors placed him in the hands of a woman identified as Amina. But three days later and few hours after Mohammed’s father paid N1 million for his son’s freedom, Sani Galadima took the boy into a drainage system. Said to be working on the instructions of Nazifi, he solicited the help of one Umar Mainasara – a water vendor, to murder Mohammed through suffocation.

The murder and eventual arrest of the four suspects in connection with the crime had shook the community of Badarawa Shagari junction in Kaduna North Local Government Area. Residents expressed shock as to how a neighbour could betray the trust of another neighbour, and Zainab Ibrahim who lives in the neighbourhood said the crime had angered many residents.

“Our pain is that someone so close to the family could do this. What we want now is for the law to take its course, they deserve to be killed for taking the life of that child,” she said.

Mohammed’s mother, Amina Kabiru Magayaki, said she was dumbfounded when she first learnt of the involvement of Nazifi and Sani in her son’s disappearance and eventual murder, saying they not only shared a fence with Nazifi’s parents but that Nazifi sometimes eats from their pot.

“I know Sani, I also know Nazifi. In fact, Nazifi’s parents share a fence with us, they lived in the Boy’s Quarters (BQ) of the house beside ours; their family is called Sarkin Alhazai. We thought we were all one and never expected them to do this to us,” she told Daily Trust Saturday.

It was gathered that a day after her son went missing, Amina and other family members had been besieged by sympathizers who thronged into the Magayaki residence while others made efforts to help search for her boy. She explained that one of those who came to console and pray with her for Allah to reveal the whereabouts of Mohammed was Nazifi’s mom.

“She held my hands and prayed to Allah to reveal Mohammed to us, but since the rumour started that her son had a hand in the abduction, I have not seen her,” she said.

Amina however said Nazifi’s father had visited their home where he distanced himself and the family from Nazifi’s action and assured them that his son must face the law if found guilty of the crime.

“I felt happy that he made that remark because that is justice and it showed that the parents had no hand in what happened,” she said. Despite his repudiation of his son, our correspondents learnt that it did not buy the family of Sarkin Alhazai sympathy as they had been forced to relocate to an unknown location.

Though it was Nazifi who allegedly masterminded the abduction of Mohammed, it was Sani Adamu Galadima, a discharged army personnel and father of two, that murdered Mohammed with the help of Umar Sani, a former Lance Corporal.

Daily Trust Saturday gathered that Sani was discharged from the army in 2012 when he attempted to shoot his boss in Ibadan. He is said to have remained jobless since then, scavenging from family and friends to care for his family.

In 2019, luck ran out on him when he found himself at the wrong place. Thugs popularly known as yan Sara-suka attacked and severed his right hand. At that time, Abdulharahman Kabiru Magayaki, Mohammed’s older brother, said their father, Alhaji Kabiru Magayaki, was one of those who assisted Sani in settling his hospital bills.

Even though his wife and two kids are said to live around Malali, his family home is located at Badarawa which explains why he frequented the area. However, since the incident, his family members have abandoned both homes at Badarawa and Malali for fear of a backlash from angry youths.

Sani’s brother has, however, distanced the family from his brother’s action, calling on the government to take action on his brother and ensure justice prevails. His older brother, Muhammadu Galadima, said the family had no hand in Sani’s action and were not aware of what he did until it came to the public domain. He said as a family, it was their wish and prayer that authorities concerned take action as quickly as possible on his brother to serve as deterrent to others.

For his parents and siblings, Mohammad may have been less than six-years-old when they lost him, but their love for him will remain in their hearts. Recalling some of her memorable moments with Mohammed, his mother said: “He loved to help others, his father recently told me that when they went to pray in the Mosque, Mohammed will finish before him and then wait outside to arrange his father’s shoe because he didn’t want his dad to have to bend down and do it himself, it was something his father loved and appreciated.