Road users and vehicle owners in the Federal Capital Territory (FCT), Abuja, have commended the ongoing solar streetlight project at various strategic places. It was… 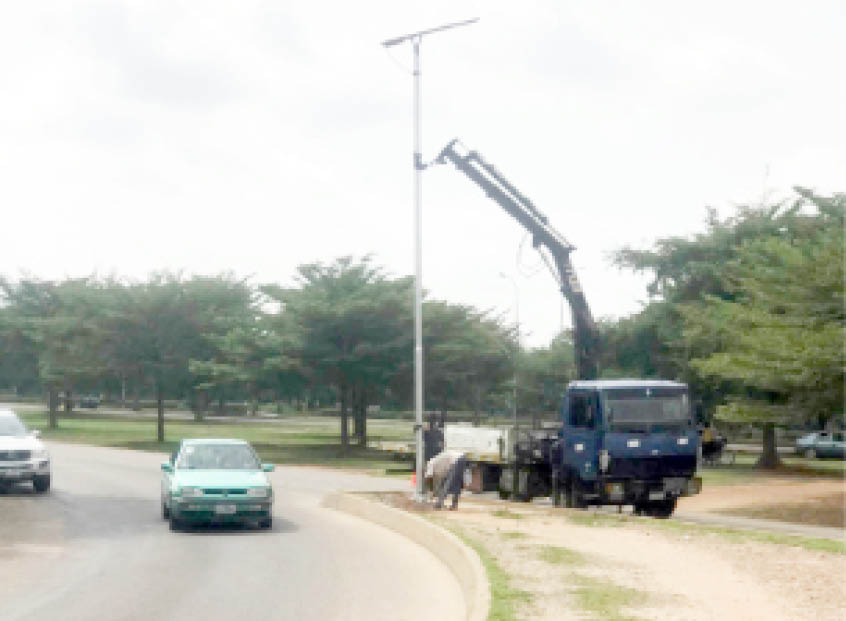 Road users and vehicle owners in the Federal Capital Territory (FCT), Abuja, have commended the ongoing solar streetlight project at various strategic places. It was observed that many areas where there were no streetlights and some places where they were not functioning properly have been lit at night. Residents who spoke with Daily Trust Saturday also said the streetlights had helped in reducing the activities of criminals anywhere they were installed.

The project many say, is aimed at improving security in the city and its environs in many major roads.

Apart from tackling the problem of insecurity in the territory, the project is also expected to curb the rate of road accidents within the city.

The project is being carried out by the Department of Facility Management and Maintenance of the Federal Capital Territory Development Authority (FCTA).

Daily Trust Saturday went to many parts of the city and observed that the project was ongoing on many streets of the territory, such as the axis from the National Health Insurance Scheme (NHIS) to Setraco roundabout, along the Shehu Yar’adua expressway, to Kado roundabout, as well as Kado Estate, which connects the Murtala Mohammed expressway.

Many motorists who spoke to Daily Trust Saturday commended the FCTA over the project, noting that it would improve security in the country’s capital territory.

Bello Abdulazeez, a motorist who plies Lugbe road to his workplace at Jabi said, “Half of the streetlights in Abuja are not working, but the good thing is that the authorities seem to have woken up. They are replacing malfunctioning streetlights with solar-powered devices.

“The project can bring about sanity by discouraging some bad road users. For example, Keke riders take advantage of lack of streetlights to drive recklessly and misbehave on the road. But now that there are streetlights, such misbehaviour will be discouraged.’’

He appealed to the FCTA to continue the project until all important roads in the city are powered, noting that the Abuja Electricity Distribution Company (AEDC) cannot be relied on due to constant power outage.

He added, “Security wise, this is a laudable project. And solar-powered streetlights are better because there is no stable electricity from the AEDC. With this distribution company it could take four days without electricity on the streets and everywhere would be dark. And even when light is supplied there, sometimes it lasts for only three hours throughout the night.”

A resident of Kado Estate who did not want his name mentioned, said that because of lack of streetlights he was recently robbed in the evening around Sani Zangon Daura Estate, which is adjacent Jabi Lake. He said he was attacked by the roadside on the Shehu Yar’adua Expressway by three men as he walked along.

“One fateful Wednesday, after I closed from work just few minutes past 6pm, as I was walking home, a man grabbed my neck from behind. As I was struggling with him, before one could say Jack Robinson, two others came and pounced on me, pushing me to the ground. They dispossessed me of my belongings and vanished into the nearby bush,’’ he narrated.

He believes the installation of functional streetlights can significantly discourage criminals from operating without fear.

He said, “Streetlights instill fear in criminals who take advantage of the dark hours and places to operate. Before streetlights were installed in Kado Estate, some miscreants used to break the windscreens of vehicles parked by the roadside, just for their owners to either buy something from nearby stores or see people in houses close to the street. Such incidents happened on a daily basis, but I can tell you that they have reduced drastically because of the solar streetlights there.’’

He also called on the FCTA to provide adequate security personnel at various strategic places, especially those seen as dangerous spots.

A security guard at Kado, who gave his name as Hamisu, told Daily Trust Saturday that the installation of streetlights had considerably aided their work in the area as petty criminal activities had reduced at night.

He said, “Apart from beautifying the area, the lights scare away miscreants. They are usually emboldened to perpetrate their wickedness when the places are obscure and dark.’’

Many motorists in the territory who spoke with our reporter also commended the FCTA for illuminating the streets at night, a gesture they agreed had scared away criminals and reduced the rate of accidents as there is now good visibility

Many residents who spoke with Daily Trust Saturday also called on the authorities to extend the project to satellite towns, such as Kubwa, Nyanya etc, which still have a lot of dark streets, raising security concerns.

A resident of Kubwa, Tunde Babatunde, said he was scared when he returned from Cross River State last week as he drove home from the airport by 11pm and the roads were dark.

“I remember that I hit a pothole before Byazhin junction. I thought it was a big stone, the type that robbers put on road to stop vehicles and operate. But I said I would not stop, no matter what happened,” he said.

Another resident, Yusuf Quadri, a trader at the Kubwa Village market, also expressed concern over his safety when he closes at night and had to walk home in darkness.

He said, “At times I close late; and the place used to be dark. The fear of attack by hoodlums has forced me to stop closing late at night. I have heard several people complain that their phones had been snatched in some dark spots. It is very bad. The authorities involved should do something about it urgently.”

It was also observed that the AYA-Nyanya road, Kasim Ibrahim Way, Sani Abacha Way and many streets in Wuse and other parts of the city centre, as well as Garki, are still dark at night.

A motorist, Emmanuel Nwaorgunn, who plies the AYA-Nyanya road, said hoodlums usually lurk around to snatch phones and handbags from passengers, especially when there is traffic jam.

“There is no security on this road because the streetlights are not working and hoodlums take advantage to hide in the darkness to oppress residents who are held up in the traffic jam,” he said.

Also, Zakari Taheer Imam, a resident in Dakwa, near Dei Dei in the Abuja Municipal Area Council (AMAC), said it was necessary to extend the streetlight project to his area.

“There are no streetlights here; and as a result, there is insecurity, especially at night. One cannot walk freely because of the fear of being ambushed by thugs, who dispossess people of their valuables,” he said, adding that streetlights do not only proffer solutions to insecurity but also beautify the area at night.