How 62 airlines went moribund since 1960

Dozens of airlines that operated both scheduled and non-scheduled flight services have gone moribund since 1960 when Nigeria attained independence from the British colonialists, Daily… 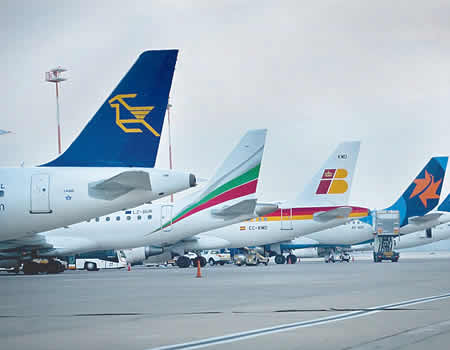 Dozens of airlines that operated both scheduled and non-scheduled flight services have gone moribund since 1960 when Nigeria attained independence from the British colonialists, Daily Trust checks have revealed.

As the country marks its 62nd anniversary, our findings show that no fewer than 62 airlines at different times in Nigeria’s aviation history have become extinct.

Those familiar with activities in the aviation sector attributed the attrition rate to many factors, including an unfriendly business environment and paucity of funds.

While this is happening at a time the federal government plans to float a new national carrier, experts have cautioned that the new airline might not be insulated from the current challenges, which have weighed down existing airlines and even prevented new ones from starting operations.

Over the years, many airlines in Nigeria have disappeared from the airspace amidst what operators call a “stifling operating environment.”

Chairman of the defunct Trans – Sahara Airline, Alhaji Salihu Yinusa had in the past told Daily Trust that government has no policy of encouraging indigenous airlines. According to him, while airliners buy aircraft and spare parts in dollars, they price their tickets in naira.

He said, “We buy the aircraft and spare parts with foreign currency, dollars. Our people actually have developed a likeness for very cheap tickets and almost free tickets.

“The second aspect of it is that here in Nigeria, we fly only for maybe from 7: 00 am to 8: 00 pm and aircraft have hours that need to be utilised. In foreign countries, the aircraft flies 24 hours. It only stops when they have to do a service or when there is maintenance on it but here you only fly for a few hours and you park it. So the time you are supposed to be flying, the aircraft is parked. That actually contributes to the failure of us getting revenue to pay for our needs.”

Daily Trust reports that the cost of aviation fuel (Jet A1), which constitutes 40 per cent of the airline’s operating costs has virtually quadrupled in the last year with a litre being sold for N800 per litre. Also sourcing foreign exchange for airlines has become a thorny issue as the operators said they go to the parallel market to buy dollars, which cost N735 to one dollar as of Thursday, October 6, 2022.

There have been complaints over Nigeria’s inability to maintain a national carrier amid equal reservations over the failure of individuals or groups to maintain commercial fleets over time.

Nigeria is said to be a huge market and could make a fortune from a vibrant aviation sector because of its population and business opportunities.

More so despite the current high cost of tickets with a one-way flight on Lagos-Abuja costing as much as N150, 000, the demand for travel on the domestic routes is still high because of insecurity and fear of being kidnapped while travelling on Nigerian roads.

But many cities are still left untouched by airlines in their domestic network and stakeholders say more airlines would bridge the existing gap in domestic flights.

Despite the shutdown of the industry in 2020 occasioned by COVID-19, the industry recovered rapidly on account of the lucrative market and the high demand for travel as data from the Federal Airports Authority of Nigeria (FAAN) indicated that the domestic passenger traffic rose by a significant 43.3 per cent to 9.07 million in 2021 from 13.01 million in 2020, while the international passenger traffic saw a 44.4 per cent increase to 2.32 million from 1.6 million in the previous year.

Both Aero and Dana recently suspended operations and they are reportedly putting finishing touches to return to operation.

Experts who spoke to Daily Trust said the available airlines are not enough for the Nigerian market, pointing out that there is the need to have more in order to further break the monopoly, increase access and reduce the cost of flight tickets.

They, however, said this could only be possible when existential problems like taxes, cost of maintenance, access to aviation fuel and other consumables are addressed.

What needs to be done—Operators

Operators have blamed the operating environment for the high mortality rate of airlines in Nigeria even as others blamed the government’s policies, which are not encouraging foreign investors to partner with domestic airlines.

Vice-President of the Airline Operators of Nigeria (AON) and Chairman of Air Peace, Mr Allen Onyema recently cried out over the high cost of operation following the skyrocketing cost of Jet A1 and the increase in handling charges, among others.

“In the year 2000, the lowest fare in Nigeria was N2, 200, which was equivalent to $100 then. Now, 22 years down the line, Nigerian airlines, we were charging less than $30, $40. Do you need to look for reasons why airlines are closing shops in this country? Over 50 airlines have closed down in this country. Has anybody bothered to find out why?”

He said some of the charges being collected from airlines should be expunged from the system.

He specifically said that the five per cent Ticket Sales Charge/Cargo Sales Charge (TSC/CSC) remitted to the NCAA was enough to fund all the aviation agencies.

“Government also needs to find a way of funding the industry, while every factor affecting its growth should be checked. Most of our moribund airlines went under as a result of a paucity of funds. We need to know that the same environment leading to the death of those airlines persists, if not getting worse,” he said.

He further canvassed for single-digit interest rates spanning over 25 years for domestic operators, saying the global best practice for successful national or flag carriers is 1.5 to 3 per cent interest rates and at a maximum of 25 years.

He stated that in Nigeria, interest rates are between 22 to 35 per cent and in just five years, wondering how the airlines could operate profitably under such a condition.

He also appealed to the government to make forex easy and available to aviation businesses, warning that without this, airlines and other businesses in the sector would continue to collapse.

Also speaking, a member of the Aviation Roundtable, Mr Olumide Ohunayo said many airlines had gone under due to lack of corporate governance.

He stressed the need to remove owner-manager syndrome from the management of airlines and entrench an effective corporate governance system by having in place a board of directors to manage an airline.

He said many airlines reached the zenith of their operations only to find it difficult to manage their success.

He said, “Arik Air started and was doing well, buying big planes and opening up new routes and it fell. Then came Virgin Nigeria with the technical partnership from Virgin Atlantic, we expected that the partnership was made in heaven and that Nigeria would blossom with a flag carrier. That also failed.

“If what we are looking at is about 62 years, we cannot say that the environment has been unfavourable in the last 62 years. We cannot also say that safety has been very bad in the last 62 years. If safety was a problem, we would not have been able to retain our Category One status; we retained and sustained it when neighbouring countries were fighting to attain it.

“I think what is fundamentally wrong is the power to manage that success. What’s synonymous here is that we lack functional boards of directors for our airlines. I think we should look at the issue of corporate governance.