Hospitality business goes to sleep in Ikotun after TB Joshua 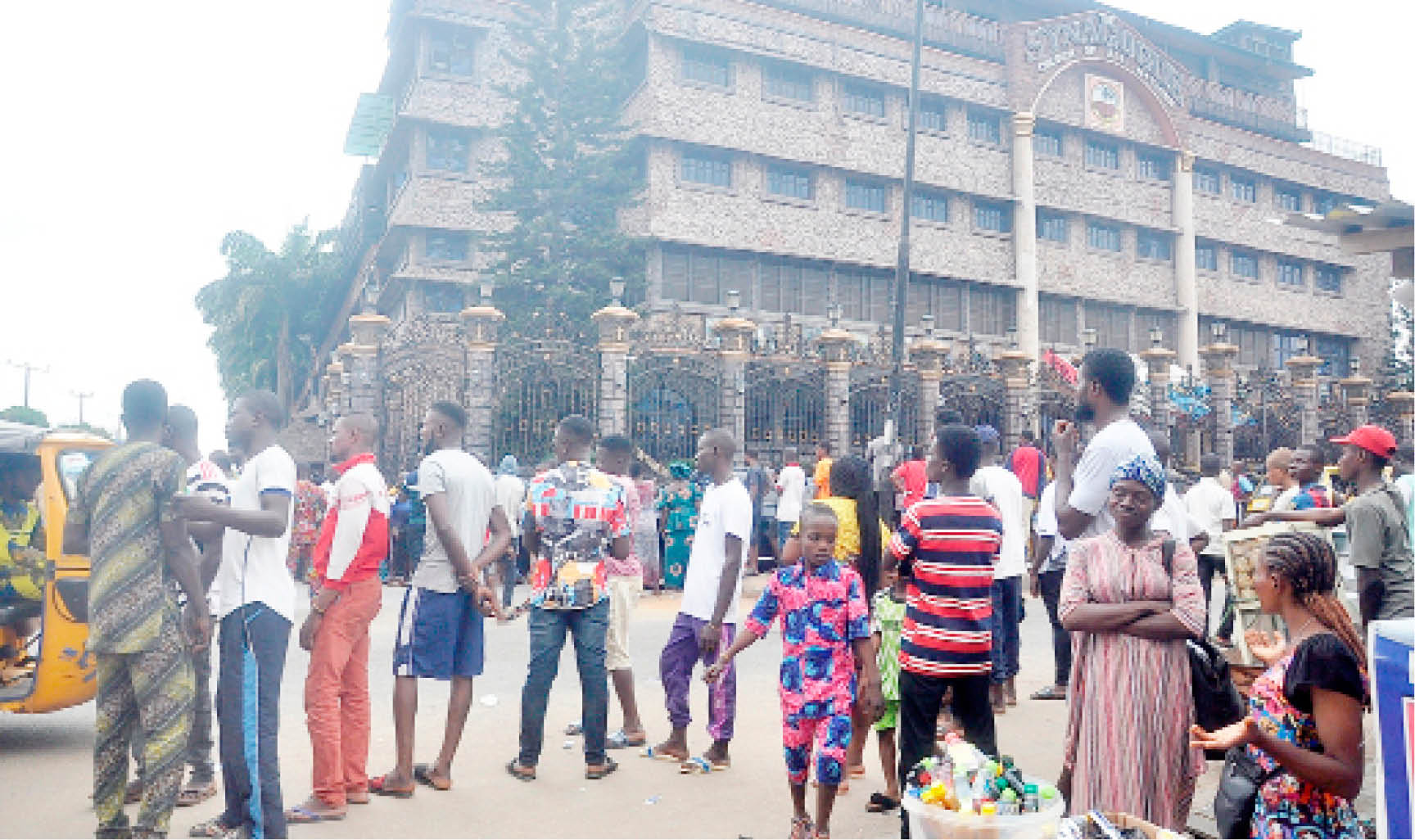 Members of Synagogue Church of All Nations outside the Church premises mourning the death of Prophet TB Joshua, at Ikotun in Lagos on June 6, 2021

The mood around the Synagogue Church of All Nations (SCOAN) in the Ikotun area of Lagos State has been that of unease since the death of the founder of the church and televangelist, Prophet Temitope Balogun Joshua, popularly known as TB Joshua.

The news of the death of the charismatic pastor and philanthropist spread like wildfire, leaving many in shock.

Prophet Joshua, who was born on June 12, 1963, bade the world goodbye shortly after presiding over a programme in his church on June 5, 2021, barely one week to his 58th birthday.

His wife, Mrs Evelyn Joshua, said her husband’s demise didn’t come to her as a surprise as it was an act of God.

Many people, including church members, neighbours and the host community were stunned by the death of the Arigidi-Akoko, Ondo State-born televangelist, who was not only famous for his healing ministry but also his large heart, humility and generosity.

Activities of the church, which attracted visitors and members from within and outside the country, had overtime spurred socio-economic activities, particularly religious tourism around the Igando/Ikotun Local Council Development Area (LCDA) of the state.

In addition to this, residents of this area, particularly the downtrodden, benefitted from the generosity of the late prophet, whose goal was to touch people’s lives with the gospel and material things.

Our correspondent, who visited Ikotun area on Thursday, learnt that there is anxiety over what the people described as fear of setback for business operators in the community.

Business owners are already full of anticipation over the full reopening of the church, which has been closed since the COVID-19 lockdown.

Around the mega-church are numerous businesses, including hotels, guest houses, restaurants and eateries. Daily Trust Saturday learnt that they have been enjoying good sales and patronage from visitors from other states of the country and tourists outside the country who visit the church.

The regular stream of visitors led to a boom in the hospitality and other small businesses in the area, with the youth who act as agents also making brisk businesses.

These business operators are, therefore, apprehensive of the consequences of the ‘people’s prophet’s death on their businesses. Though they said business patronage generally dropped since the COVID-19 pandemic crept into the country, which caused the church to stop holding physical services and went virtual, the death of the founder of the church might further aggravate the situation.

Since the death of the televangelist, encomiums from different quarters have continued to pour in, with many describing him as a giant in the tourism industry. They said a big vacuum had been created, which may be difficult to fill.

It was gathered that among those who will feel the impact of TB Joshua’s death are taxi operators who make brisk business when the church is fully opened, particularly during major events, as well as operators of bureau de change who helped with money exchange, as well as widows, orphans and other community members who benefitted from his generosity.

The activities of the church indeed created an economy around the little known community of Ikotun.

An accommodation agent in the area, who gave his name as Austin Joseph, said he got over N30,000 weekly as gift and appreciation from visitors who came in search of accommodation, aside from his monthly salary.

He said, “For now, nothing is happening. We are just hoping that business would boom during the prophet’s burial, scheduled from July 5 to 9, 2021 when visitors from far and near are expected to throng the area to seek accommodation for the week-long burial programme.

“His death is very painful. Before now, due to activities of the church, which included miracles and water service, among others, many people came to the area to spend weeks and months to make their appointment with the prophet.

“In fact, there were times that after almost all the hotels nearby are filled up, some visitors knocked on doors to beg people to allow them just pass the night. We will miss all of that, but we have submitted to the will of God. We believe he only died in the flesh but alive in the spirit.”

According to him, the number of people who visit the church now is very low compared to the crowd that thronged there before the COVID-19 pandemic, which he said affected virtually all businesses within the area.

A source close to the deceased’s family said Prophet Joshua’s ministry impacted many lives positively. He disclosed that many of the big hotels in the community sprang up because of the presence of the church. However, he lamented that patronage to those businesses had been low since the church stopped holding physical service due to coronavirus protocols.

In fact, oblivious of the prophet’s impending death, it was

observed that more hotels are springing up while some are expanding, in anticipation of a business boom when the church reopens.

Now, the fear of what would happen after the burial of the founder of the church has continued to linger in the minds of business operators in the area as they may no longer enjoy huge patronage from visitors and worshippers as before.

An official of one of the big hotels in the synagogue community, in a chat with our correspondent, said the huge success the hotel enjoyed in the last three years had been largely due to the influence of the church.

“Our first set of customers were visitors to the synagogue from Nigeria and abroad. The church gave our hotel exposure as a lot of foreigners patronised us. Many times we had all the rooms booked, especially at weekends during water service.

“Although we have many other customers who are not church members or visitors to the church, the good thing about customers from the church is that when they come, they spend up to a week, month or even more.

“The prophet’s death is a big setback on the economy of Ikotun because there are so many things enjoyed in the community, including building of big houses, hotels, constant power supply, among others, which are all here because of the synagogue. TB Joshua was like a saviour to our economy,” our source, who spoke on the ground of anonymity, said.

In another hotel close to the church, a staff confirmed that they got many customers from the church and that the closure of the church due to the COVID-19 affected their business. He, however, disclosed that apart from members and visitors of the church who formed a large part of their customers, the hotel also got good patronage from yahoo boys.

Mrs Grace Ozeum, a food seller opposite the Synagogue Church, said she was encouraged by people to start the business there as there was a massive market in the area due to the crowd of visitors. She said her expectation was, however, dashed because she started the business a few weeks before the COVID-19 lockdown. She said that since then, sales had been very low.

“I kept pushing despite the poor sales, believing that when the church opened, business would boom, only for me to hear the death of the prophet. I am really pained. I am a beneficiary of his generosity,” she said.

Also, a groundnut seller, Hadijat Shehu from Ikotun Egbe said, “I have never collected anything from the prophet, but I feel pained by his death because I have heard a lot about his generosity to the poor. For me, whoever remembers to feed the less-privileged is rendering service to God.” She said Prophet Joshua would be greatly missed by the people of Ikotun, especially during the December period when he distributed food items to the needy.

Some of the hotels in the area are Victoria Continental Hotel, Hardrock Hotel, Prince Bella Hotels and Travels, Hymax Hotel and Suites, De One Lodge, Sweet Saviour Hotel and Suites, as well as many restaurants, supermarkets/stores.

The Director-General of the National Council for Arts and Culture (NCAC), Otunba Segun Runsewe, had described Joshua as a committed tourism promoter with a huge contribution to Nigeria gross domestic product.

According to him, the Synagogue Church of All Nations has the largest network of religious tourism in Nigeria that cuts across 15 countries. He said whenever the church was holding major events, over 60 private jets would be parked at the Lagos Airport, while hotels in Ikotun, Ikeja axis were always fully booked.

“The number of foreigners the church attracts to Nigeria each year is monumental and a major boost to the country’s tourism,” he said.

Also, a former National Secretary of the Labour Party, Dr Kayode Ajulo, said TB Joshua’s death presented an irreparable loss to Nigeria, adding that the cleric attracted the largest number of tourists to the country.

The human rights lawyer described the late Joshua as a compassionate and gold-hearted religious leader. Nigeria, he said, “has lost a religious leader whose numerous activities have positively influenced the nation, the downtrodden and his followers.”

Also, the coordinator of the Federation of Tourism Association of Nigeria (FTAN), Lagos State chapter, Mr Gbenga Sunmonu, described the death of Prophet Joshua as a monumental loss to the tourism and hospitality industry; saying the inflow of tourists would decline because the deceased’s personality had attracted a lot of people.

Sympathisers have continued to visit the wife and family of the late prophet, who would be laid to rest on July 9, 2021.