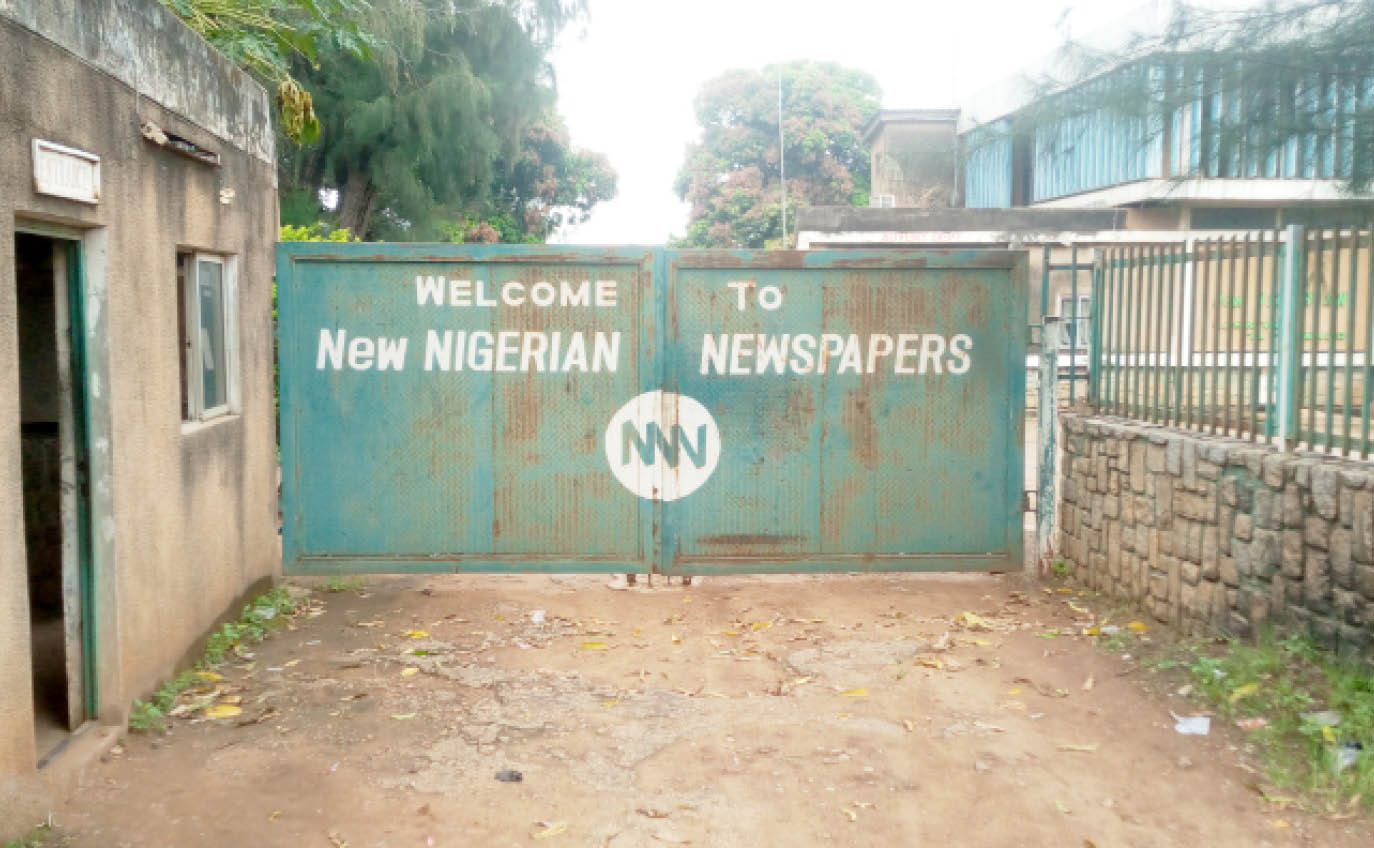 New Nigerian Newspapers Limited (NNN), publishers of New Nigerian newspapers and Gaskiya Ta fi Kwabo was established by the late Premier of Northern Nigeria, Sir Ahmadu Bello, the Sardauna of Sokoto in 1966 and became one of the respected newspapers organisations in the country.

Because of its mouth-watering welfare package considered among the best in the past, many applicants were said to have rejected employment letters from the Central Bank of Nigeria (CBN) and Nigerian National Petroleum Corporation (NNPC) to work with New Nigerian Newpapers.

Most of the best hands in the Nigerian media industry are said to have passed through the New Nigerian Newspaper amongst them veterans like the late Adamu Chiroma, Malam Maman Daura among others. Unfortunately, decades later, the company has gone comatose and now for seven years, has stopped production. Staff who still linger within the New Nigerian Newspapers headquarters in Kaduna say the company is about to completely shut down due to years of neglect by its owners, the 19 Northern State Governors.

It was in the year 2006 that the Northern States Governors took over the company from the Federal Government after a botched attempt to sell it to a private individual. The newspaper company which has many assets scattered across the country, comprising of staff quarters and some uncompleted storey buildings in Kaduna as well as assets in Lagos State has been unable to sell these assets to pay off its workers.

Even with the handover of the company to the northern governors, some of the workers say the company has further deteriorated as the governors have failed to revive it as earlier promised. “The governors couldn’t find a collective stand on how to run the newspaper company. They abandoned it, making the condition of the staff worse than it was under the federal government,” said a staff of the company.

When Daily Trust visited the headquarters of the company along Ahmadu Bello Way in Kaduna, it was observed that the premises could best be described as a ghost town, overgrown with grasses. The library and production section which comprises of the printing section were all deserted. Our correspondent observed that cobwebs have taken over the office walls and the printing machines; an indication that they had been out of use for many years. There was no light in some of the offices due to lack of electricity.

Why we still work without salaries – Staff

Even though the then foremost newspaper is no longer in circulation, some staff of the company have remained adamant that they will continue to work, filing reports for the online edition as they await their entitlements. Speaking on the condition of anonymity, some of the staff told Daily Trust that having worked for several years with the New Nigeria Newspapers, they have been unable to secure new jobs due to age.

“We are only waiting for the Northern States Governors to fulfil their promises and pay us our entitlements,” one of aged staff said.

But some staff appear pessimistic due to years of unfulfilled promises. “We have heard such promises in the past, we are yet to see them fulfil it. Everyday, we keep hoping they will pay us but when? How long shall we continue to wait? They keep making promises and it’s been seven years,” one of them said.

Another staff said even though they continue to report for work daily, most of the staff were in need of financial assistance and wondered why the northern governors have been unable to pull their resources together to pay off the workers once and for all.

“If the northern governors really want to pay us our entitlement, they can contribute among themselves and settle us since they know that the company has assets. After selling the assets, they can get back their money from the sale,” another said.

Committee set up to dispose assets

After waiting for years, there seemed to be a light at the end of the tunnel this time around as the governors are said to be gearing up to pay workers entitlements as soon as the committee chaired by the Secretary to the Kaduna State Government, Lawal Balarabe, completes its mandate and sells off the defunct company’s remaining assets.

With bidding process for the assets said to have gone far, Chairman of NNN joint Workers ‎Union, Friday Sule Idoko, said the staff have endured for years without collecting full salary, adding that the new development was welcoming.

Idoko said sometimes staff are given 10 or 15 percent of their monthly salary which lately has ceased. “Our staff are finding it very difficult, most of us are living from hand to mouth coupled with transportation hardship, rise in foodstuff and other life challenges,” he said.

The chairman said the northern governors have stopped providing funds for the running of the company, saying former Sokoto State Governor, Senator Aliyu Wamakko, was the last governor to donate money to the company during his time in office.

“All our hope is on this asset bidding process that is ongoing. We are hoping the northern governors will stick to the promise made since they have started selling the properties. The process is ongoing under the Kaduna State SSG and we are keeping faith that they will fulfil their promise this time around,” he said.

The Acting Managing Director of the company, Malam Yusuf Musa, when contacted said the Northern Governors Forum through the Assets Selling Committee have been working tirelessly to ensure that the workers get their entitlements as soon as the biding process is complete.

Malam Yusuf said: “As we speak, some people have started making payments for the properties. The money generated from the sales will be used to pay the entitlements of serving and retired workers as well as revive the company.”

Asked on the failure to pay workers salary, the Acting MD said: “As you know, the issue of lack of regular payment of salary in NNN has been on for a long time, anybody that has worked here knows we have been battling this issue for a long time.”

“Now that we are not producing, you should expect the salary issue to persist because we don’t have any source of funding except from rents receive from the few houses rented out and rents are paid annually; and even at that, it is not enough to pay the workers.”

He said part of the rent is used to pay some stipends to the workers pending when the properties would be sold and their full entitlements paid.