Calm on Tuesday returned to the 10 troubled grant-aided schools in Ilorin after days of controversy and protest over the use of hijab. Students and… 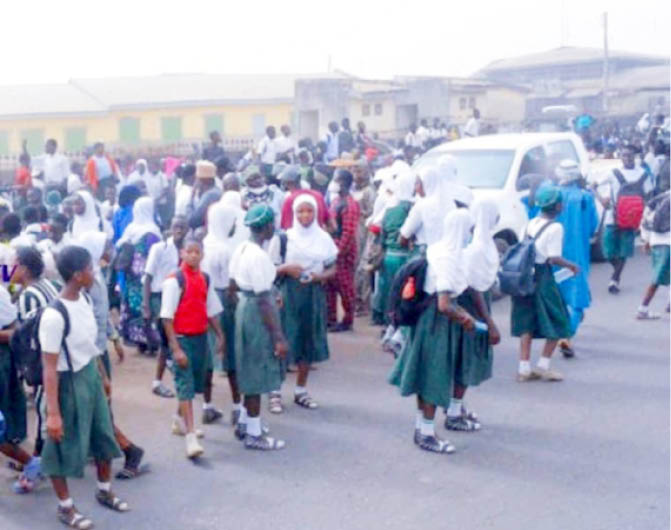 Calm on Tuesday returned to the 10 troubled grant-aided schools in Ilorin after days of controversy and protest over the use of hijab.

Students and teachers returned to classrooms. A visit by Daily Trust to most of the schools reveals that normal academic activities ongoing, and Muslim students were seen in hijab.

Students and teachers resumed under strict security surveillance to forestall any possible breakdown of law and order.

But the situation was different at Cherubim and Seraphim College at Sabo Oke, Ilorin as the gates remained under lock until around 1.25pm. No students was in sight.

It was gathered that the church leaders have agreed with the state government to open the gates to enable the students and teachers resume for work but the youths sharply disagreed thereby holding everyone hostage.

The angry youths numbering about 20 inside the school premises had allegedly connected electricity terminals to the gates.

They however voluntarily opened the gates in the afternoon after a lot of persuasion from the elders.

According to a press statement by CPS, Rafiu Ajakaye, the governor commended leaders of various religious bodies for their understanding and leadership over the last few days as the administration gets the children back to school following the hijaab decision.

The statement reads in part: “The administration appreciates the maturity and forthrightness on both sides. The government is immensely grateful that every side has continued to restrain their followers, and especially credits the religious leaders on both sides and the security agencies for the gains already recorded.

“To this effect, the government condemns in no unmistakeable terms the attempts by some fifth columnists to foment trouble in parts of the metropolis. The government will never condone this reckless behaviour and the security agencies have their instructions to deal ruthlessly with anyone who attacks fellow citizens or makes any attempts on sacred places or properties under whatever disguise. The attempt is devilish and was clearly meant to undermine the progress so far made to build peace and harmony.

“Parents are urged to call their children to order immediately. Anyone found fomenting trouble will have themselves to blame.

“The ongoing dialogue with various stakeholders will continue unhindered and the government urges leaders on all sides to continue to play their roles as statesmen without allowing any fifth columnists to provoke them or derail the peace efforts.”

Meanwhile, the Kwara State Police Command on Tuesday in Ilorin denied reports making the rounds that some churches, shop and businesses were razed by some protesters in Ilorin over the protracted hijab controversy in the state.

Some national dailies (not Daily Trust) had reported that some churches were torched over the incident on Monday.

But in a statement signed by the Police Public Relations Officer (PPRO), Okasanmi Ajayi (SP), the command denied the report adding that the protests were restricted to the affected schools.

He said: ”The command wishes to debunk the story in its entirety, no single church was burnt, no shop was looted neither was any business facility closed down as a result of the hijab milieu.

“Recall that the state government shot 10 Christian grant-aided schools over their refusal to allow hijab adorning female students entrance into the schools after a court judgement to that effect.

“The announcement of the opening of the shot schools heralded the protests by the church proprietors who insisted that no female students with hijab would be allowed entry, and the attendant insistence by the Muslims that the female students must be allowed to enter the schools in hijab.

“However, all through this, the command has deployed adequate Police men and other security agencies in all the schools/churches, the protests which were restricted to the schools have been peaceful all these while.

“Efforts by hoodlums to hijack the process was vehemently resisted by the police. The professional handling of the protests has been commended by all parties involved including the government.

“The commissioner of Police, Kwara State Police Command, CP Mohammed Lawal Bagega psc, wishes to advise our friends in the press to continue with their support to the Command as usual but must continue to verify their stories before going public.”

The PRO quoted his boss as saying that “what the state needs now is a joint effort to sustain the peace and harmony Kwara State is known with.

“The command is also assuring members of the public of her readiness to protect all law abiding citizens while criminals will be arrested and dealt with in accordance with the law,” it added.