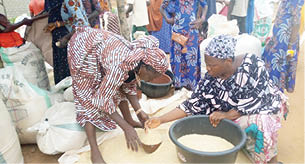 Nigerians are passing through difficult times as the cost of living continues to rise, Daily Trust reports.

Their purchasing power is also dwindling amidst rising inflation, which hit 19.6 per cent as of July 2022.

The value of the naira is also depreciating by the day even though regulatory agencies say they are doing everything possible to stabilise the economy.

Both salary earners and self-employed citizens are complaining that their earnings rarely meet up with family demands including feeding, health, education and housing.

But experts say the economic crunch is not in Nigeria alone, saying it is globally occasioned by the Russia-Ukraine war.

Energy and transport hit rooftop Surveys by our reporters yesterday in Kano, Abuja and Lagos, among other cities, showed that the high cost of living is mostly attributed to the skyrocketing prices of food items, energy, transport and other household consumables.

Data released by the National Bureau of Statistics (NBS) indicated that inflation rose to 19.64% in July, being the highest recorded in 17 years. The last time Nigeria saw such an increase was in 2005.

Nigeria’s food inflation has also maintained a steady rise from January to July. Rising from 17.13% in January 2022, food inflation jumped to 22.02% in July 2022, nearly 5%. The food inflation rise was caused by increases in prices of bread and cereals, food products, potatoes, yams and other tubers; meat, fish, oil, and fat.

Experts believe that as NBS readies to release the August report, the inflation rate may be higher than the 19.64% already recorded, signalling tougher times for Nigerians, especially on the day-to-day living expenses.

Going beyond figures and reports, some citizens said they are faced with increased difficulties in meeting their routine expenses just as their wages and salaries are not commensurate with the cost of their basic necessities.

Ibrahim Abdulmuminu, a father of one and Kano businessman, lamented how the cost of living has affected not only his marriage but his way of living.

He said, “Honestly, what we are experiencing now is a dilemma. When you talk about a hike in price, I am the one to tell you that because I am a businessman. This situation has negatively affected my business. If I had known, I wouldn’t have even got married at this time, talk less of raising a child. It is difficult.”

Salamatu Musa is a single mother of three. She said, “Prices of commodities have been rising significantly. It is in fact very tight and tough for us. What I used to buy with N10, 000 in the past, I can’t even try it with N15, 000.

“Sometimes I just find it difficult to even explain to my husband because this week, he gave N1, 000 to buy pieces of spaghetti, then next week, you need more money to get the same spaghetti,” she said.

Daily Trust also spoke with marketers at the popular Yankura market in Kano on why prices of produce are not coming down despite the fact that harvest has commenced.

They said the high cost of farm produce like pepper and tomatoes is a result of insecurity in other states of the Northwest as well as the heavy rainfall and flooding experienced this year.

People in Abuja and Nasarawa State said that the value of their income was dropping rapidly. This has confirmed what experts believe is the effect of inflation where more money chase fewer goods.  Joe Garba, a Gwarinpa resident, complained of the high prices of beverages and reduction in the quantity, something he said was an indication of corruption.

“Government agencies are not doing enough and Nigeria needs to have a price control board like Indonesia. Imagine, a tin of powdered milk now sells for nearly N4, 000 and if you buy and open it, the quantity has been significantly reduced. Even the sachet beverages too,” Garba lamented.

For Bayo Oyedele, a Nyanya resident of Abuja, what he gives to his wife as monthly upkeep has kept rising since last year.

“From N30, 000 monthly upkeep it has risen to about N90, 000 every month and yet, my wife said things keep adding at the marketplace daily,” he said.

And Dennis Omale, a guard at a plaza in Wuse, Abuja now sleeps at work and only goes home at weekends because his budget for transport could not be accommodated in the N40, 000 monthly earnings.

‘Our businesses grounded over high cost of diesel’

The heat is also being felt in Lagos. A printer in Ikeja, Mr Richard Aritedo, said in addition to the high cost of printing materials, which has affected his operation, the high cost of diesel has worsened the problem.

He said they now find it difficult quoting for jobs as many clients would challenge them for quoting exorbitant prices.

Aritedo, who is the CEO of Prosper Press, said, “We are using diesel, which has really affected the cost of our operation. Before diesel became over N800 per litre, we used to buy a litre for N200 and N220. Within this year, we bought them for N200 and N300. Presently, it is N780.

He called on the government to come to the aid of small business owners, saying things are hard for them.

Segun Sanusi, who operates a cold store in Ajegunle, said he has closed the business. “We can’t afford diesel and high taxes. We are more than 20 who have closed our businesses. I sold three of my generators and bought a taxi cab,” he said.

Some of our colleagues who are from the North and other parts of the South have gone back home saying they would only return when the economy improves.

Also speaking about the tough economic situation, a member of the Nigerian Economic Summit Group (NESG) and fellow at the Centre for Global Development in Washington DC, United States, Dr Zuhumnan Dapel, said a professor in Nigeria will need N611,000 in 2022 to buy what N342,000 was buying as of 2009.

He said, “More than a decade of inflation (and currency depreciation) decimating the wages of Nigerian professors: from US$2,300 a month in November 2009 to US$178 a month as of July 2022.  Inflation, within 176 months, has wiped out roughly N270, 000 from the take-home pay of the highest-paid lecturers.

“Had the government (the employer) decided to fortify the income of the academics against inflation, there would have been (based on my calculations) an annual pay rise of 2.15%,” he said.

The World Bank recently listed Nigeria and nine others as countries with the highest inflation rate as of 2021 when the rate was below 15%. The World Bank’s Country Director for Nigeria, Shubham Chaudhuri, in an interview in July, blamed government policies for the rise in inflation.

He said: “The major cause of it is food, meaning, increasing prices of food has been a lot more than 15%. The larger structural factors that people associate with this increase are; insecurity driving up food prices and, now, what is happening in Ukraine.”

On the solutions, Chaudhuri said: “I think, the government’s response should be at two levels: One level, I think it is a longer-term response of improving transport, security and agricultural productivity. Improving the food supply; if that helps, it will bring food costs down. The second part, which is a more immediate response, is the fact that a lot of the food price inflation is linked to specific policies of the government, which while the intentions were good in practice, are having unintended consequences.”

A financial analyst, Prof. Uche Uwaleke also believes insecurity and the high cost of transportation are the major cause of the spike in inflation.

He said, “Currently in Nigeria, food inflation is aggravated by insecurity, especially as the area considered the food basket of the country is bedevilled by bandits who prevent farmers from farming. Also, the frequent increase in the price of Premium Motor Spirit (PMS) has forced commercial bus and truck drivers to increase fares.

“The ever-increasing price of fuel that brought about the high cost of transportation; multiple tariffs on food being brought from villages to the town and illegal collections from uniform security men are food inflation factors,” Uwaleke said. Similarly, an economist, Mr Bashir Kassim said the Russia/Ukraine war as well as the low manufacturing capacity of Nigeria is making life difficult for citizens.

He said, “While other oil-producing countries are jubilating over the war due to the hike in oil prices, Nigeria is not happy. Also, the impact of the war on the food value chain is huge, especially wheat and other items; it has made it difficult for a consuming nation like Nigeria to access these items from other countries. Our manufacturing sector is weak, as such, it is only when you produce that you can export and earn foreign exchange but that is not the case here.”

He advised the federal government to declare an emergency in the agric sector and improve security so that farmers can go back to farms and manufacturers can produce what the country requires.

On whether the situation will improve, an economist in Abuja, Mr Ojoda Okopi, said with the global crisis fuelled by the Ukraine war, inflation may continue to rise in Nigeria.

“Before the Ukraine war, Nigeria already had a bad situation due to internal economic shocks, foreign exchange crisis, and insecurity. I don’t see inflation terminating at 20% this August. Nigerians would have to be innovative about spending for their basic necessities because it could continue till next year,” Okopi said.