The police in Ekiti State have arrested a herbalist, Nurudeen Ibrahim, at Aramoko-Ekiti for defrauding a 50-year-old married business woman of N10.4 million and having… 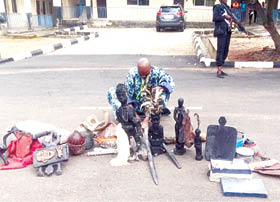 The police in Ekiti State have arrested a herbalist, Nurudeen Ibrahim, at Aramoko-Ekiti for defrauding a 50-year-old married business woman of N10.4 million and having sex with her several times.

The victim reported to the police that the herbalist sometime in September, 2019, when her business was retrogressing, told her to meet him for rituals in order to make her business flourish again.

She said between September, 2019 and 2021, the herbalist collected N8.4m through bank transfers and an additional N2.4m cash from her as the cost of the rituals.

The command’s spokesperson, DSP Sunday Abutu, explained that, “The suspect had carnal knowledge of her more than thrice and threatened that she would die if she informed anyone, including her husband.”

He said she decided to open up to her family members after she started noticing signs in her body: lost her menstruation, lost her business and became very ill, after which a family member informed the police which led to the arrest of the herbalist.

Abutu added that the suspect admitted that he only collected N8m from her in order to assist her in prayers that would boost her business.