The leadership of the Peoples Democratic Party, PDP has been urged to field Lagos State Governor, Mr. Akinwumi Ambode as its automatic candidate ahead of… 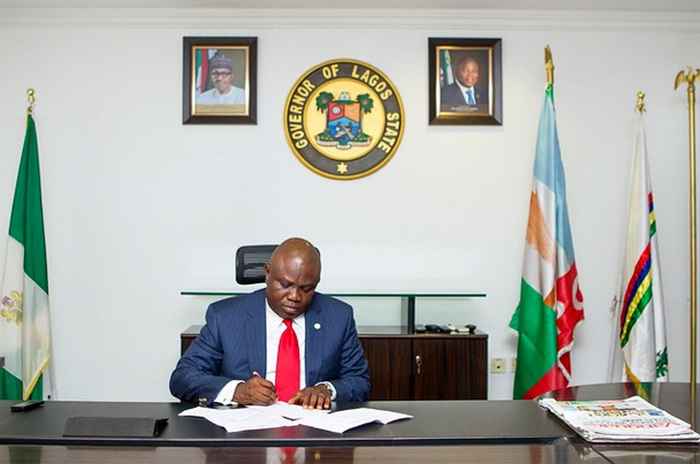 The leadership of the Peoples Democratic Party, PDP has been urged to field Lagos State Governor, Mr. Akinwumi Ambode as its automatic candidate ahead of the 2019 elections in the state.

A group known as the PDP New Youth Circuit made the call in Abuja on Wednesday following the reports of a feud between Governor Ambode and APC National Leader, Asiwaju Bola Tinubu that has seen the party’s leader reportedly backing another candidate in the race.

The group made exceptions to the reports that the party has offered the ticket to oil businessman, Mr. Femi Otedola.

The group’s spokesman, Mr. Williams said that Ambode is the most realistic option to reclaim Lagos state for the Peoples Democratic Party.

2019: Femi Otedola to run against Ambode

Williams said: “Ambode should be embraced by the PDP. Having the governor of Nigeria’s most important state will bolster our party’s chances in the 2019 general elections as we seek to remove the failed government of the APC at the national level. The party must not throw away this chance to consolidate its effort to take back power in 2019.”

He said Mr. Otedola was a fine candidate but not what the party needs now. The group reminded the party that the PDP in Lagos has been weakened following the defections of former Minister, Musuliu Obanikoro and party chairman Salvador to the APC.

“Ambode will bring people and a government machinery behind him, that is what we need now,” the group said.

Meanwhile Ambode on Wednesday said reports of him having a rift with Tinubu, were untrue.

Gov. Ambode made the clarification in a statement signed by his Chief Press Secretary (CPS) Mr Habib Aruna, in Lagos.

Both the social and traditional media have been awash with news of a major rift between Tinubu and Ambode over alleged disagreement on the second term bid of the governor.

Aruna quoted Ambode as telling party faithful in Epe during the election of delegates for the Presidential primary election and national convention of the party that the reports indicating a fight between him and Tinubu were out of place, and there was no fight anywhere.

“We are praying to God that the best is yet to come and the best will be what Lagos State deserves and I want you to just continue with your prayers that at this time, God will show His hand and make sure that everything that is of blessing to Lagos State and also blessing of Epe will come to pass,” Ambode was quoted as saying.