Gov. Ugwuanyi @ 58: Celebrating the passion, achievements of a peaceful leader

By Louis Amoke The consensus that he is a man of peace and a God fearing leader is growing beyond imagination. The verdict that he… 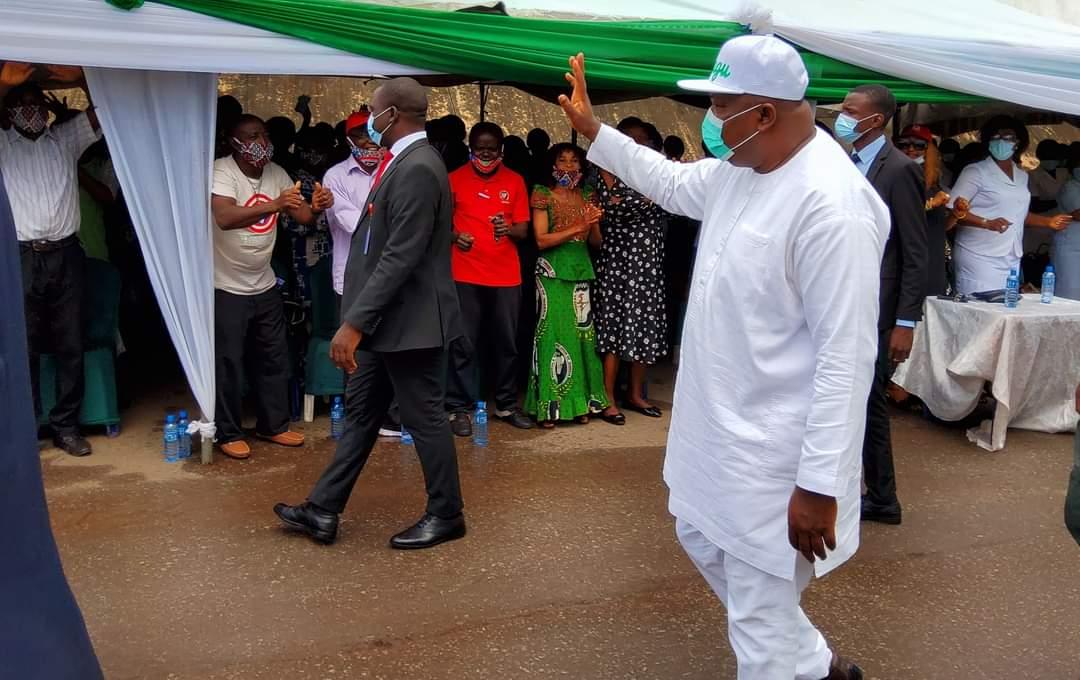 The consensus that he is a man of peace and a God fearing leader is growing beyond imagination. The verdict that he is humble, caring, kind-hearted and compassionate about the lowly, downtrodden and the less privileged in the society is indisputable.

The endorsement of his visionary approach to governance and remarkable achievements in office with limited resources at his disposal in the face of enormous challenges in the country remains overwhelming. His popularity across the board keeps swelling by the day. His political sagacity, acceptance and accommodating spirit are by all measures charming.

His sheer determination in striking a balance to close the wide gap existing between the urban and rural dwellers in terms of distribution of democratic dividends is unprecedented in the annals of Enugu State.

Attaining 58 years of age on Sunday (today), March 20, His Excellency, the Governor of Enugu State, Rt. Hon. Ifeanyi Ugwuanyi, fondly known as ‘Gburugburu’, has proved beyond reasonable doubt that these striking traits, widely acknowledged by his peers and beyond, are inbuilt and his unbeatable sterling attributes are not easily found among his contemporaries.

In one of his assertions, the Spiritual Director of Adoration Ministry Enugu Nigeria (AMEN), Rev. Fr. Ejike Mbaka described Gov. Ugwuanyi as a rare, peaceful and God-fearing leader who has continued to lead the state with uncommon zeal, passion and humility even after his re-election in office, stressing that “Enugu has never had a kind-hearted leader like Ugwuanyi”.

Also in his recent verdict, Rev. Fr. Mbaka stated that Gov. Ugwuanyi remains the most peaceful governor in Nigeria, adding that the governor is a father to all and a very friendly governor who cannot do without making peace.

The Spiritual Director stressed that Gov. Ugwuanyi’s “name should be peace”, maintaining that peace is in the governor’s nature and “peace is in his integrity”.

Conferring the ‘Most Peaceful Governor in Nigeria’ award on Gov. Ugwuanyi recently, the National President of the Messengers of Peace Foundation, Dr. Sulaiman Adejoh, explained that the honour was in recognition of the governor’s zeal, steadfastness and untiring efforts at ensuring that “there is calmness in Enugu State and Nigeria by extension”.

According to Dr. Adejoh, “We have taken note of these efforts because it is not ordinary. It takes somebody that has something upstairs and a man of peace to be able to use all the connections including God to make sure there is peace in his state.

“And by the power given to you as the serving Governor of Enugu State, you have used your God-given ability to make sure that there is relative calmness”.

Peace no doubt is expensive to maintain in terms of finance, sacrifice and forbearance but guarantees security, rapid development and growth. Gov. Ugwuanyi’s simplicity, open-door policy, tolerance, penchant for peace and direct contact with everyone, irrespective of class or status, are eloquent testimonies to his sophisticated background and extreme commitment to the progress of Enugu State and wellbeing of the residents.

Serving as a governor when the economy of the country is facing severe challenges with lean resources to attend to the needs of the people, coupled with the issues of insecurity and public health (COVID-19), which occupied the major parts of 2020 and 2021, Gov. Ugwuanyi who entrusted Enugu State to the Hands of God, has ensured a peaceful, secure, inclusive and rapidly developing state.

This is despite the fact that Ugwuanyi is the first to govern Enugu State under such harsh economic, security and public health challenges in the country. Consequently, he is the only governor of Enugu State to witness two economic recessions in six years of his administration, the recent #EndSARS protests and a pandemic (COVID-19) that brought a major setback to the entire world in terms of growth and development.

Besides, Ugwuanyi is also the first governor of Enugu State whose political party (PDP) is not in control at the national level with all the associated disadvantages in terms of special privileges that assist states of the ruling party to achieve governance breakthrough when it matters most.

Keeping faith with his driving principles of entrenching peace and good governance and addressing the hydra-headed imbalance between the urban and rural populace, Gov. Ugwuanyi has provided quality leadership and opened up the rural areas with massive infrastructural development and other basic amenities in a manner that has endeared him to the dwellers.

The governor’s special interest in taking democracy dividends to the doorsteps of the rural dwellers of Enugu State, the long neglected, to give them a sense of belonging is novel in the state’s history and a mark of conscience.

This was obviously the major reason the people of Enugu State overwhelmingly reelected him in 2019 with unprecedented 95.54 percent of the votes cast. The landslide victory was actually the highest in the nation’s electoral history.

In spite of the nation’s unfriendly economic realities and other sundry challenges, Enugu under Ugwuanyi’s watch is in the list of few states that pay N30,000 new minimum wage to their workers with the consequential adjustment, without any form of rancour.

His administration has covered about 700km of urban and rural roads largely concentrated in the rural areas. The first flyover bridge to be constructed by Enugu State government is nearing completion at Nike Lake Road T-junction, Enugu, courtesy of Gov. Ugwuanyi.

The ultra modern 5,000-seat capacity Township Stadium, Nsukka, aimed at promoting and encouraging grassroots sports development and youth empowerment, is at the final stage of completion following the successful installation of AstroTurf, Tartan Tracks, Seats, and flood-light stands, as well as pavement works. It is gratifying to note that the construction of a similar befitting Township Stadium in Oji River Local Government Area was captured in the 2022 budget.

Deeply concerned about the wellbeing of the rural dwellers, Gov. Ugwuanyi has renovated District Hospitals and constructed healthcare facilities such as Type 3 Healthcare Centres, Cottage Hospitals with Isolation Wings and an Amenity Hospital (ongoing) in the rural areas to provide adequate and affordable healthcare services to the people.

Besides the ongoing massive construction works at the permanent site of Enugu State University of Science and Technology (ESUT) Teaching Hospital and College of Medicine, Igbo-Eno, a multi-billion naira project, Gov. Ugwuanyi’s administration rehabilitated the former Colliery Hospital Enugu, with the construction of new structures, and transformed it to Enugu State Infectious Disease Hospital, for isolation and treatment of patients with infectious diseases.

In Education, Gov. Ugwuanyi’s administration has recruited 5,030 primary school teachers under the Enugu State Universal Basic Education Board (ENSUBEB) and over 2,000 secondary school teachers under the Post Primary Schools Management Board (PPSMB). His administration has constructed, renovated and equipped 1,255 classroom blocks and other school projects under ENSUBEB, and procured and distributed over 50,000 classroom furniture and other learning tools for primary school children and their teachers.

Under the PPSMB, Gov. Ugwuanyi’s administration has so far supplied and installed computers in 209 secondary schools and science equipment in 294 secondary schools; constructed and renovated classroom blocks, offices and hostels, among others.

The story is the same in the state owned tertiary institutions. For instance, the Institute of Management and Technology (IMT) Enugu which is now a degree-awarding Institute courtesy of Gov. Ugwuanyi’s administration has witnessed massive infrastructural transformation through construction of multiple landmark projects.

These projects include block of 15 ultra-modern classrooms on two suspended floors with seating capacity of 1,224 students; block of ultra-modern offices for Registry Division (Exams and Records) with accommodation for a minimum of 75 staff; block of fully furnished ultra-modern Academic Staff Office complex comprising 60 offices with intercom facility; and a world-class Medical Centre with all necessary appurtenances for provision of quality medical services to staff and students of IMT Enugu.

During their inauguration recently, Gov. Ugwuanyi disclosed that the intervention became imperative to provide the needed infrastructural transformation in IMT, Enugu, as well as save the Institute from total collapse and full withdrawal of its accreditation. It was only possible under Gov. Ugwuanyi’s watch for IMT, Enugu to hold its first convocation, after 11 years.

In security, Gov. Ugwuanyi as a security conscious and peace loving leader has made huge investments to keep Enugu State safe and secure as well as maintain its enviable status as one of the most peaceful states in Nigeria. All the security agencies have continued to appreciate the governor for his outstanding support and cooperation.

The Enugu State Judiciary has equally witnessed unprecedented infrastructural interventions in its history with numerous landmark projects such as the building and equipping of 24 Magistrate Courts (16 of which are brand new); massive renovation of the State Judiciary Headquarters complex, Enugu; construction of the first Enugu State Customary Court of Appeal Headquarter complex in Enugu; and the construction of 34 brand new model Customary Courts (two per local government) across the 17 local government areas of the state simultaneously, to give them a new lease of life and relevance in line with international best practices for efficient and effective dispensation of justice in the rural areas and beyond.

Huge investments have also been made in other sectors such as investment promotion, agriculture, workers’ welfare, ICT innovation, Small and Medium-sized Enterprises (SMEs), youth and women empowerment, housing development, among others.

It is interesting to note that Enugu, yet to be recognized as an oil producing state, under Gov. Ugwuanyi’s watch, was rated among the six economically most viable states in the country that can survive without federal allocations. It was also rated as the second most advanced state in Nigeria, on the Ease of Doing Business by the World Bank Group; one of only three states out of the 36 states of the federation that have fulfilled obligations to their workers (BudgIT); and among the seven states that are solvent with an impressive over 30 percent Internally Generated Revenue (IGR) to fund additional economic activities (Economic Confidential magazine verdict), among others.

Politically, Gov. Ugwuanyi has exercised effective and inclusive leadership, galvanized the ruling Peoples Democratic Party (PDP) in the state to record landslide victories in all the elections contested under his watch, asserting that “in the fullness of time, dialogue, justice and equity shall take pre-eminence” in respect of 2023 general elections.

As family members, friends and well wishers of Gov. Ugwuanyi roll out the drums to celebrate a man of peace and great achiever of inestimable value today, the remarkable occasion connoting with the Lenten Season calls for prayers and reinvigorates the governor’s long-held belief in charity and alms giving, in appreciation to God for His mercies and kindness to him as “Nwaogbenye”.