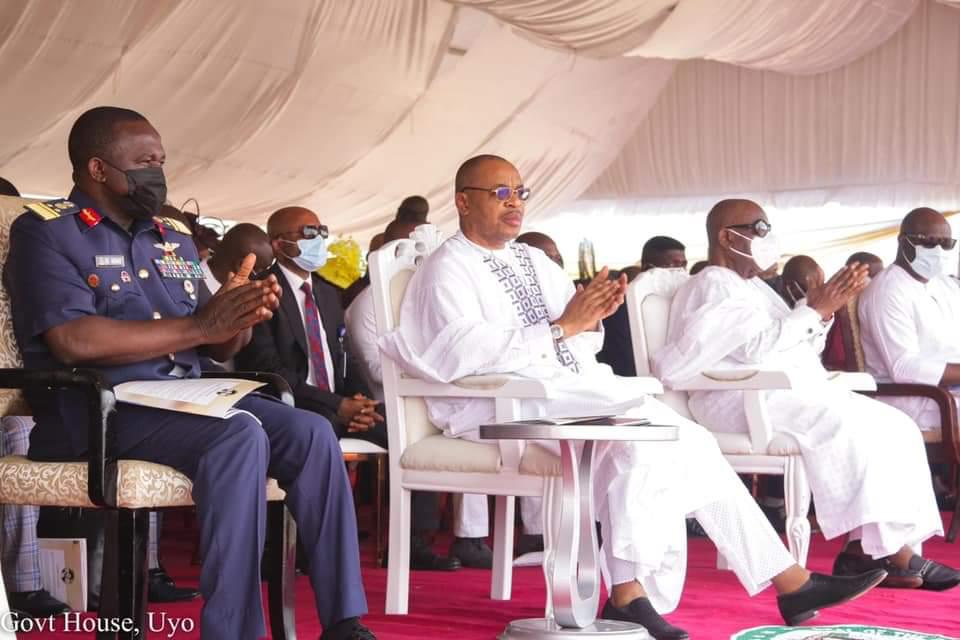 The Governor presented a Certificate of Occupancy for the property to the Chief of Air Staff, Isiaka Amoo while on a condolence visit over the demise of the former Airforce Chief, Air Marshal Nsikak Eduok.

Emmanuel declared the readiness of the state government to strengthen its partnership with the Nigerian military in its training and logistics needs.

He disclosed that the terminal building under construction in the state-owned airport once completed will offer an in-country Maintenance, Repair and Operations (MRO) facility that would support the training facility without need for foreign exchange.

According to him, “our major gateways of development are at advanced stage. Our road network is one of the best in the whole country. Talk about air, our airport has an upgraded category two runway that can still take commercial flights even in bad weather.

“By the time we finish our terminal building, it will have no rival in Africa. Even our taxiway is built as a proper runway so it can serve anytime we want to resurface the main runway. So you can’t have air training school anywhere in this country better than in Akwa Ibom.

“We have a lot in terms of infrastructure that we can partner. Our MRO will soon be ready, so flying your aircrafts abroad for servicing will no more be fanciful. Pay us naira, use our facilities and you save your foreign exchange”.

Speaking at Ibom Hall Ground in Uyo during the funeral service of Late former Chief of Air Staff, Air Marshal Nsikak Eduok(Rtd), Governor Emmanuel said with the renowned sterling attributes of Akwa Ibom, the indigenes should be given more opportunities in the military services in the country.

“I want to use this opportunity to appeal to the Chief of Air staff that every year you advertise, our people apply in numbers. Please we will use this occasion to solicit for a larger percentage of our people in the Armed Forces,” he said.

He bemoaned a situation where only nine people were considered from the state, despite the hundreds of brilliant young people who applied for recruitment into the service from his state. He expressed deep grief over the demise of the late Air Marshal Eduok, whom he described as a trial-blazer, an epitome of courage and a decorated Air Force Officer who will be greatly missed by all.

“I stand here today filled with a deep sense of loss and grief on behalf of the Government and the good people of Akwa Ibom State, to bid farewell to a quintessential Nigerian patriot, a trail-blazer, an epitome of courage and bravery, a decorated Air Force Officer and above all, a husband, father and a devout Christian the Late Air Marshall Nsikak Eduok”, he stated.

The governor eulogized the sterling characteristics of honesty, transparency, integrity and inspiring ideals and innovations the late Air Force Officer brought to bear in the course of his career where he rose to the pinnacle of the service.

The Governor thanked President Muhammadu Buhari, for sending his condolences to the family of late Air Marshall Nsikak Eduok, and also used the occasion to condole with the families of the Airforce officers who lost their lives in the recent plane crash near the Abuja Airport and congratulated the new Airforce Chief on his elevation and prayed that his efforts in curbing insecurity in the various parts of the country yield results.

In an earlier remark, the Chief of Air Staff, Air Vice Marshal Isiaka Amao, thanked the Governor for the warm reception accorded him, the logistics support given for the burial of late Air Marshall Nsikak Eduok and for the C of O allocating 30 hectares of land for the Air Traffic School in the state.

He admitted that the state is the best location for the establishment of the Air Training School.

He assured the state government that the Nigerian Airforce will expedite action towards the establishment of the school.