All roads led to the palatial residence of the Ohinoyi of Ebiraland, HRM Dr Ado Ibrahim, as he marked his 25th anniversary on the throne… 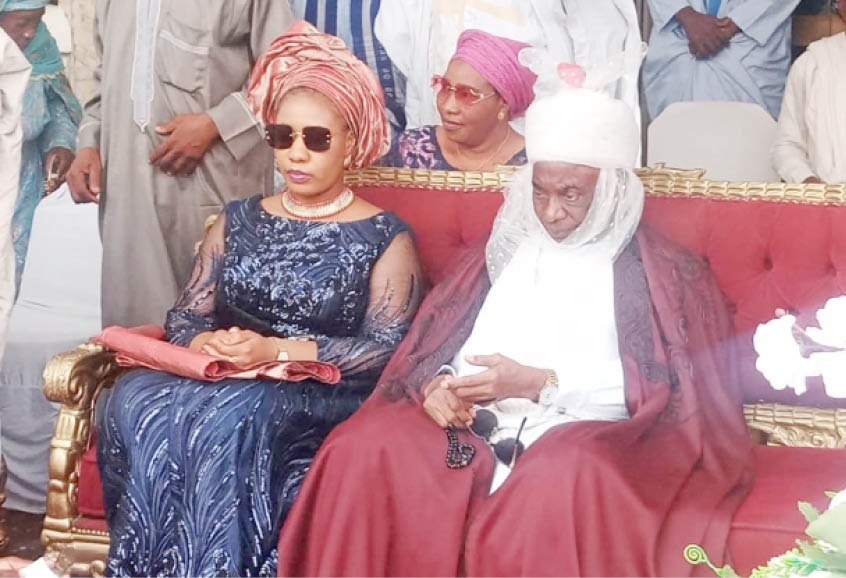 Ohinoyi of Ebiraland and his wife

All roads led to the palatial residence of the Ohinoyi of Ebiraland, HRM Dr Ado Ibrahim, as he marked his 25th anniversary on the throne penultimate Saturday at his palace in Okene.

The occasion attracted thousands of his subjects, royal fathers from within and outside the state, as well as eminent personalities from all walks of life.

The 93-year-old sage, who has been variously described as a living legend by some of his subjects, has given a lot to the Ebira ethnic nationality and humanity.

As one of the revered monarchs in northern Nigeria, the activities marking his silver jubilee celebration on 11th June speaks volumes.

Daily Trust on Sunday noted that despite the ceremony being dubbed as low-key, the Ohinoyi’s palace was agog with funfair.

The atmosphere at the palace on the fateful day spelt royal splendour, opulence, glamour and affluence. A gale of great people were on hand to add glamour to the occasion, while different Ebira cultural troupes displayed the rich culture of Ebira land.

By 1pm on the day, activities marking the silver jubilee celebration had peaked. Various cultural troupes were at their best, displaying to the administration of all, with guests seated to rejoice with His Royal Majesty.

The palace was a beauty to behold. The magnificent edifice never loses its finesse and glamour despite being in place for years. Its architectural design still stands the test of modern times. It allures any day. Many likened the modelling of the palace to the Buckingham palace.

Daily Trust on Sunday learnt that the Ohinoyi has consistently been overhauling the design of the palace for years to meet up his taste.

“His Royal Majesty is a great king with high quality taste. He has consistently been altering the original design of his palace to meet up with what he has in mind.

“No year passes without an introduction of a new design in the palace. He has not yet achieved what he wants his palace to look like. If you come here next year, you will meet a new design. He tells us that in life, it’s not wise to stick to an idea or plan, but to rather change and charge up, to meet up with modern times. It makes one relevant in the society,” said Alhaji Usman Ogrima, a subject who came to celebrate with him.

A great daughter of Ebiraland, Chief Barr. Natasha Hadiza Akpoti-Uduaghan, the Ohiogu of Ebiraland, described the monarch as the most cheerful and gracious king that can hold people, particularly his subjects, spellbound with his ways of doing things.

Another title holder, Chief Damalas Ojia, the Eyize of Ebiraland, said the life of the monarch is “a compass, shinning light” for many to take their right bearing in the society.

The appellation of SA’AKI announced the royal entry of the Ohinoyi to the venue of the occasion with ovation from the crowd. Thereafter, different groups were given the nod to observe the ‘royal greetings’.  It was quickly done by various groups, including notable guests with royal norms and culture.

The humorous side of the great monarch drew loud applause from the audience during the royal greetings.

On announcement that the Ata Igala’s emissaries were set to pay obeisance to the king, he said “Ga’baidu (Ata Igala) should not leave his seat to come and great me oooo.” And the three-man Ata Igala representatives chorused, “Please accept our request in the spirit of this occasion.”

To many, this ‘royal humour’ brought to the fore the reported rich traditional affinity between the Igala and Ebira tribes, which date over centuries.

As the various cultural troupes came out to display, Jimoh, the acclaimed best drummer in Ebira land did not disappoint the crowd.

The drummer and his team proved their prowess in drumming, beating to shoot the rhythm of each singer or team, as the royal kinsmen danced in ecstasy.

“He is the best drummer for now in the land. Any great occasion in Ebira land without him drumming would lack glamour and importance,” said Ohiare Adeiza, a kinsman of Jimoh.

However, the unending cases of insecurity and embarrassing youth unemployment bedevilling the nation were foremost in the Ohinoyi’s address.

The monarch applauded the efforts of the state government to end cases of crimes and criminalities in various communities, urging all hands to be on deck. He also called on his subjects to support the government at all levels in the fight against surging criminalities for a peaceful society.

He added that security is everybody’s business, stressing that a society without peace of mind cannot develop effectively.

He therefore charged parents to intensify effort in the training of their children and wards for them to have a good sense of direction for a better society.

He also advised youths to go to school and acquire education, adding that those who could not, should devote their time in skills acquisition to be self reliance in the competitive society.

Sons and daughters of Ebira land used the occasion to bare their minds on some issues concerning the nation.

The Chief Executive of Connect Development, Ambassador Hamzat Lawal, stressed the need to strengthen traditional institutions constitutionally to assist in fighting crimes in the communities.

The anti-corruption activist and ambassador in the nation of Israel stated that traditional rulers were key figures who made the colonial administration very effective in achieving its mandate, especially in the area of tax collection and enforcement of the law and authority.

Ambassador Lawal therefore urged the federal government to empower traditional institution via legislation to be more efficient in fighting crimes to reduce cases of insecurity occasioned by kidnappings, banditry, armed robberies and the likes.

He added that traditional rulers in any given society are critical stakeholders who cannot be overlooked in combating insecurity cases, as such the institution must be recognised constitutionally for effective policing at the grassroots to stem the tides of criminalities.

While he advocated the need for community policing to fish out criminals ravaging different communities in various states, he said the traditional rulers enjoy the trust of their subjects, as such they are in the know of whoever is living in their domain at any given time.

“If the traditional rulers work with the government, they can reduce criminals and criminalities in the society, with ease. The government only need to build trust on them to achieve desirable results,” he said.

Also, the Vice Chancellor of Prince Abubakar Audu University, Anyigba, Professor Marietu Ohunene Tenuche, said traditional institutions all over the world had played roles, and are still playing in the development of many nations.

She urged the nation’s leadership to restore their role of the old for them to coordinate activities in conjuction with the apparatus of government for a peaceful society.

“Ohinoyi of Ebiraland is a traditional head of Ebira traditional society. If given the role, he can coordinate to complement the effort of the government effectively to ensure peace and security of the land,” she said.

Equally, Barrister Ramat Tijjani Attah, an international jurist, said the nation needs experience and capacity filled leaders to take the country out of the woods.

The jurist-turned-politician further stated that age has nothing to do with leadership, saying that since nobody is an island, no one can do it alone and achieve desired dividend.

The barrister added that traditional rulers are closer to the people, and if they are empowered constitutionally, they can do better in the nation.

“They are the closest leaders to the people. They are in a better position to reach the people effectively. If their responsibility is increased by law, traditional rulers would help the government to navigate properly for better landing in any storm,” she said.

To the Oyize of Ebiraland, Chief Barnabas Ojiah, the reign of Dr Ado Ibrahim remains the best blessing so far in the history of Kogi State, saying that many of their kinsmen are now better placed in the act of governance and more position of trust in the state, and in the nation at large.

“Under the reign of HRM, Dr Ado Ibrahim, the Ebira ethnic tribe produced an executive governor of the state, Alhaji Yahaya Bello. And many more are enjoying various appointments within the state and the federal government,” he said.

The well-organized occasion, which drifted to a close towards late afternoon, will remain evergreen in the minds of His Royal Majesty, kinsmen and dignities who graced it.