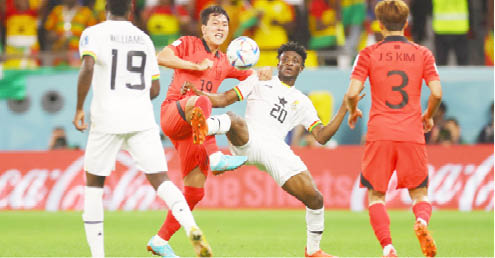 Mohammed Kudus scored twice to help Ghana beat South Korea 3-2 in a World Cup Group H thriller at the rocking Education City Stadium yesterday, keeping the Black Stars in contention for a place in the last 16.

Against the run of play, Ghana went ahead in the 24th minute when Mohammed Salisu struck from close range after South Korea failed to clear a free kick and Mohammed Kudus add a second with a glancing header to give the African side a 2-0 halftime lead.

Kudus grabbed the winner in the 68th minute when he was left unmarked in the penalty area and slotted home past a diving Kim Seung-Gyu.

In the same vein, Cameroon striker, Vincent Aboubakar came off the bench to score one goal and set up another as the Indomitable Lions rescued a point in their 3-3 draw with Serbia Yesterday that ended a run of eight successive World Cup losses for the African side.

Jean-Charles Castelletto gave Cameroon the lead just before the half-hour mark, but a quick-fire double at the end of the first period from Strahinja Pavlovic and the hugely impressive Sergej Milinkovic-Savic swung the game in Serbia’s favour.

When Aleksandar Mitrovic added another early in the second period his side looked in complete control and cruising to a win.

But Aboubakar, who top-scored at the Africa Cup of Nations finals earlier this year, turned the game around when he came off the bench.

He netted a fine solo goal with an audacious chip over the keeper to reduce the deficit, before breaking forward and crossing to Eric Maxim Choupo-Moting to smash in the equaliser three minutes later.

Brazil backed up their opening victory over Serbia to top the group with maximum points and will guarantee top spot with a point against Cameroon in their final game.