Gagi: Inside a diverse community in Sokoto 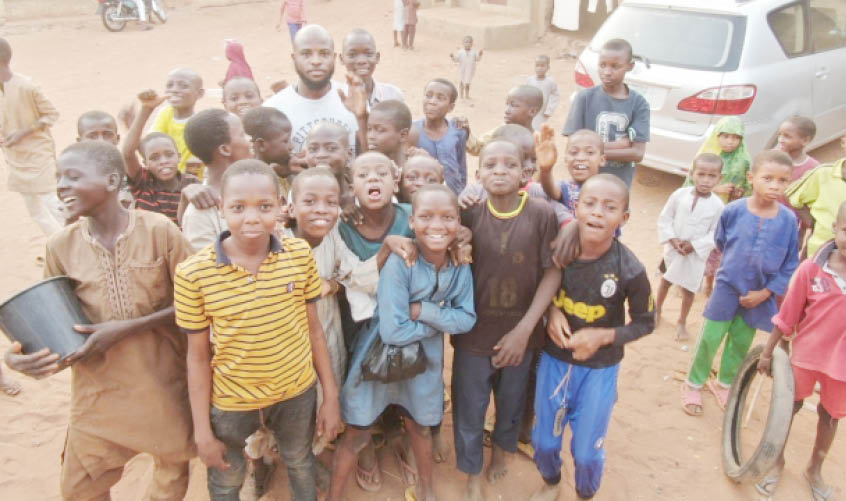 Gagi is a multicultural community in Sokoto South Local Government Area. Igbo, Ijaw, Hausa, Berom, Itsekiri, Yoruba, Kaje, Gbagyi and many more populate this area. These groups are present in other parts of the state, but have higher numbers in Gagi. A friendly mixed population has evolved in the community, which is home to many places of worship.

Sani Umar Jappi is the Sarkin Yakin Gagi and district head of Gagi. He is the ‘King of War’ in the community, or leader of warriors. Jappi hails from a long line of warriors, which have always defended Sokoto, a role they have faithfully played over the years. Gagi itself is over 200 years old and lies east of the state capital.

In an interview with Daily Trust Saturday, Sarkin Yakin Gagi drew attention to his lineage. “Yerima Sambo was the first Sarkin Yaki. He killed Tambari Hurja from Niger Republic, a bandit who attacked many communities. Since that time, the Sultan appointed us the second Sarkin Yaki under the caliphate because of the success achieved during the battle with Tambari Hurja. My father, grandfather and great grandfather, all bore the title of Sarkin Yaki. I am the 11th Sarkin Yaki. There were five or six Yerimas on the throne before they were upgraded to become Sarkin Yaki.”

Today, Sarkin Yaki is a warrior of a different mould. Although he may not carry a sword and shield or ride a horse to go after enemies of the Caliphate, as his forebears did, say 150 years ago, he is engaged in a war against hate, ignorance, poverty, neglect, injustice and exclusion in his community. His shield and sword are not physical tools but mental and ideological.

Toby Ghaghara, the leader of the Igbo community or Sarkin Igbo in Gagi said, “Sarkin Gagi doesn’t discriminate. His exposure has contributed a lot. As you rightly said, churches and mosques share the same fence and everybody knows their boundary. You don’t just cross it anyhow. When there is any development, they come to me, we settle things amicably. There will be no going to court or police. People are buying land and developing.”

Jappi is on a mission. He wants to see women and girls receive education. He wishes to end poverty, as well as begging, and to spread love among a diverse social and cultural group. A cosmopolitan, multicultural and multi religious community has, therefore, arisen in Gagi.

Sarkin Yaki opened up on the high concentration of places of worship in Gagi. “You cannot count the number of churches in the area. And they have the right to own the churches and serve the Lord, based on their religion and scriptures. Close to the month of Ramadan, you will see youths organised in the community, coming together to celebrate the breaking of fast. And you will see pastors, Christian youths, women groups, Muslim groups coming together to break the fast. We have sustained this over the years.”

“It is a very peaceful experience. We live in harmony. Today, I can go to the palace of Sarkin Yakin Gagi and will be welcomed. When it comes to interfaith dialogue, Gagi is a good example. Gagi should be a good example to other communities in Nigeria. There is nothing more than tolerance. We understand our differences. This tolerance is one of the guiding principles in this community and is the background to communal living here,” The Rev (Fr) Nuhu Bala, a priest in the Catholic Diocese of Sokoto said in an interview with Daily Trust Saturday.

Nasiru Alhaji, an author and historian also said, “Sarkin Yakin Gagi is a very hospitable, kind and patient person. He receives people with open arms. The number of churches in Gagi confirms this to you. They are given red carpet treatment, that’s why they come to Gagi.”

“Gagi people, starting from their Sarki, are very accommodating. You accommodate people when your mind is free. If your mind is not free, it will be very difficult for you to accommodate people. They don’t harass non-indigenes. That’s why Gagi is peculiar. If you go to other parts of Sokoto, it may not be like that,” S.O Rabiu, a professor of Arabic Studies at the Usman Dan Fodio University said.

Paschal Ofokansi (Passmark) is one of the major players in the pharmaceutical trade in Sokoto. He arrived in the city in 1986 and patiently built his establishment over time. He can be given more than a pass mark on account of his love for his adopted city, as well as his patience and determination.

He said, “I came to Sokoto serving somebody. That was in 1986. By 1990 he settled me to start my own business. The story of ‘passmark’ started in 1990. I lived in the community from 1990 till 1995. My eastern brothers are on top of the game. Gagi is a model. How I wish other sections of Nigeria would emulate the Gagi model. It gives liberty to anybody no matter where you come from.”

Abdulfatai Coker, the Sarkin Yorubawa or leader of the Yoruba community in Sokoto also said, “I think Gagi is one of the best things around. You are bound to be in love with such persons.

“I represent the Yoruba headship in Sokoto State generally. I am the fourth Sarkin Yoruba. We have a history of more than 200 years here.

“I was born here and started going to the Sultan’s palace at the age of five. My father was a very good friend to Sultan Abubakar III. That paved the way for us. When coming from Sokoto he would stop at our house in Mayanci, Zamfara State. That was in the 1940s, where the Sultan would be visiting the home of non-indigenes. When I was a child, the Sultan, in the course of his visits, would draw me close to sit on his thigh.”

Northern minorities are also present in Gagi. Ishaya Bagai, Sarkin Southern Kaduna told Daily Trust Saturday that, “Sokoto is peaceful. This is our story here. When you go to other parts of the state, people are saying the same thing. The Sultan is always with us, we are always at the palace.

“In the photograph there you will see the Sultan offering me something to drink. That is the height of tolerance, humility and respect, where an ordinary Southern Kaduna chief is offered a drink by the Sultan. He is a father indeed.

“There is peaceful coexistence with the people of Sokoto. Seventy per cent of the churches are found in Gagi. If he was not good, such things would not take place.”

A drive through Gagi revealed that there are many hotels and businesses in this part of Sokoto, and they are owned by Igbo businessmen.

Igbo landlords are in their hundreds, many constructions are ongoing, and there are clear signs of huge investments in the locality. Gagi is a popular destination for many. This is also as a result of the various security formations located within or around it.

“Gagi it gives you an attractive welcome. I know that Sarkin Gagi is very young and he is building on the legacy people before him left. He is doing it well and it is commendable.”

Sunday Nwafor, who hails from the South East, lives in Gagi. A few years ago he turned to the kilishi trade and has become a big player in the business. He employs many young Hausa boys who help with the production of the northern delicacy.

Mr Nwafor has brought in new production techniques, such as the use of a microwave, said Lilian Eze, the manager of Osinachi Agricultural Products, Sokoto.

A part of Gagi has been named ‘Small Nigeria.’ This is a reference to the huge concentration of diverse groups from different parts of the country who reside there.

“In Salame, we have a mini Nigeria. All tribes have their representatives here. We love one another. If you go to old airport you would think you were in Offa or Enugu. That is why I involve them in my Council. I involve both Muslims and Christians. I have pastors as part of my Council. If you go inside the old airport you cannot count how many churches you find there. We made a survey and saw 50 of them. But now, I am sure there are more,” Gidado Umar, Ubandawakin Salame said.

“Their leader is one of the charismatic district heads we have. He is carrying his people along with numerous social interventions and social programmes that will assist his community, not only in coming together but in fighting poverty and improving health care delivery.”

An early warning system helps to keep the peace in Gagi. This system connects the various multicultural groups with their hosts in the community, Sarkin Yaki said. The warning system, which incorporates the police, vigilante groups and heads of various communities, has worked effectively on a number of occasions.

The Sarkin Yaki Daily Trust Saturday that he has Yoruba, Igbo and Edo genes in his family, adding that a future Sarkin Yaki is likely to have Igbo blood.

“My uncle is married to a Yoruba. One of the children can succeed me as the king of this community, so how can people like him fight the southern minority? My grandmother was married to a Yoruba man 80 years ago and some of her grandchildren are Christians in Ogun, and some in Lagos, partly Yoruba, Fulani Igbo.

“One of us must protect the interest of Yoruba and Igbo because they are part of the family. One of my brothers, Gidado, is married to Igbo. I don’t have power to insult Yoruba or Igbo because of their presence in my family,” he said.