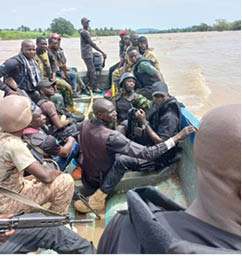 Operatives of the G-7 security apparatus in the FCT have arrested four suspected kidnappers’ informants at Farakuti community in Kwali Area Council.

City & Crime reports that the G-7, comprising the police, military and other security agencies, is one of the security apparatuses of the FCT and six neighbouring states saddled with the march against banditry and other crimes.

Spokesperson of the FCT Police Command, DSP Adeh Josephine, in a statement on Wednesday, said the G-7 operatives, led by DCP Benneth C. Igwe, made the arrest during a patrol.

She said the suspects, who came to buy foodstuff and other items, were arrested after intelligence information.