Furore over killing of elephant in Ogun

Last week, poachers shot and killed an elephant in Ogun State. This was the fourth elephant killed in the area in two years, raising concerns… 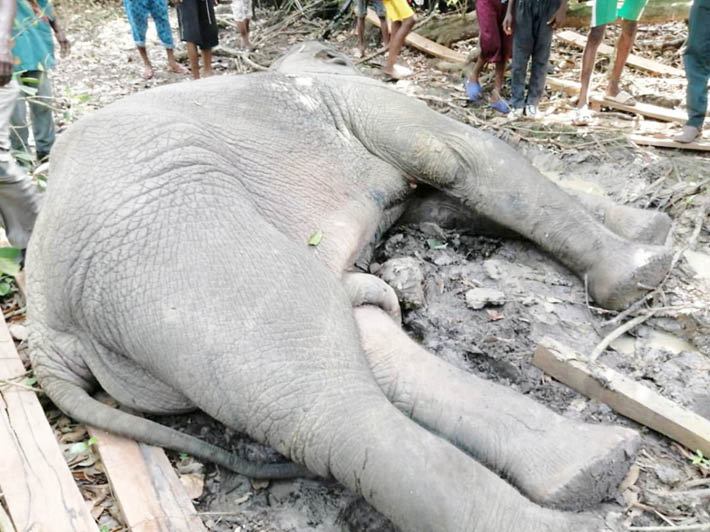 The remains of the young male elephant

Last week, poachers shot and killed an elephant in Ogun State. This was the fourth elephant killed in the area in two years, raising concerns about Nigeria’s dwindling elephant population.

For years, wildlife conservationists have estimated that there are about 200 wild elephants in Nigeria. The number is small and most of them live in protected forest reserves in the country.

The killing, last week of one of these wild elephants by local poachers in Itashin Forest in Ijebu East Local Government Area of Ogun State has generated outrage among Nigerians.

The 10-year-old male elephant died on Friday from gunshot injuries, Daily Trust gathered, bringing to four the number of elephants allegedly killed by the locals in the last two years in the state.

The carcasses of the other three were discovered at various times in the forest.

The activities of poachers and farmers in the elephants’ habitat often led to clashes with the locals. This forced the 50 or so elephants and their young ones to leave the J4 Area of the Omo Forest Reserve to find a new habitat in the Itashin Forest, on the border between Ogun and Lagos states.

A local, who identified himself simply as Sunday, is familiar with the activities of the elephants. He told Daily Trust that the local hunters last week “renewed hostility” by shooting the male elephant, which later died on Friday morning.

“There is one (elephant) that died on Friday. It was shot. It was still alive on Friday morning, then it collapsed and died. This elephant must have been shot like on Monday. Actually, it ended up dying because it could no longer eat and drink,” Sunday told our correspondent.

When asked how many animals were shot, he responded “Look, others may have been shot, but they did not die. It is only one elephant that died. It is a male and around ten years old.”

Gov’t blamed over death of animals

Sunday said the government must also take responsibility for the death of the elephant as its failure to declare the elephants’ habitat a sanctuary meant the animals remain unprotected.

“I am very angry. It’s all the fault of the Ogun State Government. The government should have declared the area an elephant sanctuary where there is no hunting, no logging. But they have been taking their time like they don’t care.

“The elephants are critically endangered. That’s the last step before extinction. Even to double the population, it can take like 50 years. Elephants are not like rabbits,” he said.

Sunday said residents of the communities around the forest might have to contend with fears of reprisal from the herd which he said may become aggressive following the killing of the young bull.

Following the death of the elephant, the police in the area are reported to have launched a manhunt for the killers.

The Forestry Law of Ogun State 2006 prohibits the killing of elephants, pangolins and other endangered species in the state.

In 2013, the government arrested eight persons for allegedly killing an elephant in the reserve. The poachers had planned to sell the elephant’s tusk, which is also illegal.

Concerning the recent killing, the State Commissioner for Forestry, Tunji Akinosi said the elephant was shot with a “hunter-like Dane gun.”

Not everyone agrees the animal was killed with the Chairman of Ijebu East Local Government, where the incident occurred is one of them.

“For it not to be touched, people had marked it with a palm frond. If it was intentionally killed, it would have been butchered,” he said.

Commissioner Akinosi, however, vowed the government would go after those responsible for the elephant’s death, arrest and punish them to serve as a deterrent to others.

“It is true that we found one of our elephants shot two days ago. We have launched an investigation into it. It was shot with a Dane gun, the hunter-like gun. That’s what we are investigating. The authorities have been informed and they will launch a manhunt for the hunter that could have shot the elephants.

He however denies that three other elephants have suffered similar fates in the last few years in the state.

“In the last two years, no elephant has been killed anywhere in the state. None. Only about six months ago, one was giving birth, gave birth to three and one of it died. So, that’s not to say they have killed an elephant. That’s sensational,” he said.

“My brother, any expert that told you that only lied and wanted to take fame where they do not have any. It was the ministry that invited people, the so-called knowledgeable people in forestry and wildlife service to tell them what our thinking was, and they bought into it.

“So, that is what we have. It was not their thought but that of the ministry,” Akinosi said.

While the dust is yet to settle, a piece of cheeful news emerged of the rescue of three pangolins, another endangered species, by a group dedicated to the protection and preservation of pangolins in Nigeria.

The Chairman of the Pangolin Conservation Guild of Nigeria (PCWGN), Prof. Olajumoke Morenikeji in a statement made available to Daily Trust, said the three pangolins were rescued from Ondo and Ogun states.

“This time we released three pangolins; a mother and baby pair rescued from a restaurant in Ondo state and Rocky, our active friend from Abeokuta, Ogun State,” she said.

“They were all released into a protected forest area where they will be able to roam free and have a great life on the 21st of April, 2021.

The professor said the illegal wildlife trade is one of the major threats to biodiversity globally and has especially resulted in the near extinction of all species of pangolins found in Africa.

“Over the past five years, there has been an increase in the demand for pangolins from the international markets despite the ban in its trade. This has led to an increase in poaching incidents and subsequently, the seizures of pangolin parts,” she said.

While the three pangolins are lucky to escape with their lives, many hope that the death of the young elephant would mean more deliberate measures being taken to protect the endangered wildlife in the country.