Flour mills controlled by foreigners in Nigeria are exploiting local farmers and bakers through the arbitrary increase of prices of the commodity, which is also… 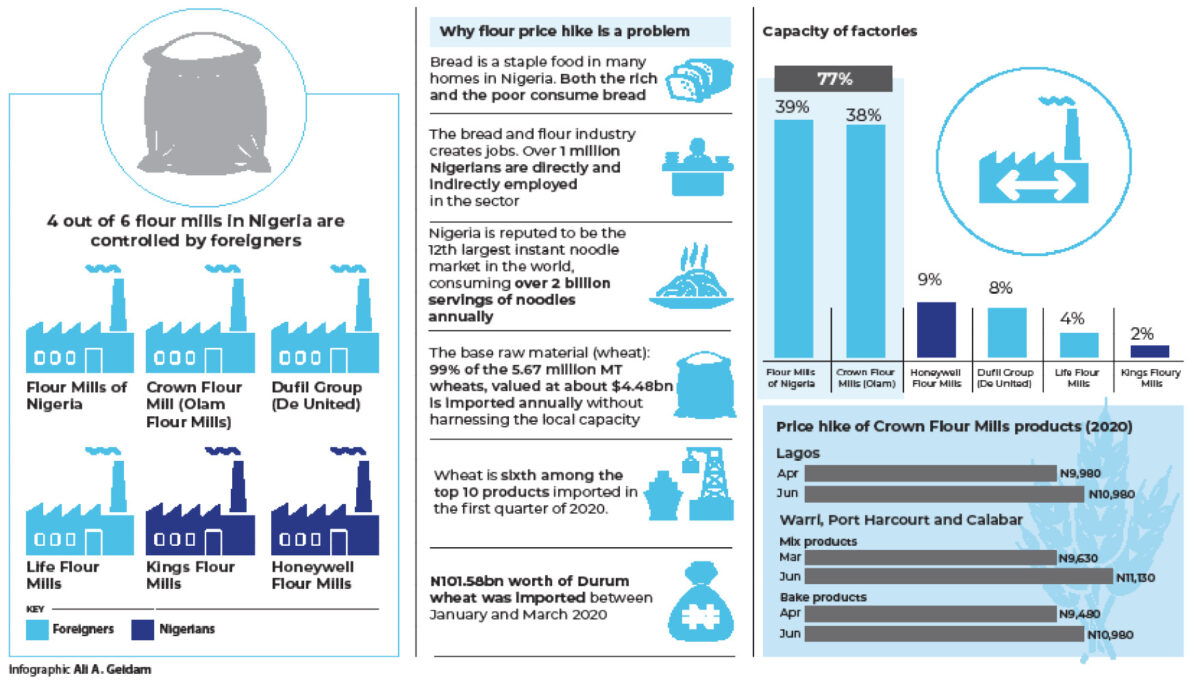 Flour mills controlled by foreigners in Nigeria are exploiting local farmers and bakers through the arbitrary increase of prices of the commodity, which is also affecting the purchasing power of consumers, investigation by Daily Trust revealed.

It was gathered from sources in the flour milling industry that top foreign companies in the industry are taking advantage of their financial muscle to exploit wheat farmers and suppliers.

Farmers and bakers who rely on flour and associated products for their production described the “coordinated and arbitrary increase of prices as exploitative.”

Documents seen by the Daily Trust showed that leading flour producing companies are controlled by foreigners even as they collectively operate like a cartel, manipulating the market forces and increasing prices at will.

There is no room for local bakers and pastry producers to have a say before the prices of flour and associated products are hiked, findings by the Daily Trust revealed.

Why flour price hike is a problem

Of recent, the prices of pastries, bread, and other products being produced with flour are on the increase, with many Nigerians complaining of hike in staple food.  The increase is not limited to flour for making bread as it affects all related products such as semolina, pasta, and wheat offal. For instance, our correspondent in Maiduguri reported shortage of bread in the state capital yesterday.

This happened as a result of the strike action embarked upon by the bread bakers union on Thursday. The bakers were reportedly unhappy about the uncontrolled increase in the prices of wheat flour and other ingredients used in bread baking.

A resident who pleaded for anonymity said loaves of bread are no longer available for sale.

The Manager of My Lady’s Bakery, Baga Road, Matthew Clement, said the union met and asked its members to down tools on Thursday because the price of bread had “remained constant at N400” while prices of wheat flour and other ingredients continued to increase.

However, bread price has risen in Kano and Abuja, a situation the association of bakery owners attributed to the increased price of flour and other ingredients.

Daily Trust reports that the increase began on Saturday and has affected bakeries in the state.

Secretary of the association in Kano, Kabiru Hassan Abdullahi, said they had no other alternative than to increase the price to reflect the market reality.

“It is true that we have increased the price and it took effect on Saturday. The truth is, we are into the business to make profit, and recently, there has been an increase of almost N4, 000 in the price of a bag of flour,” Abdullahi confirmed.

Bread is a staple in many homes in Nigeria. In fact, it is easily accessible to other kinds of food. Both the rich and the poor consume bread, and it comes in various sizes, shapes, compositions, and price tags to meet the needs of different categories of consumers.

The bread and flour industry creates jobs – those directly employed by the industry, armies of bread distributors, sellers and hawkers all over the streets.

Reports showed that Nigeria is reputed to be the 12th largest instant noodle market in the world with a consumption of over 2 billion servings of noodles annually. However, this paper found that this multi-billion dollar market is controlled mostly by Indians with Indomie noodles, produced by Dufil, accounting for nearly 70 percent of the local noodles market.

The base raw material for bread flour, confectionery flour and noodle flour, semolina, and pasta production is wheat, and 99 percent of the 5.67 million metric tons valued at about $4.48 billion is imported annually without harnessing the local capacity, findings have shown.

According to statistics from the National Bureau of Statistics (NBS), wheat was sixth among the top 10 products imported in the first quarter of 2020. While the local farmers said there was capacity to grow enough to supply the flour millers in Nigeria, the data showed that N101.58 billion worth of Durum wheat was imported between January and March 2020.

A document obtained from authorities in the flour milling industry showed that six-core flour millers in Nigeria have 30,032 metric tons capacity of factories in the country.

It was learnt that Olam acquired three flour companies to become the second biggest flour miller in Nigeria. The firms it acquired are the Crown Flour Mill (CFM) from a Lebanese family of Chief Maan Lababidi in 2010, BUA Flour Mill from industrialist, Abdussamad Isiyaka Rabiu in 2015, and Dangote Flour Mills in 2019.

Honeywell Flour Mill, which is the only firm with full Nigerian management only occupies nine percent of the local flour milling capacity with a metric ton of 2,600.

Dufil Group, which is run by Indians occupies 8 percent of flour millers’ capacity (but its Indomie noodle brand is about 70 percent of the noodles market). Life Flour Mill, a foreign firm occupies 4 percent while Kings Floury Mill occupies two percent.

Different tales in other climes

While Nigeria is dominated by the foreign flour mills with attendant arbitrary hikes in the price of what they produce, the case is different in Ghana where the government regulates the terrain in order to protect the local market.

It was learnt that Olam (CFM) has a flour mill in Tema, Ghana, but the government resisted the move by the conglomerate to dominate the market.

In Nigeria, such companies have continued to increase the prices of their products even at the time of difficulties.

For instance, from the outset of the COVID-19 pandemic, CFM had between May and June 2020, increased the prices of bread flour, Semolina, pasta and allied products at different times.

They attributed the hike to the rise in foreign exchange (forex) from N360/$1 to over N400. However, although the forex increase is less than 10 percent difference, comparative analysis of the hike in flour and pasta showed that it increased by over 19 percent especially for products from CFM. The price review schedule obtained for CFM in Lagos shows that flour product price rose from N9, 980 in April to N10,980 in June 2020, representing N1,790 increase (19.5%). For CFM’s product price in Warri, Port Harcourt and Calabar, the price hike was from 19.2 percent to 19.5 percent. For instance, its mix and bake products rose from N9,630 in March to N11,130 in June; and N9,480 in March to N10,980 in June, which is a 19.5% hike.

Bakers in Nigeria have confirmed the price hike by largely foreign-dominated flour millers, saying the development was threatening the local industry.

Efforts to get the Association of Master Bakers and Caterers of Nigeria (AMBCN) to speak on the matter were not successful. However, the Premium Bakers Association of Nigeria (PBAN) confirmed that since March 2020, there had been an increase of N3, 000 on a bag of flour just like other ingredients like sugar, butter and margarine.

The Public and Industrial Relations Officer of the association, Engr. Onuorah Emmanuel, told Daily Trust that if the bakers had been “inconsiderate” like the millers, many people would not be able to afford a loaf of bread.

“Beginning from March, they have added N3, 000 to a bag of flour and sugar. Almost N6, 000 has been added to the price of butter and margarine.

Repeated efforts to get the reaction of the Olam Flour Mill yielded no result up till the time of filing this report.

When contacted, Olam’s Vice President, Corporate & Government Relations, Ade Adefeko, promised to get back to one of our reporters on the matter but failed to do so several days after. Reminder messages sent to him via WhatsApp were also not responded to.

It was a similar situation with Crown Flour Mills Ltd. A visit to its office at Tin Can Island Port, 2nd Gate, Behind Berth 1, Apapa, to get the reaction of the company did not yield results as our reporter was prevented from gaining access into the compound on the grounds that he needed a prior appointment to do so. It was the same story at Honeywell Flour Mill Limited located at Apapa in Lagos. The security operatives demanded an appointment confirmation to see any official and that without that, there will be no official dealing with our correspondent, though they were informed that it was a media enquiry.

Equally, efforts to get a direct response on this issue from the Flour Mills Nigeria Limited (FMN) did not yield results. A visit to FMN corporate headquarters at 1 Golden Penny Place, Wharf Road, Apapa, was also unsuccessful. The security personnel said the staff members take turns to come to the office and the person who could respond to our enquiries was not on seat.

However, the Head, Corporate Communications, Samuel Ibiroma, responded to our email enquiry, directing it from the Floor Milling Association of Nigeria (FMAN). In the response from FMAN, the Executive Secretary, Alhaji Olalekan Saliu confirmed the increase in the price of flour but said that was not peculiar to flour millers.

“The volatile nature of the forex market had sadly produced a devastating impact on the manufacturing industry like several other sectors of the Nigerian economy,” he said,” he said. Responding to the allegation that flour millers do not treat wheat farmers fairly, he said it was false and misleading.

“The relationship became stronger from 2016 when leaders of the two sides met at the offices of the Federal Ministry of Agriculture and Rural Development, Abuja and engaged in a series of deliberations to work out a Memorandum of Understanding (MoU) which was jointly agreed and signed on June 7, 2016.”

He said the highlights of the MoU included the firm undertaking (a guarantee) given by FMAN to off-take every grain of wheat produced by Nigerian wheat farmers as long as the grains met the specified parameters set out in the MoU.

Saliu said representatives of FMAN and WFAN met in Abuja on March 12, 2020 to review and revise the MoU, and to agree on the price for the current year.

“The revised MoU was jointly signed and dated by the leaders of FMAN and WFAN. The two parties agreed on a price of N170, 000 per metric ton delivered to Kano (30% increase over last year). Due to the paucity of the last harvests (March/April 2020), prices had risen over and above the agreed price.

“Between June and July 2020, FMAN’s aggregators visited prominent wheat markets, villages and towns in search of wheat to buy. They discovered that selling prices of wheat climbed up rapidly over and above the agreed N170, 000 per metric ton to N180, 000, then to N185, 000. The aggregators continued to buy Nigerian wheat for FMAN until prices reached N200, 000 per metric ton. The upward trend continued. Presently, prices are in the region of N230, 000/N240, 000 per metric ton,” he said.

The Federal Competition and Consumer Protection Commission (FCCPC) confirmed that it was aware of the price rage in the flour industry and that it is probing these coordinated price increases in bread and flour.

In response to Daily Trust’s inquiry on the rising cost of flour, bread and other pastries, the Director-General/Chief Executive Officer of the FCCPC, Barrister Babatunde Irukera said the commission became aware of a proposed 60 percent increase in the price of bread by a coordinated action of the bakers association.

He revealed that the FCCPC had met with the master bakers association to emphasize how the law prohibits competitors from coordinating in setting or changing prices.