With over two million Nigerians displaced and more than 600 killed by floods, more people risk economic hardship as the situation bites harder in the… 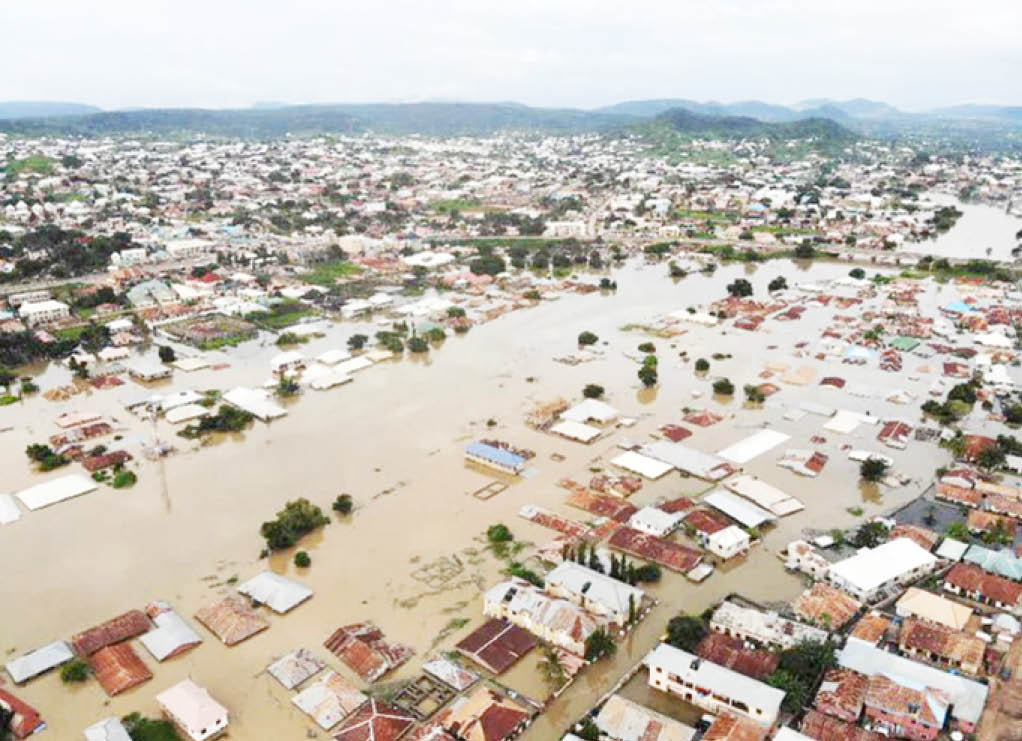 With over two million Nigerians displaced and more than 600 killed by floods, more people risk economic hardship as the situation bites harder in the country. Haulage services have been severely affected due to inaccessible roads, leaving millions of business owners at risk. This report captures the plight of Nigerians who depend on goods supply chain in the country for their livelihood.

Findings by our correspondent in Lagos, Ogun and other southwestern states revealed that prices of some food items have increased as a result of disruption in the supply chain occasioned by recent floods across the country.

Economy: How Nigeria became a laggard among peers

Flood victims must not be abandoned

In addition, it was learnt that many rice farmers lost their farms due to the floods and could not meet up with the expected supply.

A check at some markets in Lagos revealed that tomato, maize, rice and some grains are affected as the number of trucks coming to the state was reduced.

Umaru Usman, who offloads trucks at Kara market along the Lagos-Ibadan expressway, said many trucks could not come to Lagos because of the flood situation.

He said fewer trucks carrying tomatoes now entered Lagos from the northern part of the country.

“Everything here now is costly. Tomatoes are not coming as they used to be. At Kara here, many of the trucks we were expecting could not really come since the flood started. The flood is not only affecting the North, even here, we are facing the challenges.”

The Managing Director of the Seyi Oduntan Farms Limited, Gbemi Oduntan, confirmed that many rice farmers were affected by flood, warning that this could result in nationwide food insecurity.

In a chat with our correspondent, she said that while flood wasn’t as pronounced in Lagos as it was in other parts of the country, food supply has been greatly impacted.

She said, “A lot of rice farmers have lost all their farms because it happened at a time they were about to harvest.

“Everybody is aware that there is a lot of flooding and we know it is going to affect food security.”

Daily Trust on Sunday reports that to cushion the effect of the flood disaster and the impending food insecurity in Lagos, the federal government delivered some grains to the Lagos State Government, which include 160 MT of maize, 141.4 MT of sorghum and 64.2 MT of garri.

This is just as the government said no fewer than 4,885 households were affected by the recent flooding in Ogun.

The Director–General of NEMA, Alhaji Mustapha Ahmed, disclosed this in Abeokuta during the presentation of relief materials to the state government for distribution to flood victims.

“The result of the assessment indicated that 4,885 households were affected by the flood,” he said.

Residents of Port Harcourt and its environs are finding it difficult to get food supply from rural communities of Rivers State, which is noted for rich agricultural yield.

Many of the residents who were affected by the flood in the old Orashi region, which comprised Ahoada West, Ahoada East, Ogba/Egbema/Ndoni and Abua Odua, have been quartered in four displaced persons camps created by the local government in Akinima, Mbiama, Ubeta and Okogbe, while others who could not be accommodated in the camps relocated to neighbouring communities, where they are taking shelter with friends and relatives.

This is not the first time the affected communities were displaced by flood. Rampaging floods have become a recurring incident in four local government areas of Orashi tributaries. Between 2012 and 2022, over 300 communities have been displaced by flood while properties and farmlands worth millions of naira were destroyed.

The four local government areas affected by the flood, our correspondent learnt, are noted for their rich farm produce. Majority of the residents are predominantly farmers. The affected four local government councils are known as the food basket of Rivers State as farm produce such as cassava, plantain, yam, vegetables and fruits are harvested in large quantities from the area.

Some of the farmers from Orashi region that transport their agricultural produce to Port Harcourt are counting their losses as the rampaging floods have made it difficult to move their produce.

Emmanuel Ahiakwo, a farmer from Ahoada, said he lost his business partners in Port Harcourt and its environs because of flood.

“I am a big time farmer based in Ahoada. We cultivate yam, cassava, maize, plantain in large quantities and supply to Port Harcourt and other neighbouring communities. Many farmers were forced out of business because of the rampaging flood.

“I lost over 10 hectares of farmland to flooding and this adversely affected food supplies to Port Harcourt and other neighbouring communities in the state,” he said.

Another farmer from the area, Beatrice Okadike, said she could not harvest her plantain and pineapple produce, which she supplied to her customers in Port Harcourt.

“It’s a very bad time for commercial farmers like us who are into big time farming. I have a very big pineapple and plantain farm, which I supply to my customers in Port Harcourt. Our farm was destroyed by flood and this affected our businesses. The supply chain has been lost and we are finding it very difficult to cope with the situation,” she said.

For dealers of food items that get their supplies from the northern part of the country, the rampaging floods equally affected their businesses.

John Adama, a tomato dealer in Ahoada, said the rampaging floods in the northern part of the country affected the cost of food items.

“The major challenge we have is getting food supplies from the flood- ravaged communities from the North. The entire Orashi region was flooded and this affected the supply chain. No truck is coming to this area because of the road, which has been taken over by flood. Our goods are trapped in Port Harcourt. This is really affecting our business,” he said.

A cattle dealer in Ahoada, Adamu Musa, said it’s difficult to transport cattle to the Orashi area because of flood.

“Trucks no longer come here. We are presently out of business because the supply chain has been disrupted by flood. We no longer get supplies, and this has created food crisis in flood-prone communities,” he said.

Our correspondent learnt that the disruption in the supply chain has affected the cost of food items. A market survey showed that the prices of food items, such as garri, yam, maize and tomatoes have increased by almost 100 per cent.

In Kano State, it was gathered that a lot of businesses have been affected by floods. The petroleum supply sector is the most affected business as trucks spent up to two weeks before arriving in the state. Many fuel stations have closed down, while those dispensing were doing so halfway with an increase in the price of the commodity.

The Chief Executive Officer of the A.A Girgi Petroleum Company said his company trucks were held for more than 13 days, adding that in the process, the company incurred additional expenditure, which makes it necessary to increase the price of the commodity.

“The delay in the arrival of the commodity has affected its availability, and by extension, the price has also increased. I have trucks that were being held up for 13 days,” he said.

However, at the Dawanau International Grain Market, the story is different as traders adopted another pattern to get their wares transported to the South.

Alhaji Abubakar Danliti said, “Our trucks now follow through Niger Republic to Benin Republic and enter Lagos through the Seme border. It is very far but we do not have an option. We can’t allow them to follow the usual routes now because it is dangerous and takes longer than necessary. However, the price of the commodity has been seriously affected as it has increased by about 300 per cent.”

Also, Isah Bello Gadan, a truck driver with one of the leading petroleum marketers, said he had spent over 15 days on the road due to the holdup caused by the flood. He said the situation was highly disturbing as everyday was incurring additional expenses.

“The fuel consumption of our trucks has increased, so also the allowances of the drivers for the additional days we spent. As such, the supply of the commodity is being affected and the price has gone up,” he revealed.

Geographically, Jos, the Plateau State capital, is a transit camp to most trucks conveying goods from the North to and from other parts of the country. So the city plays a crucial role in the distribution chain across the northern region.

One of the oldest manufacturing companies in northern Nigeria, Nasco Group, is a victim of flooding, especially in Lokoja, the Kogi State capital.

Dail Trust on Sunday learnt that two trucks with goods from the company in Jos heading towards South South were trapped in Koton Karfe, near Lokoja. A distributor, Alhaji Umaru Rabo told our correspondent in Jos that he rented the truck to deliver the goods in Port Harcourt within one week and return to Jos. “But the truck got stuck in Kogi State and spent three weeks there. The truck just left Lokoja yesterday after the recession of the flood,” he said.

A truck driver who works in a Vita Foam company in Jos, Kawu Meriga  said, “I normally load foams and mattresses from Jos here to Maiduguri and connect to Niger. But for the last one month, I could not travel in the truck because of flooding in some of the states we pass, especially Gombe and Jigawa. Meanwhile, our customers keep calling us from Niger and we had to explain to them the situation on the road.”

Another trader who supplies pepper and onions from Gombe, en route Jos to the East, Julius Anayo, told Daily Trust on Sunday in Jos that he loaded a truck of pepper and onions to take to the East but was forced to sell them in Jos because of the news about flooding on the road, especially in Lokoja”

Similarly, an agent of Dangote cement with a warehouse in Jos, Alhaji Yunus Balarebe said,” The goods for which I placed an order from Kogi State were held in Lokoja by flood. While waiting for the flood to reduce, we heard that the state government had problems with Dangote, so the driver had to abandon the truck and run for his life in Lokoja. The goods and the truck are safe, but I cannot have them up till now.”