Food dealers: Northerners, Southerners Suffered But We Achieved Our Aim

The Cattle and foodstuff dealers under the auspices of the Amalgamated Union of Foodstuffs and Cattle Dealers in Nigeria (AUFCDN), on Wednesday said the aim… 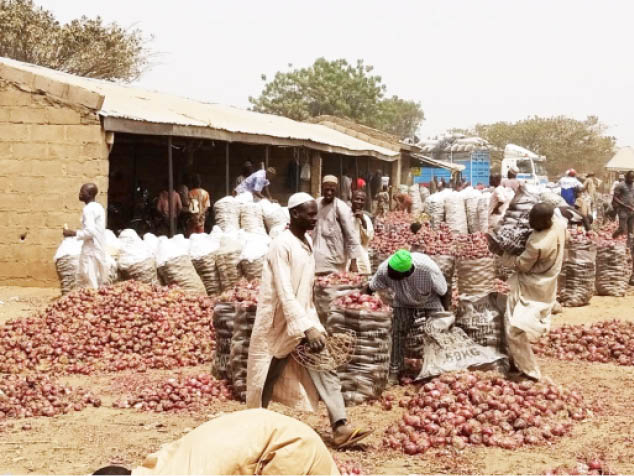 Marketers package onions with the hope the impasse between the union and government would soon be resolved Photo: Clement A. Oloyede

The Cattle and foodstuff dealers under the auspices of the Amalgamated Union of Foodstuffs and Cattle Dealers in Nigeria (AUFCDN), on Wednesday said the aim of the strike it embarked upon was achieved.

Addressing journalists after a reconciliatory meeting at the Kogi State governor’s lodge in Abuja, President of AUFCDN, Muhammed Tahir, said the leadership of the union had directed aggrieved members to allow peace in the country.

He said the government, represented by Kogi State governor, Yahaya Bello, reached an agreement with them to ensure protection of their members, stop all forms of multiple taxation and intimidation from security officials on the highways.

“All the stakeholders and members of AUFCDN in our nationwide strike are glad we achieved what we wanted to achieve. Since the Governor of Kogi state, Yahaya Bello begged us on behalf of the Federal Government of Nigeria, we agreed to call off the nationwide strike today.

Government will compensate us

“They agreed to pay the compensation and call off any multiple taxation on federal highway and allow us to engage in our business activities peacefully nationwide,” Tahir said.

Speaking on the 6-day strike action, Bello lamented that it was unfortunate that both Southerners and Northerners incurred many losses, stressing that the collateral damage recorded nationwide during the few days of the strike was enormous and should not be allowed to multiply.

He said, “We must make life simple for ourselves; since we embarked in this action, there has been a lot of hardship on Nigerians across the board. Not only in the South or West where foodstuffs have increased by 100 percent and there is no meat, no food stuff and the few available are getting dry in the South.

“The North was not spared from the effects of the strike as perishable goods were getting spoilt, and both farmers and truck drivers were unable to carry out business that would enable them generate the needed finances to meet their daily needs.

“While your trucks are parked, there is corrosion because they are not moving and you will have to service them before you can put them to use. Perishable goods such as; onions, tomatoes, vegetables, pepper and others are getting spoiled, the farmers are not getting money to return back to the farms and take care of their daily needs so both sides are suffering because even if they have enough foodstuffs, they still need money for other necessities.

Our union members will resume work

“To this end, I appeal to the aggrieved union to immediately call off the strike and allow movement of foodstuffs and cattle to all parts of the country, especially the North and Southern parts, with the assurance no Hausa-Fulani or members of the union would be maltreated, harassed or killed.”

A former minister of Aviation, Femi Fani-Kayode who was in attendance, said the impact of the strike was too heavy to ignore, adding that the killing of any Hausa-Fulani or traders engaged in legal business activities would no longer be tolerated.

“On behalf of the so many people in the South-West, especially Sunday Igboho, our commitment to you today, is that people of the Hausa-Fulani extraction cannot and will not be attacked in the South. It is unacceptable and he (Sunday Igboho) will be one of those to welcome you when you re-enter the South to escort you all.

“I want to appeal to the Federal Government and all concerned to join hands and stop the criminals that attack our people. It is not our way of life and thank you for not visiting our wrath on innocent people, we will not tolerate the killings of Hausa-Fulani people, we will not accept it,” he said.