Asides the disruption of transportation and food supply, the recent flooding also had a major effect on education. With schools submerged by the flood, many… 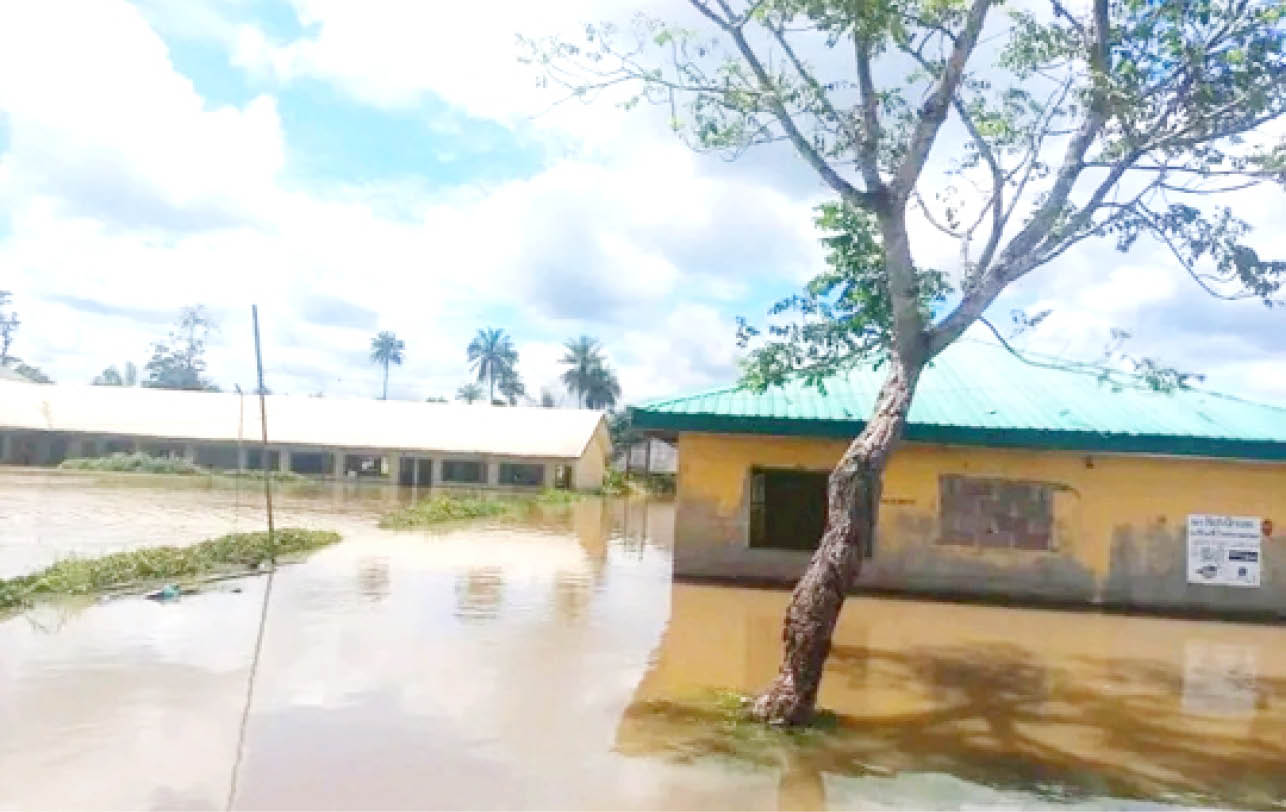 Asides the disruption of transportation and food supply, the recent flooding also had a major effect on education. With schools submerged by the flood, many pupils and students were left stranded. Daily trust Saturday reports.

Daily Trust Saturday reports that many of the flood victims have relocated to safer places with their children, and as a result, they no longer go to school.

However, the Delta State Government, led by Governor Ifeanyi Okowa, has established makeshift schools in most of the displaced persons camps across the state. It is based on this fact that the commissioner for information in the state, Mr Charles Aniagwu, insisted that displaced children still attended school despite the effect of the flood.

Aniagwu said the state government was determined to avoid a distortion of the academic calendar; hence it established learning centres in the displaced persons camps.

“We made sure that teachers go to the camps to teach. In some other places, we did what we call the Merger School System. We also asked them to join some of their colleagues in other schools that were not affected,” he said.

Aniagwu also noted that the state government put medical camps in place to cater for the health needs of the affected victims.

The Bayelsa State Government, on October 3, shut down schools across the state so that pupils and students would not drown in the rampaging floodwater as it happened in previous years.

Daily Trust Saturday reports that the flood disaster has altered the academic calendar of different secondary and primary schools in the state.

Announcing the state government’s directive, the Director of Planning, Research and Statistics in the state Ministry of Education, Agala Damini, in a statement, noted that the action was part of the flood break introduced to the academic calendar in the state to protect school children.

“The directive became necessary to safeguard the lives of teachers, students and pupils, as floodwater begins to submerge some parts of the state,” the statement noted.

Also, despite that the strike action by the Academic Staff Union of Universities (ASUU) was called off, tertiary institutions in the state could not resume academic activities due to the rampaging flood.

As a result of this development, the Federal University, Otuoke and Niger Delta University, Amossoma, introduced online lectures for its students while the flood lasted.

The registrar of the Federal University, Otuoke, Mr Yousou Donald Iruo, in an internal memo seen by Daily Trust Saturday, noted that the Senate of the institution, at its 80th emergency meeting, considered the flood situation in the state and the scheduled resumption of the 2020/2021 academic session; hence the decision to introduce online lectures for students.

He said, “Lecturers are directed to commence an online interface with students via zoom for completion of the remaining lectures, projects supervision and revision, pending the approved week for physical interaction and continuous assessment.”

Similarly, the management of the Bayelsa State-owned Niger Delta University (NDU), Amassoma, introduced online lectures for medical students in the 400, 500 and 600 levels due to the flooding in the state that hindered normal resumption.

Commenting on the impact of flooding in the schools, the secretary, Nigeria Union of Teachers (NUT) in Bayelsa State, Comrade Johnson Hector, said it altered the school calendar and affected students preparing for final examinations.

He, however, commended the state government for always declaring flood holidays at the peak of the rainy season to save children from the dangers associated with flooding.

Our correspondent reports that pupils and students in all the primary and secondary schools in the area were evacuated to government- designated displaced persons camps and academic activities suspended.

The displaced residents and many of their children, who were supposed to be in schools, are taking shelter in the displaced persons camps with their parents and other relatives.

Some of the parents of the displaced students who spoke with our correspondent said all the schools in the affected areas were overtaken by flood.

A resident of the area, Monica Eke said she was in the camp with all her children.

“All we want is how to settle down and recover from the devastation caused by the flood. Nobody among us is talking about school because there is no school for now. The entire schools in the areas have been taken over by flood. Many of the students and pupils are now in the camp. That is the situation for now,” she said.

A leader of a nongovernmental organisation in the area, Peter Obi, said over 50 primary and secondary schools were affected by flood.

He said his organisation was making efforts to see how they could go to displaced persons camps to teach students who are taking shelter there.

Our correspondent could not get an official reaction from the Rivers State Ministry of Education on the matter.

On its part, the Anambra State Government ordered the immediate closure of primary and secondary schools in areas ravaged by flood. The action is expected to affect no fewer than 12 out of the 21 local government areas of the state that have been designated as flood-prone areas.