From Tijani Labaran (Lokoja) & Ali R. Ali (Dutse) Motorists and other road users had a hectic moment on the Lokoja-Abuja highway on Monday as… 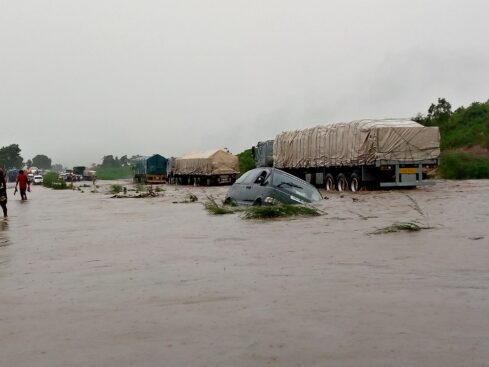 Motorists and other road users had a hectic moment on the Lokoja-Abuja highway on Monday as flood took over the road around the new bridge being constructed before Koton-Karfe town, making it almost impassable.

In the melee that ensued, commuters were held up for several hours, resulting in heavy traffic buildup along the Lokoja- Koton-karfe road axis for hours.

Two articulated vehicles were said to have gotten stuck on the flooded part of the highway.

Daily Trust reports that there was no alternative route for vehicles to move out of the traffic gridlock.

Travellers were held up at the spot for hours and commercial activities came to standstill in most markets in Lokoja and other areas.

Traders could not go to the markets from the area on Monday due to the flood challenge.

A driver, Malam Ahmadu, who claimed to have spent hours at the flooded place, said there was apprehension among commuters that the flood level might increase to a point that would make it difficult for motorists to pull through.

Daily Trust gathered that policemen, soldiers, FRSC and vigilante personnel as well as youth volunteers were drafted to the scene to enforce orderliness.

However, an eyewitness said the gridlock at Murtala Muhammadu Bridge in the Jamata Community might take a longer period to clear as motorists out of impatience took over all the lanes of the highway.

One of the community’s spokespersons, Malam Ibrahim Musa Gamayin, said several houses were destroyed by the flood, which forced residents to flee the area.

He said no loss of life was recorded but properties worth millions of naira, including several farms were washed away.

Reacting to the incident, the state deputy governor, Alhaji Umar Namadi, sympathised with the victims and assured them of the government’s intervention.