In Benue State, many residents of flood-ravaged areas have expressed fears of contracting communicable diseases eventually when they return to their homes. A mother of… 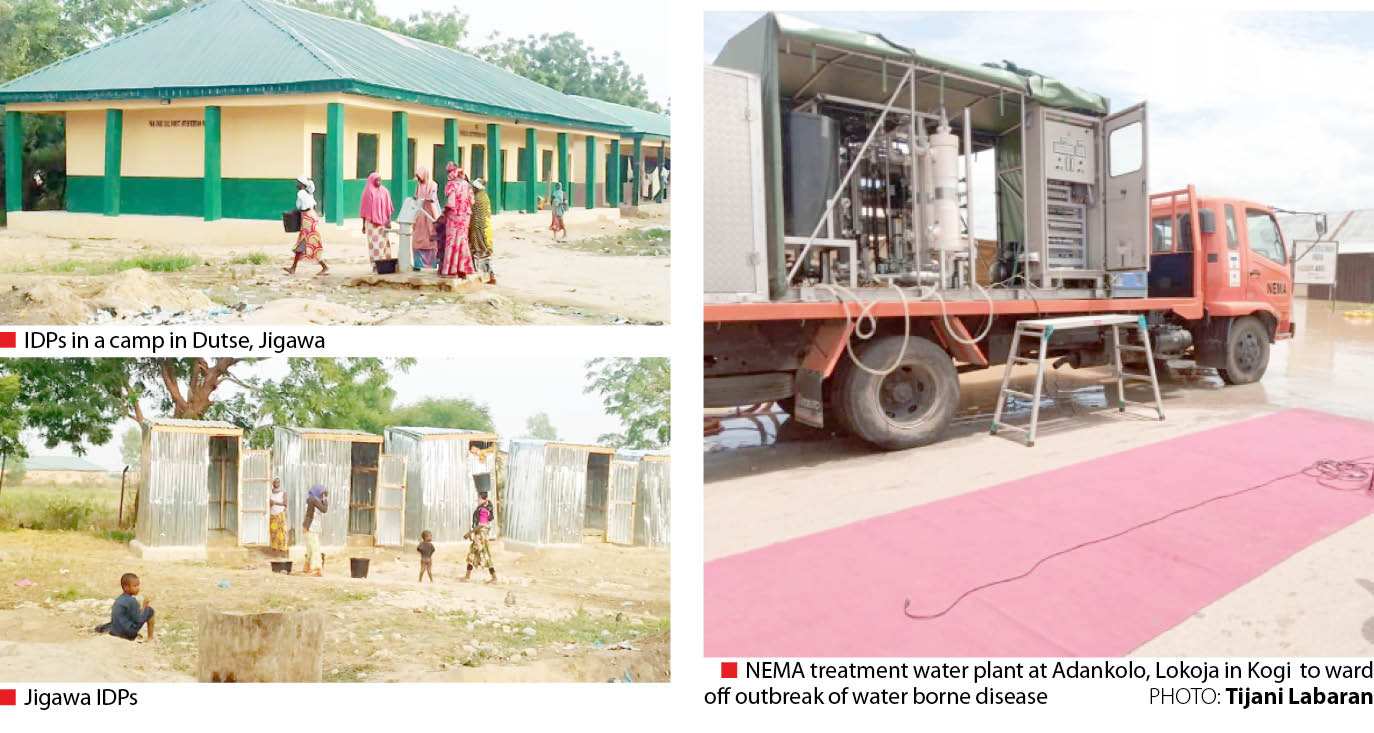 In Benue State, many residents of flood-ravaged areas have expressed fears of contracting communicable diseases eventually when they return to their homes.

A mother of four children, Helen Keytor, said that her affected home situated in the Wadata area of Makurdi must be fumigated against reptiles and the environment rid of diseases.

“If that is not done, there are possibilities of us contracting diseases such as cholera because the entire environment is littered with filth brought in by the flood.

“For now, these insects that bite are what is disturbing us and leaving our bodies with rashes,” Keytor said.

Apart from this woman, there are concerns among affected residents that there could be an outbreak of cholera following their inability to access clean drinking water.

But, the Executive Secretary of the Benue State Emergency Management Agency (SEMA), Emmanuel Shior, had earlier intimated that NEMA deployed its water purification truck in prompt response to purify polluted water and distributed same to affected communities in Benue State.

Meanwhile, the State Epidemiologist, Dr Sam Ngishe, told our correspondent on the telephone that all hands are on deck to deal with any eventuality if an outbreak of cholera occurs.

Ngishe said, “We are yet to get the full data scientifically but we expect that with the flood, malaria cases will definitely be on the rise and we may also have cases of gastroenteritis and vomiting issues.

“We are also anticipating that because of the flood and the way the waterways were flooded, there’s the possibility of an outbreak of cholera, so we are actually looking out for that with all our surveillance systems.

“But, we don’t have any reported cases as we speak. Our surveillance system is actually on alert and we are waiting to hear of cases and to deploy our team if need be.”

Daily Trust noted that besides the loss of properties and lives due to boat mishaps and its likes, the fear of water-borne diseases is raising concerns in most communities ravaged by the flooding.

According to Hon. David Ogwu, the former local government chairman of Ibaji council, waterborne disease is bound to affect Ibaji communities if proactive measures are not taken now because almost all the settlements are sitting on stagnated water presently.

He said all the communities in the council have been submerged, noting that the immune system of some people may soon collapse to toxins present in the polluted environment.

“The immune system of the children, old and weak will soon collapse to the toxins being emitted by the stagnated water. It emits smelling, repulsive and toxic gaseous odour that is injurious to health. Water borne disease is bound to come,” he said.

He added, that many in the flooded Ibaji land presently have rashes all over their body, resulting from insect bites.

Also, Alhaji Hussein Ahmed from Mozum in Bassa Local Government Area of the state who said the only means of having drinking water in their community was the application of alum to purify hard flood water.

He said the fear of imminent outbreak of cholera epidemic in the community made a community leader to source for alum from Lokoja, which he distributed to many households.

Despite this move, he said many people had complained of stomach disorder for wrong application of the alum.

He recounted the case of a family from Ibiroko who took refuge with their kinsmen in the high ground of Mozum community, who were rushed to a clinic due to over dose of alum in the water.

“We thank God, no life was lost in the process,” he said.

Daily Trust Saturday noted that in Lokoja, the Kogi State government, in conjunction with NEMA, drafted mobile water treatment plant to Adankolo and other areas at the peak of flooding to treat water for the affected communities.

A resident of Adankolo, Mr Shaibu Adams, said they were just boiling the hard flood water from the River Niger and filtered it locally to drink before NEMA came to their rescue.

Daily Trust Saturday noted that except the Internally Displaced Peoples (IDP) camp at Idah being piloted by a faith-based religion and that of Kotonkarfi, most of the camps lack the necessary facilities to handle the outbreak of water borne disease.

A flood victim at the St. Luke Primary School Adankolo, Aminat Salihu, said they lack adequate drinking water, beside the terrible unhygienic toilet facilities in the camp which is prone to worsen the spread of communicable disease.

“I must be sincere with you, this toilet cannot serve a family of eight, not to talk of over 400 refugees. The pressure on the small camp’s toilet is just too much, making the system to easily collapse intermittently.

“Above all, there’s inadequate water to observe the necessary procedure of clean up after its use, creating fear of an outbreak of epidemic.”

Buttressing the point of Mrs Salihu at Andakolo IDP, Dr Ozi Okonofua, the Lion Club’s District Committee Chairperson for Site Preservation and Awareness, expressed the club’s dissatisfaction with the humanitarian aspect of the camps visited by the members of the club in Kogi.

Dr Okonofua said there was no good sanitary condition in most camps visited in the state  where the club donated relief materials to the flood victims, saying, it could result in outbreak of diseases which will compound their woes.

He enjoined the government and individuals to look into the plight of the victims and find a lasting solution through collaborations to tackle the menace, saying “humanity is at stake here.”

The Lokoja IDP camp Coordinator, Aliyi Adoga, of the State Emergency Managing Authority (SEMA) who said over 390 flood victims are in the camp, noted that the place has not recorded any form of disease or death since the inception of the camp.

He stated that facilities at the camp are being constantly improved by concerned members of the public who have been trooping into the camps with relief materials to support the upkeep of the flood victims and ward off any form of disease in the camp.

“We’ve been receiving various food items, medical assistant and clothing, which have strengthened members of the camp,” he said.

Equally, Rev (Dr) Anthony Ademu Adaji of Catholic Diocese of Idah has put a structure as refuge camp at Idah, fit with enough food and medical facilities to cater for over 4,000 flood victims from Ibaji land.

In Jigawa State, people of Karnaya and parts of Hadejia IDP camps, who suffered most from the flood are lamenting the lack of adequate hygiene materials and potable drinking water.

Gandun Sarki Camp in Hadejia local government is a primary school building where the IDPs and the students share the classes, yet only one source of water is constructed in the area.

Kaltume Isah, one of the residents of Gandun Sarki Camp lamented how their toilet is contaminated and unhygienic due to insufficient toilets in their camp.

She said the toilets are not washed properly by people after use probably due to so much pressure.

Another victim, Azimi of Ganuwar Kuka, said there is no cholera in their camp because they use borehole water for drinking and cooking.

Lali Soja of Kirikasamma, also a flood victim, said their concern is shelter because the government provides food and medicine in their camp, but they are not comfortable because the harmattan season is approaching.

Adamu Ahmad, the village head of Karnaya, said his people are experiencing minimal health challenges as no cholera case has been recorded, but noted that there is need for government to continue to provide hygienic items and construct toilets in their camp where they took shelter.

They took shelter in three building of the village’s primary school and two filling stations along Kano/Maiduguri Road where he said over 20 women delivered without visiting any hospital or health post as a result of the devastating flood.

Dr Salisu Mu’azu, the state commissioner for health, said the government is doing its best to control the outbreak of cholera in the camps and other communities affected by floods across the state.

He said last year, the state government and development partners vaccinated over 2 million people against Cholera which is the reason why the state didn’t record the outbreak despite the flood.

Mu’azu said only 12 cholera cases were found during the flood period out of 300 suspected cases reported in some of the flood-affected areas.

He, however, recalled that in 2021, Jigawa recorded thousands of cholera cases and many deaths, but as a result of the vaccination, the cases drastically reduced to only 12 and has been controlled without any casualty.

He said only three people died before reporting the case to the Hospital but it was discovered theirs was not related to cholera.

As a result of the flood, Dr Mu’azu said the state government has set up a committee that will assess all the problems that could be found in the flood-affected areas, including health-related matters.

He assured that his ministry will not relent in its efforts in controlling outbreaks of communicable and other diseases not only in the flood areas but the entire state.