The long drawn negotiation for the release of the abducted passengers of the Abuja-Kaduna AK9 train service is attributable to intriguing power play, shifty posture… 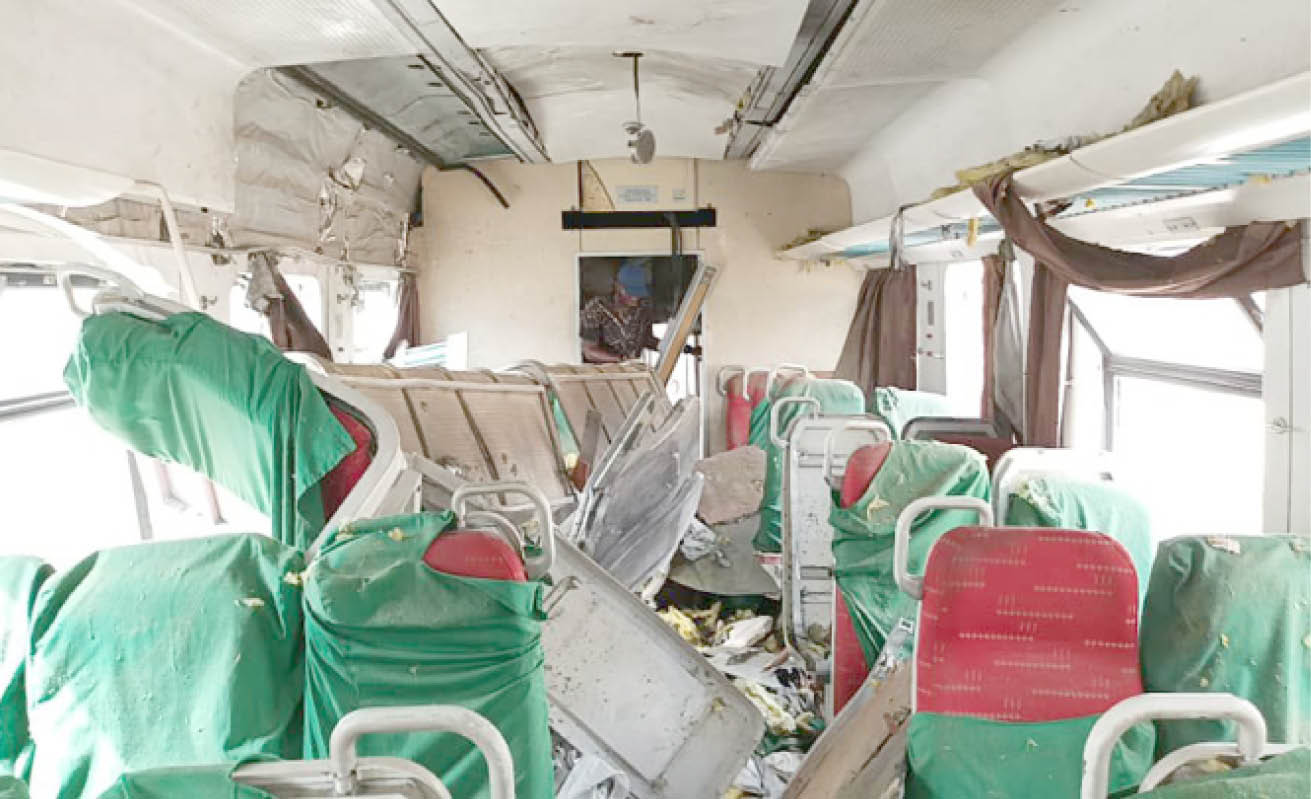 The long drawn negotiation for the release of the abducted passengers of the Abuja-Kaduna AK9 train service is attributable to intriguing power play, shifty posture of the abductors and multiplicity of efforts, Daily Trust on Sunday reports.

Nearly five months since the abduction of the dozens of passengers from the attacked train arriving Kaduna from Abuja, the fate of 23 passengers still hangs as negotiation for the captives is mired in controversy and power play.

The train, which took off from the Idu station in the Federal Capital Territory (FCT) in the evening of March 28, was derailed using explosives between Dutse and Kakau, about 30 minutes from the Rigasa station in Kaduna State.

The Nigeria Railway Corporation (NRC) said 362 passengers were on board the ill-fated train, out of which at least eight persons were reported killed by the attackers who also abducted over 60 others.

Since the abduction, many of the victims were released in piecemeal following ransom payment and a controversial hostage swap, in one instance.

The first to be released was the managing director of the Bank of Agriculture, Alwan Hassan, who reports at the time stated was released in exchange of N100 million ransom.

Hassan, who was released eight days after the attack, was filmed by the abductors before his release appealing to the government to hasten negotiation to secure the release of the persons he left behind. But no demand was made public at that point.

In late May, the terrorists contacted Malam Tukur Mamu, a Kaduna-based newspaper publisher and media consultant to an Islamic cleric, Sheikh Ahmad Gumi.

Daily Trust on Sunday gathered that Mamu was contacted at the prompting of the terrorists, who wanted to have a journalist who can publicise the condition of the abductees in a bid to pressure the government into acceding to their demands.

At that stage of the negotiation, there was said to be confusion occasioned by inter-agency rivalry as security and intelligence agencies operated at cross purposes, making the kidnappers to develop skepticism on who to deal with.

Through Mamu, the terrorists made public their demand for the release of eight of their children as a precondition for taking the negotiation forward.

Daily Trust on Sunday gathered that the abductors had agreed to release a substantial number of the victims in exchange for their eight children before the contact with Mamu.

“The government was in the process of identifying the children. In fact, by the time Mamu was brought into the picture, we had identified them and obtained photos of the children. It was one of the things that gave Mamu a push of credibility when he shared the photos with the terrorists,” a senior security source told our reporter.

The contact with Mamu was said to be a move by the terrorists to bypass government intercessors, who had begun a slow-paced talk with them. The five-man team was said to be empaneled by a senior security chief as an informal channel to deal with the situation which had generated so much furore.

The kidnappers, many of the released abductors said, identified Mamu from about 10 names listed by the victims.

With Mamu in the picture, the government concluded the swap arrangement by flying in the eight kids requested by the terrorists.

“We dispatched two jets to Kaduna in anticipation of at least 31 identified women and vulnerable persons. You can, therefore, imagine our shock and disappointment when we were told that only 11 persons were brought in exchange,” said a senior security source who was familiar with the deal but asked not to be named.

Another source in Kaduna described the atmosphere as tensed when those who went with burses to pick the captives were only presented with 11 persons, alleging that there was connivance and distortion of the agreement, which led to the slashing of the number of women and inclusion of two men from Yobe State.

Explaining what happened, Mamu, who some accused of indiscretion with the negotiation, said it also came to him as a shock, alleging that it was a demand from the government side that altered the configuration.

“Less than 48 hours to go for the execution of this agreement, on the government side, they presented another demand to be forwarded to them, that they should please consider the release of those that are sick, in addition to the women.

“They said they would look into it, but unknown to me, looking into it in their own estimation and judgement meant that they would drastically reduce the number of the women, since they would include those that are sick, including male victims.

“So, when we reached there, we saw 11 persons: 6 women and 5 men instead of all the women. Naturally, we were disappointed, but at that point there was nothing we could do. We were in a place where anything could happen; we were in the forest,” he said.

The mistrust that developed around the hostage swap, Daily Trust on Sunday gathered, wreaked the working relationship between Mamu and the backdoor committee working with the government.

This, it was learnt, further compounded the negotiation process as the two sides maintained separate processes.

While government’s side negotiates for a whole-scale freedom for all the captives, Mamu, on his side, became the point man for individual families who want to secure the release of their loved ones.

Imran Ahmad, who secured the release of his brother through Mamu’s intervention, told Daily Trust on Sunday how it happened: “When we went to him, he gave us a phone number and asked us to individually negotiate the amounts with the abductors. Our mother spoke to them, and after agreement, like in all cases, I knew the deal was communicated to Mamu; the people also contacted him to corroborate.

“Usually he (Mamu) would try to convince them to accept the offer, and when it is sealed, he would confirm the amount before you set out to deliver the money. In the case that no one is courageous to undertake the journey, he would send a staff from his office to go fetch the freed hostage,” he said.

With increased tension between him and security agents, Mamu announced his formal withdrawal from the negotiation, citing threats to his life. However, in spite of the announcement he continued to exert influence, making him the person still with the axe when it comes to the negotiations.

This has continued to pitch him against top echelon of security agencies, with some of them seeing him as being siding with the terrorists as against the interest of the country and the general public.

In an interview with Daily Trust on Sunday Mamu rebuffed the allegations against him explaining his own difficulties in dealing with situation.

How terrorists raked in N2bn in ransom

Daily Trust on Sunday learnt that through the piecemeal ransom negotiation, the train attackers have so far raked in at least N2 billion.

They had pegged the ransom at N100 million per person and received more than that in the case of expatriates. The N100 million tag was, however, discounted in few cases.

Daily Trust had exclusively reported on July 11 that the seven persons released on July 9 parted with N800million in ransom to the terrorists. Six Nigerians on the contingent paid N100m each, with the Pakistani national who was released along with them paying N200m.

“I think it was the second or third day when they came and said those who wanted to bail themselves should raise their hands. We raised our hands and some of us were picked and told what to pay. You either accepted or rejected, no negotiation. I was going to pay N100m and my colleague N200m. What could we do? We just had to tell our people,” one of the released persons, Hassan Aliyu later confirmed to Daily Trust.

It was also gathered that only two persons were released unconditionally at the instance of the abductors.

“The least amount paid per person was N70 million, but there is an ongoing negotiation for the release of two persons for an offer of N80 million. We don’t know if they would accept that,” a source told our reporter in Kaduna last weekend.

A family member of Abubakar Idris, who was released along with his wife and four children on August 10, told our reporter that despite claims that they were released on compassionate grounds due to the intervention of Dr Gumi, N200 million had to be paid to the abductors.

In an interview with our reporter, Mamu agreed that the ransom demand was “outrageous,” insisting, however, that “it is the government themselves that are encouraging the payment of ransom because when government does not take full charge of a situation like this you will only allow desperate family members to negotiate their way. If you are desperate and have the means to offer what they want, naturally, Nigerians will do it. And they are doing it in numbers, whether it is bandit or terrorist attacks.”

Despite acknowledging the illegality of paying for ransom, in line with a recent National Assembly legislation, Mamu said, “As long as government does not take control of this thing, I can assure you that there is no way you can stop desperate family members that have the means to reach out to them, negotiate and get the release of their loved ones. And that is what is happening now.

“Almost everybody who can pay to go out has paid. Most of those who are still there are persons who cannot meet the huge demand of the terrorists,” one source familiar with the negotiations told Daily Trust on Sunday.

As at yesterday, Daily Trust on Sunday gathered that 23 passengers were still being held by the attackers, who are said to insist on hefty ransom.

The backdoor committee is said to be still pushing for a deal to secure the release of the remaining passengers.

Mamu, who acknowledged the poor financial capacity of those still in captivity said he was talking to the abductors to rethink their demands.