Fishing bounces back in Maiduguri, revives job opportunities for youths 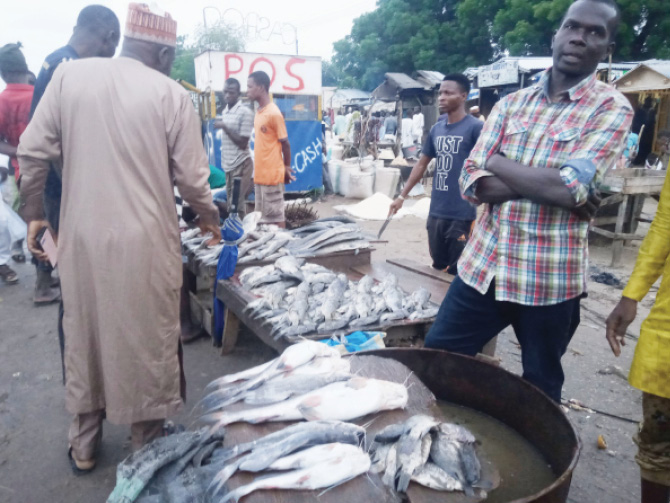 A fish seller attending to customers

Fresh fish business is gradually returning to its peak in Maiduguri following progress made in decimating Boko Haram terrorists and restoration of relative peace across the state.

Hundreds of traders, including wholesalers and retailers, have engaged in the supply of fresh, smoked and dry fish from the fishing communities in Baga where local fishermen supply to the wholesalers in Maiduguri and other major towns and cities in the state.

Our correspondent, who visited the popular Baga Road market, observed large number of young men busy selling varieties of fresh and live fish to prospective buyers and small-scale traders, apart from another section of the youths, and labourers going about different activities to earn a living in the market.

Mohammed said, “We now have varieties of fish like small and big catfish, Tilapia, Bonga, among others, that are now available for consumers in the market. The fish are supplied from Baga, others from Dawashi, Alau and Jere.”

Speaking on the prices, Mohammed explained that the prices are high considering some factors and depending on the quantity, “We buy in containers and each container costs between N25, 000 and N40,000 of all the types of fish you want. A big container of fresh catfish is N40,000 and a small container is N25,000.”

“A big-sized fresh catfish costs between N2,000 and N3,000 but the prices are gradually coming down with the increase of traders and availability of fish in the market. The price of fish is high because the fishing activities just commenced, coupled with persistent rainfall in the state.”

Another trader at the Baga Road market, Abdulmuminu Saidu, told Daily Trust on Sunday that the return of fishing activities has also provided job opportunities for unemployed youths in Maiduguri. “We have spent more than 10 years without jobs after all the major fishing communities were shut down due to Boko Haram insurgency. All the roads to the fishing communities were locked down but now the roads have been reopened and fish is being brought from Baga, Doron Baga, Dawashi and Gamboru Ngala, among others.

“Alhamdulillah, we are grateful to God for the return of peace which has opened opportunities for the people to go back to their day-to-day activities. On a daily basis, as a trader, I generate a little to feed my family. I make about N3,000 or more as profit, depending on availability of fish and sales in the market.”

Saidu explained, “In the past, only youths from Gwange area of Maiduguri metropolis engaged in the fish market here in Baga Road market but now, many young men from Sabon Layi, London, Bulumkutu and other areas are involved in selling, dissecting, cleaning, and loading the fish into vehicles, among other activities, to earn a living.

“Some of the youths you see here specialize in processing the fresh fish. When customers, especially consumers, buy the fish, they collect them, dissect and remove the unwanted particles, clean and process the fish for the end-users,” Saidu added.

Another trader, Bala Musa, said “Alhamdulillah God has restored peace in Borno State because traders are going from Maiduguri to Baga and Chad Republic to buy fresh fish and bring them to Maiduguri. We have been out of business for many years but now fishing activities and its market have returned and we are happy to witness this development.

Commenting on the fish prices, Musa said the prices of fresh fish is higher because before the advent of Boko Haram insurgency, many traders and dealers were transacting their business unrestricted and the market was open to everyone but now, only few traders go to buy the fish, besides the many taxes they pay along the roads which contribute to the price increase of the fish in the market.

“For example, 5kg of fish costs between N4,000 and N5,000. We hope and pray that the prices come down so that there will be more patronage from consumers in Maiduguri. I however believe that the many taxes and checkpoints would reduce as the peace process progresses in the state,” Musa added.

One of the labourers at the Baga Road market, Sadiq Abubakar Umar, who is also an SS2 student, said that the return of the fish market has helped him support his displaced family and aid his educational pursuit in Maiduguri.

“My parents who were displaced from Doron Baga took refuge at the Internally Displaced Persons Camp in Maiduguri. Recently, I decided to join other young men at the fish market to earn a living. Alhamdulillah, on a daily basis, I make between N1,000 and N2,000 depending on the availability of jobs in the market. I dissect and clean the fish for customers whenever they buy from the traders and they pay us for the services. We get more work when operators of restaurants buy the fish because of the quantity,” Umar said.

Findings also revealed that the return of fishing activities has led to the increase in the number of people, both male and female, frying and selling fresh fish by the roads side in Maiduguri.