Residents of Otiotio Road in Yenagoa, Bayelsa State capital, were on Friday thrown into pandemonium following a fire outbreak at a mini estate, which destroyed… 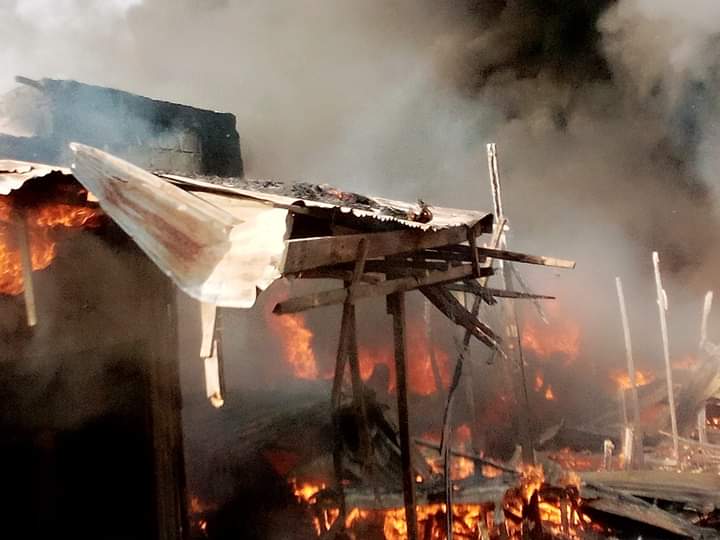 Sat, 5 Nov 2022 12:03:09 WAT
Residents of Otiotio Road in Yenagoa, Bayelsa State capital, were on Friday thrown into pandemonium following a fire outbreak at a mini estate, which destroyed property worth millions of naira.
It was gathered that the fire emanated from the fuel stored in the estate by black marketers. There was fuel scarcity in Bayelsa due to the flood that cut off access roads to the state for weeks.
Daily Trust reports that at the peak of flooding a few weeks ago, fuel was sold at N800 a litre, and has since been reduced to N500 as the flood water recedes.
It was learnt that a resident suffered burns but no life was lost. Property destroyed by the inferno included mattresses, generating sets, electronics, clothes, cash, cellphones, vital documents, kitchen utensils among others.
According to eyewitnesses and victims, the disaster might have been caused by a certain Nigerien who allegedly stocked black market fuel in one of the appartments where he resides.
One of the victims who identified herself as Mercy Clifford from Angiama community in Southern Ijaw Local Government Area of the state, recounted that she heard a sound like an explosion from the apartment of her neighbour who was cooking with a stove. She said the fire escalated and razed over 10 makeshift houses.
She said: “All my property, my secondary, primary school and church certificates, everything is gone. One of our neighbours was cooking with a stove and fire came from the stove and entered everywhere.”
She appealed to the government and well-meaning individuals to come to their aid, explaining that some of the victims, including her were flood victims who live in the estate to seek temporary refuge.
Another resident of the area, Hamza Abdullahi, narrated that he lost his money and other valuables to the incident.
Similarly, a victim, simply identified as Kingsley from Edo state, said the fire had dealt him a very big blow after havoc wreacked by flood.
Also, a courier agent, Allex Ada, said he left home as early as 7am only to be called on the phone that his apartmen was on fire, lamenting that he returned to see the debris of his property.
Police spokesman in Bayelsa State, SP Asinim Butswat, told our correspondent that the incident was not reported to the police.