Staff and visitors to the complex were barred by protesters from resuming working on Thursday. 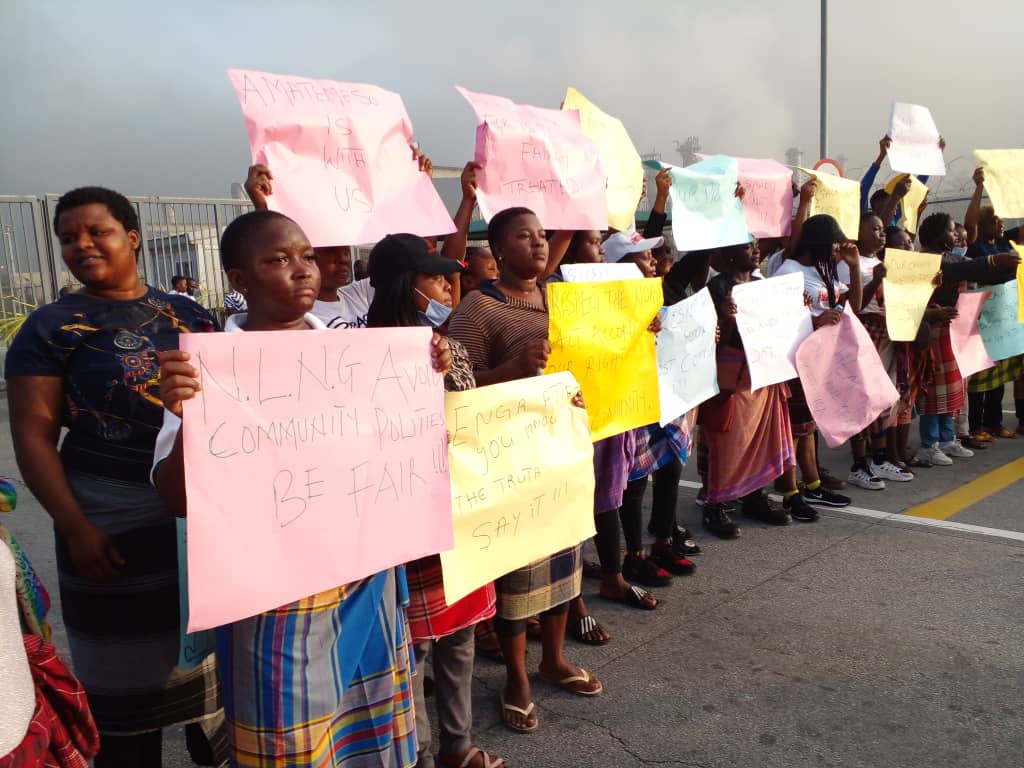 Hundreds of men and women of Finima in Bonny Local Government Area of Rivers State in the early hours of Thursday barricaded all entrance gates of the Nigeria Liquified Natural Gas complex in Bonny Island.

But the company has called it an ongoing “disagreement between two groups on Bonny Island leading to protests and blockade of some major routes”.

The residents were protesting failure of the multibillion-naira gas company to implement host community rights, a major plank of the national local content policy.

Staff and visitors to the complex were barred by protesters from resuming working on Thursday.

The protesters placards bore inscriptions such as “Bonny kingdom did not give you land,”  “you desecrated our land and nothing to show for it,” NLNG avoid community politics and be fair,”  “even scholarship you can’t give us”.

They say they are not happy that  over 30 years since the multinational berthed in the community nothing much has been achieved in addressing legacy issues.

One of the protesters, Adagogo Lambeth Brown, a community leader in Bonny said  legacy issues that include resettling of people who lost their ancestral land to the NLNG site in the early 90s during Gen. Babangida regime are yet to be settled.

He said issues of resettlement were still hanging many years after the gas-producing company took off.

He said that there were internally displaced persons and questioned how  Finima indigenes could be paying house rent in Finima.

He said that other legacy issues covers environment , employment, health and general welfare of the people.

Another indigene of the community,  Victoria Dappa Brown said that  the marginalization of the community  has been on for ages, adding “We need to be recognized as host community.”

She lamented that the community  gave up their land in late 80s when work on the site began, noting there was nothing to show since their land was acquired by the company while their sons and daughter are not employed nor given scholarship.

Former Chairman Finima Youth Council, Ala Hart, said the people are suffering and need implementation of the Community Content Guidelines of the Nigerian Content Development Monitoring Board.

In a reaction, NLNG called the protest the result of disagreement between groups on Bonny Island.

It said it applied the “principle and inclusiveness in engaging with its esteemed stakeholders”, according to a statement by Evono Fatayi-Williams, general manager for external relations and sustainable development at the company.

“The Company has always considered all stakeholders in the community trusted partners, and it continues to maintain this position.

“NLNG   remains   fully   committed   to   sustainable   development   in   the kingdom, hinged on active community participation to drive initiatives and projects that positively impact the lives of the community.”