Finidi: Why I wanted Pepe’s jersey despite Nigeria’s loss to Portugal 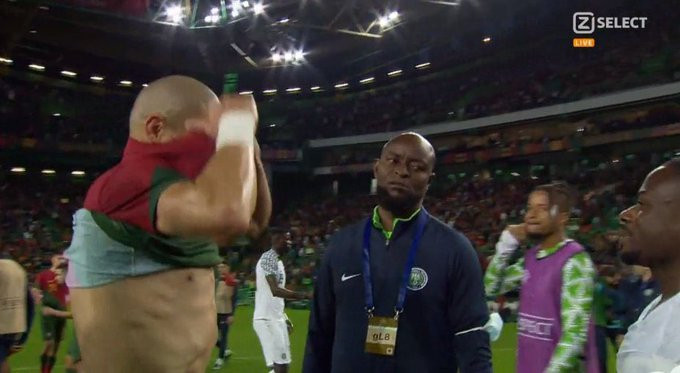 An ex-international and assistant Super Eagles coach, Finidi George, says he asked Portuguese defender, Kepler Laveran de Lima Ferreira, popularly known as Pepe for his shirt after Portugal vs Nigeria game on Thursday night because of his son.

Finidi came under fire on social media when videos of him appearing to compete for Pepe’s jersey with a Super Eagles player, Moses Simon, went viral.

The former Ajax star’s critics said he showed lack of empathy after Nigeria lost the game 4-0.

However, speaking with Premium Times about what transpired at the Estadio Jose Alvalade, he said he was misunderstood.

How Nigerians feel about 2022 World Cup without Super Eagles

Super Eagles were not destined to be in Qatar, says Sanusi

“My son asked me two weeks ago if it’s possible to get the shirt of Ronaldo or Pepe because he’s a very big fan of Real Madrid when they were at the club and I told him I will try,”Finidi said.

“Getting to the field, we knew Ronaldo wasn’t going to start because he was sick. So I told Pepe in the tunnel, please after the game, I would like to have the shirt for my son. So, he told me that was fine. After the game, I saw he was changing his shirt with one of the players and I went to remind him of what we said in the tunnel before the game started.

“He said he was going to give his shirt to a Super Eagles player (Zaidu Sanusi) playing in his club (Porto), and that definitely, I will get the shirt. I was speaking Spanish with him and that was it,” he said.