Finally, a bridge for Ibbi over River Benue

An important trading post. A strategic colonial town. A long history. And an important link between the northeast and the rest of the country, yet,… 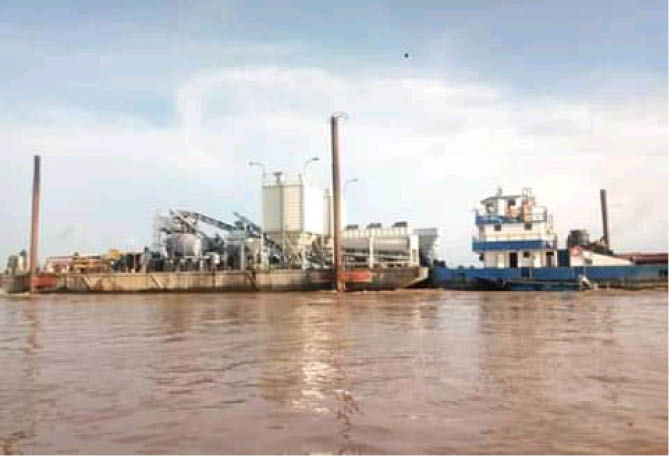 An important trading post. A strategic colonial town. A long history. And an important link between the northeast and the rest of the country, yet, Ibbi, in Taraba State, has never had a bridge over the Benue River that runs on its bank. It might just get one, as our correspondent reports.

When in 1930, Sultan of Sokoto, Muhammadu Tambare was deposed by the British colonial administration, he was banished to Wukari, on the other side of the country.

But to get to Wukari, he and his travelling party had to cross the Benue River at Ibbi, presently in Taraba State. There was no bridge but there were ferries. So the deposed emir and his family and followers caught a boat at Ibbi, made the crossing to Wukari, where he would spend the rest of his life until he died in 1935.

It is 2020 and today, those travelling to Wukari through Ibbi, still have to ride the ferry, as Muhammadu Tambare did all those years ago.

Ibbi, strategically located on the shores of River Benue, was a major route for traders from southern Taraba to Kano, Bauchi, Jos and many other towns in the Northern part of the country.

It was an important trading and administrative town where in 1886, the Royal Niger Company established a trading base. From there they administered territories under their control and it was also through Ibbi that missionaries accessed southern Taraba and parts of Plateau State, including Wase.

Today, it is an important shortcut to the Federal capital territory for people coming from Adamawa, parts of Gombe, Borno and Taraba states.

And even before the colonialists came, and after they left, it remained a major route for people from the Northern part of the country to Cameroon and Central Africa. And 400 years ago, when Hausa migrants settled in Southern Taraba, Ibbi was an important access point for them.

Ibbi was also used as a major port from where cash crops, which included groundnut, beniseed, hide and skin and merchandise goods from Europe were transported.

A 67-year-old resident of Ibbi, Mallam Yakubu Haruna, told Daily Trust that Ibbi located by the bank of River Benue was a key route and port missionaries, colonial administrator and local businessmen.

He said for years, the agitation for a bridge to be built in Ibbi had been on.

The traffic across the river is always heavy that Mallam Jalo Ibbi, owner of an engine boat at the local jetty known in Hausa as ‘ kwatan Ibbi’ or ‘Mashigin Ibbi’, told Daily Trust that more than 2, 000 people and about 60 vehicles are ferried across River Benue in Ibbi from different parts of the country daily.

But ferrying people and goods across Nigeria’s second-largest river is not without its dangers. Boat mishaps have claimed several lives over the years, increasing locals’ agitation for a bridge, for safer passage.

They believe the bridge would create greater access for the fish market, the biggest in the entire state and the Nwonyo International Fishing Festival in Ibbi, which attracts tourists from within and outside Nigeria.

Not too long ago, heavy construction machinery were set down on the riverbanks of Ibbi. Their purpose is to finally construct a bridge over the river linking Ibbi and Wukari and cutting down the distance between the state and the federal capital.

The bridge will be 2.4kilometers long and the road linking the bridge is 8.4 Kilometres long.

This development has pleased many in the town including its chief, Abubakar Salihu Danbawuro, who said people in Ibbi and Taraba State are happy that their yearning is now being addressed with the arrival of contractors.

He said the lack of a bridge has hampered the development of the town but in recognition of the town’s importance, the then Benue Plateau Government had constructed a road from Shendam to Ibbi and Wukari in 1973. But it neglected to construct a bridge.

Now with the bridge being constructed, the chief said, when completed, it would make movement of goods and services easier from different parts of the country and would further boost the social and economic growth of the area.

The struggle for the bridge, the chief said, started some 50 years ago and thanked the president, the governor of Taraba State and the Aku_Uka of Wukari, Dr Shekarau Angyu for their support and contribution towards achieving the desire of the people.

“The Ibbi bridge, when completed, will serve as a gateway to many states in the country and that is why we are happy over the commencement of the project,” he said.

“Taraba State government will provide security to protect the workers and equipment of the company,” he said

He said the project was important to the state and all states in the North-East sub-region as well as those in the South East and South-South.

Darius revealed that president Buhari had visited Ibbi when he was Chairman of the Petroleum Task Force and stressed the need for a bridge to be built in the area.

He commended President Buhari for awarding the contract for the bridge and advised Ibbi community to cooperate with the contractor to ensure speedy work.

The site engineer, Mr Adetona Elisha said all stages of soil tests have been completed and materials are being transported to the project site in batches.

If completed in 2021, as promised, it would mean that people passing through Ibbi will no longer have to cross the river by ferry as Sultan Muhammadu Tambure did in 1930.