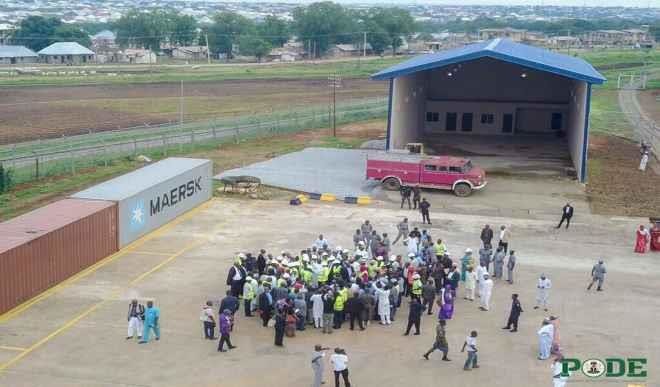 The Federal Government has concluded plans to introduce cargo delivery by rail to the Kaduna Inland Dry Port.

Mr Tahir Idris, Director, Special Duties, Nigerian Shippers Council (NSC) said, in statement on Sunday, in Abuja, that the inauguration was scheduled to hold on May 7, at the facility’s premises in Kakuri, Kaduna State.

Idris said in the statement that Mr Hassan Bello, the Executive Secretary of NSC, had disclosed that connecting the railway to the dry port “is a watershed to the facility”.

Bello said that the Council would also hold an interactive session with all relevant stakeholders immediately after the event themed: “Optimising the Kaduna dry port as key to Nigeria economic diversification”.

He said the rail facility would lead to the full optimisation of the Kaduna inland dry port, adding that it would also drive down significantly the cost of transporting containers from Lagos to Kaduna.

“So much cargo is coming to Kaduna, but on trucks. It takes so much money to transport goods by trucks from Lagos to Kaduna. If it is by rail, the cost will drop by over 60 per cent,” he said.

He also said transporting containers by railway would eliminate the risks of diversion, goods tampering and also reduce the risks of accidents by more than 95 per cent, thus driving down the cost of insuring cargo to Kaduna as a point of entry.

Bello noted that, with reduced cost of transporting the goods, the cost of goods will reduce which will further curb inflation.

According to him, hundreds of trucks will be taken off the roads, thus leading to longer roads life span and less accidents due to activities of truck drivers.