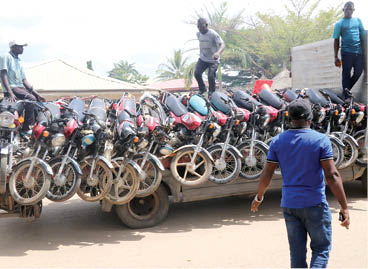 This came after the combined team of the administration recently seized 94 motorcycles, popularly called okada, at Kubwa in Bwari Area Council of the territory.

During the fresh exercise, on Tuesday, at Dutse-Alhaji junction, Arab junction, Jahi and Kubwa Phase 4,  Senior Special Assistant on Monitoring, Inspection, and Enforcement to the Minister of FCT, Ikharo Attah, said the enforcement followed the minister’s directives to mop up the city of commercial motorcycles.

He stated that the operation, which would be sustained, became imperative following the un-ruly activities of okada riders in areas they are not supposed to operate.

Attah explained that since the commencement of the exercise, the report from Kubwa on se-curity showed only 11 per cent success had been recorded.

He, however, assured that the menace of okada in the area was gradually coming to an end.

The Head, Directorate of Road Traffic Services (DRTS) Operations, Mrs Deborah, also said: “The exercise is to rid the city of the menace of okada riders.”

On sustaining the operation, Adamu Shehu, Head of the DRTS Task Force Team, said the DRTS under the current director, Abdullateef Bello, is set to end illegal activities of automobiles within the city.