The Federal Capital Territory Administration (FCTA) has seized and destroyed over 300 motorcycles at Area 1, Garki, Abuja, after a raid by a combined team… 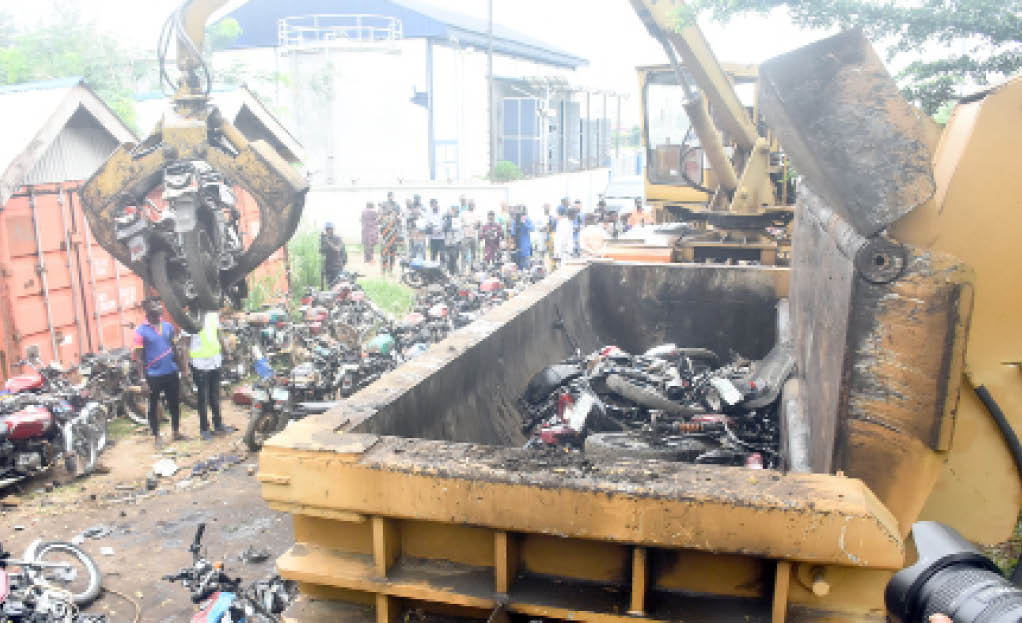 The Federal Capital Territory Administration (FCTA) has seized and destroyed over 300 motorcycles at Area 1, Garki, Abuja, after a raid by a combined team of officials, police, military and para-military forces in Guzape and Durumi districts, Lugbe and Kubwa axes.

The Senior Special Assistant to the FCT Minister on Monitoring, Inspection and Enforcement, Ikharo Attah, said the worst situation which the minister was worried about was the flagrant attitude of the operators of the motorcycles: abusing traffic rules and incessantly driving on the wrong lanes.

He said the administration only allowed them to operate in interior villages and in some estates, but that they had continued to violate the restrictions with serious arrogance and incessant violent attacks on enforcement officers.

He explained that the new policy of impounding bikes and immediately crushing them was a signature project initiated to serve as deterrent and also eliminate the crowd that always besieged the office of the Directorate of Road Traffic Services (DRTs) to beg for the release of the bikes.

He said, “This operation is a signature project and a decision of the FCTA Security Committee. They agreed that we should go back to massive enforcement of the ban on commercial motorcycles in the Federal Capital City, as well as some strategic locations like the Airport Road and Kubwa where they have become a big threat to the people.

“We have brought the 356 motorcycles here in Area 1 for immediate crushing because the menace cannot continue. We have gotten complaints daily about Okada riders across the city.

“The operation cannot be said to be highhandedness because since 2006 when the ban started the impounded bikes hardly get back to them. The minister has given us a marching order to impound and crush in the full glare of everybody to avoid the allegation that the bikes were seized and given to somebody else.”