The FCT Chairman of the Medical and Health Workers Union (MHWU), Comrade Abubakar Shanabo, has been conferred with the traditional title: Tafidan Paikon-Kore. Also, a… 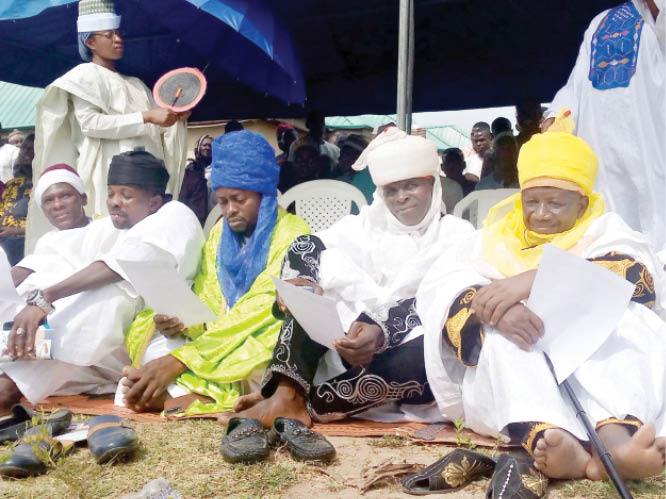 The FCT Chairman of the Medical and Health Workers Union (MHWU), Comrade Abubakar Shanabo, has been conferred with the traditional title: Tafidan Paikon-Kore.

Also, a retired head teacher with the Local Education Authority (LEA), Ahmad Shangalo, was conferred with the title of Talban Paikon-Kore; the PDP vice chairmanship candidate in the last administration in Gwagwalada Area Council, Ibn Jafar Ibrahim, with the Garkuwan Paikon-Kore; and 30 other prominent indigenes of the area were also conferred with traditional titles.

The Etsu Paikon-Kore, His Royal Highness (HRH), Alhaji Yusuf Barwa, while speaking during the turbaning of the title awardees during a ceremony to mark his 20th anniversary on throne on Saturday, said the palace decided to confer the titles on the personalities due to their immense contribution to peace and development of the area.

He said the Paikon-Kore chiefdom had a long history of peaceful coexistence, rich culture and tradition, even as he called on his subjects to continue to live in peace with one another, especially farmers and herders.

He said, “I will say to God be the glory that today I am marking my 20 years on the throne as the 17th Etsu Paikon-Kore. And I am glad that my reign within these last 20 years has been a flourishing success, especially in the area of peace and unity among my subjects.”

One of the title recipients, the Garkuwan Paikon-Kore, Ibn Jafar Ibrahim, described the 20-year reign of the monarch as successful.

He said the reign of Alhaji Barwa had witnessed a lot of development, especially in infrastructure such as primary schools, health centre, police outpost, court, among others.

However, he said even with the success story, for some reasons Paikon-Kore had been given a post-primary school despite having one of the earliest primary schools in the FCT and first in Gwagwalada Area Council since colonialism.