For many farmers and other stakeholders in the agro sector, the year 2020 will remain one of the worst years in the history of Nigeria… 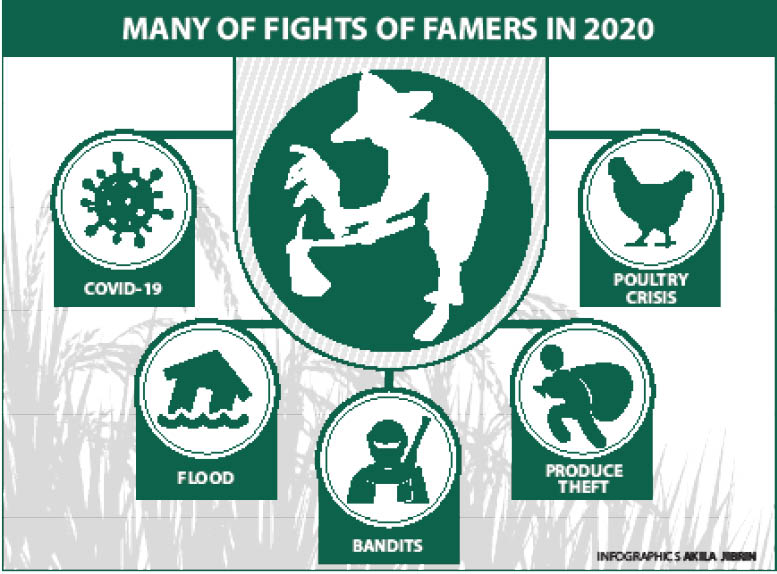 By Hussein Yahaya & Vincent A. Yusuf

For many farmers and other stakeholders in the agro sector, the year 2020 will remain one of the worst years in the history of Nigeria because it introduced new dynamics that millions of smallholder farmers have to contend with.

The agricultural sector was confronted with many challenges ranging from the climate change-related issues, conflicts and the complications exacerbated by the global COVID-19 pandemic, which brought pains and heartbreak to farmers and agribusiness players.

First, the COVID-19 lockdown and restrictions happened at the time dry season farmers were about to harvest their crops and wet season farmers were about to commence cultivation. Many farmers could not access their farms while for others getting labourers to harvest their farms since mechanization is a huge challenge and harvest is manual, is the problem.

Movement restrictions introduced to curb the spread of the coronavirus locked-down markets had disrupted the rural economy. Many farmers could not sell their produce to enable them to buy seeds and fertilizer, pay labourers/tractor services.

Even when the lockdown was lifted for the agricultural sector, the price of fertilizer became so high that many smallholder farmers could not afford it. In some places, the price went as high as N13,000 for a 50kg bag of Indorama and Notore Urea.

NPK 15-15-15 went up to N25,000 while the federal government’s NPK 20-10-10 under the Presidential Fertilizer Initiative, which was meant to be sold to farmers at N5000 was not available in most places and in areas where they were, the price went up to N7,000 and higher in some places according to reports.

For farmers in Zamfara, Katsina, southern Kaduna, some parts of Kebbi and Sokoto states, bandits’ activities not only denied them access to their farms but left many killed in their farms. Many farming communities were razed down. Many people were kidnapped for ransom. Many paid large sums of money or surrendered large portions of their harvest to the bandits. Many villages in those states have now become desolate.

The agric sector also witnessed one of the worst disasters when floods wiped out over 450,000 hectares of rice and maize fields estimated at over N3.5 billion across Kebbi, Sokoto and Kano states. Many of the affected farmers are yet to be compensated as their livelihood was destroyed.

The flood was the worst since the 2012 disaster that wreaked havoc across most of Nigeria’s coastal cities and flood-prone areas killing people and washing away farmlands.

Meanwhile, as the flood was putting pains in the hearts of farmers up North, farmers down South were confronted with drought. For two months, farmers watched helplessly as their investment in crops withered away. With the absence of irrigation facilities, there was nothing the farmers could do to mitigate the impact of the climate change-related disaster.

Another subsector that was badly hit this year was poultry and feeds. The scarcity of maize from the beginning caused prices to increase so much that thousands of smallholder farmers folded up. It also forced the Poultry Association of Nigeria to send a “Save our Soul” appeal to the federal government for urgent attention. The federal government responded to the appeal and released 5,000 metric tons of maize from the nation’s strategic reserve to the farmers in addition to granting some of the big players licenses to import about 222 metric tons of maize to augment the shortfall for the feed industry.

However, this was just a short-term solution as barely three months later, the scarcity of soybean struck, making the farmers express fear that by January 2021, the industry would shut down completely. The scarcity resulted in a serious feed crisis in the industry as prices reached a record high in its history rising from N2,600 in February to about N5,500 now.

The poultry industry lost an estimated N7 million jobs with figures projected to reach 10 million by January 2021 whereas the loss in investments was estimated conservatively at about N1.5 trillion.

While the poultry farmers are still struggling to deal with the challenges that marred the subsector, the crop farmers despite the daunting challenges that confronted the sector throughout the 2020 farming year, had buyers coming right up to their farms even before harvest to make bulk purchase arrangements.

This is also the first time that the prices of grains are refusing to come down at harvest time, sparking fear of looming hunger and the call for the borders to be reopened, which will allow an influx of smuggled products through the country’s porous borders.