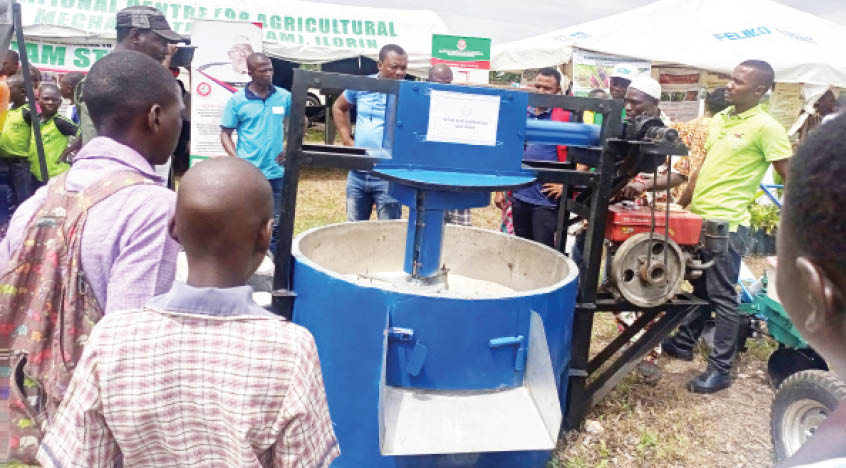 One of the local technologies displayed at the show

The 2022 edition of the National Agricultural Show ended yesterday with renewed hope for a better future.

For five days, farmers, agribusiness entrepreneurs, technology developers and service providers as well as research institutes came together to network and showcase their innovations.

This year’s show came at a time when global warming, exacerbated by climate change, caused heavy rainfall, leading to massive floods that wreaked havoc on farms worth billions of naira.

The show was also affected by the challenging global economic crisis which spiked inflation, and reduced the purchasing power of many people.

Despite these challenges, the exhibition witnessed significant attendance by key stakeholders. Some of the key stakeholders, who showed strong presence with an array of technologies include the National Centre for Agricultural Mechanisation (NCAM) Ilorin, Kwara State.

The centre showcased over 20 locally developed technologies that can meet the needs of smallholder farmers across many crops and value chains.

Over the years, experts have been of the opinion that institutions like NCAM should be given massive support to develop technologies that suit the Nigerian climatic conditions since the country has different agro-ecological zones.

Some of the technologies include complete processing machines for rice and oil palm milling and a semi-automated garri fryer, which enable users to set the required temperature.

The centre also showcased a number of machines for field operations. These include cassava planter and up-rooter and a yam heap making machine, one of their new innovations to reduce drudgery in yam production. Several other technologies were exhibited to get the farmers buy-in.

Although inflation has affected prices, compared to those stated during the previous show, information from the centre indicated that farmers can approach the institute as a group and agree on a plan that will make affordability easier. They can also specifically ask for certain features to be included in a particular technology they require.

Also present was the National Animal Production Research Institute, Zaria, which developed the foremost Shika Brown chicken. The institute showcased various technologies in the livestock subsector, including animal feed technology. Several other livestock technologies were also showcased by other developers.

Also, from Zaria was the Institute of Agricultural Research which brought quite a number of innovations both in terms of seed and equipment including planters, threshers and a host of new varieties of seeds.

The National Institute for Horticulture Benin was not left out as several technologies and new short-term duration seedlings of coconut, oil palm and other tree crops from them excited farmers.

Besides these research institutes, some states showed strong presence. In its usual tradition, Kano State had the biggest contingent with all the 44 local governments represented with several traditional crops, technologies for crop, livestock, horticulture and irrigation.

Kano also brought some animals to the show, which was a huge sight for many secondary school students as well as primary school pupils.

Closely followed by Kano is the host state, Nasarawa, which also showcased what it has.

However, the number of states that attended the show this year was not impressive compared to previous years where more than 10 states including representatives of commodity associations showed strong presence.

Conversely, there were a lot of value chain entrepreneurs.  Companies like Dangote and Nagari were on hand to show farmers and consumers what they have.

While the show might have come and gone, there is need for the organisers to adequately mobilise farmers and other stakeholders to participate in the annual fiesta.

Although it is run by a foundation, there is need for the federal ministries of Agriculture and Rural Development, Trade and Industry and Science and Technology to network on issues like this.

This will create a robust platform for all the interlink ministries to bring all the relevant stakeholders under one roof for such number of days to network. This will not only create opportunities but attract more people to see areas with huge potentials and take advantage of them.