Verdict: False. All gold deposits across Nigeria belong to the Federal Government.

The claim, posted on his handle, @_terry2020, implies double standard in ownership of natural resources across the country.

Terry was reacting to a Daily Trust story in which Zamfara State said it would supply gold worth N5 billion to the Central Bank of Nigeria (CBN). 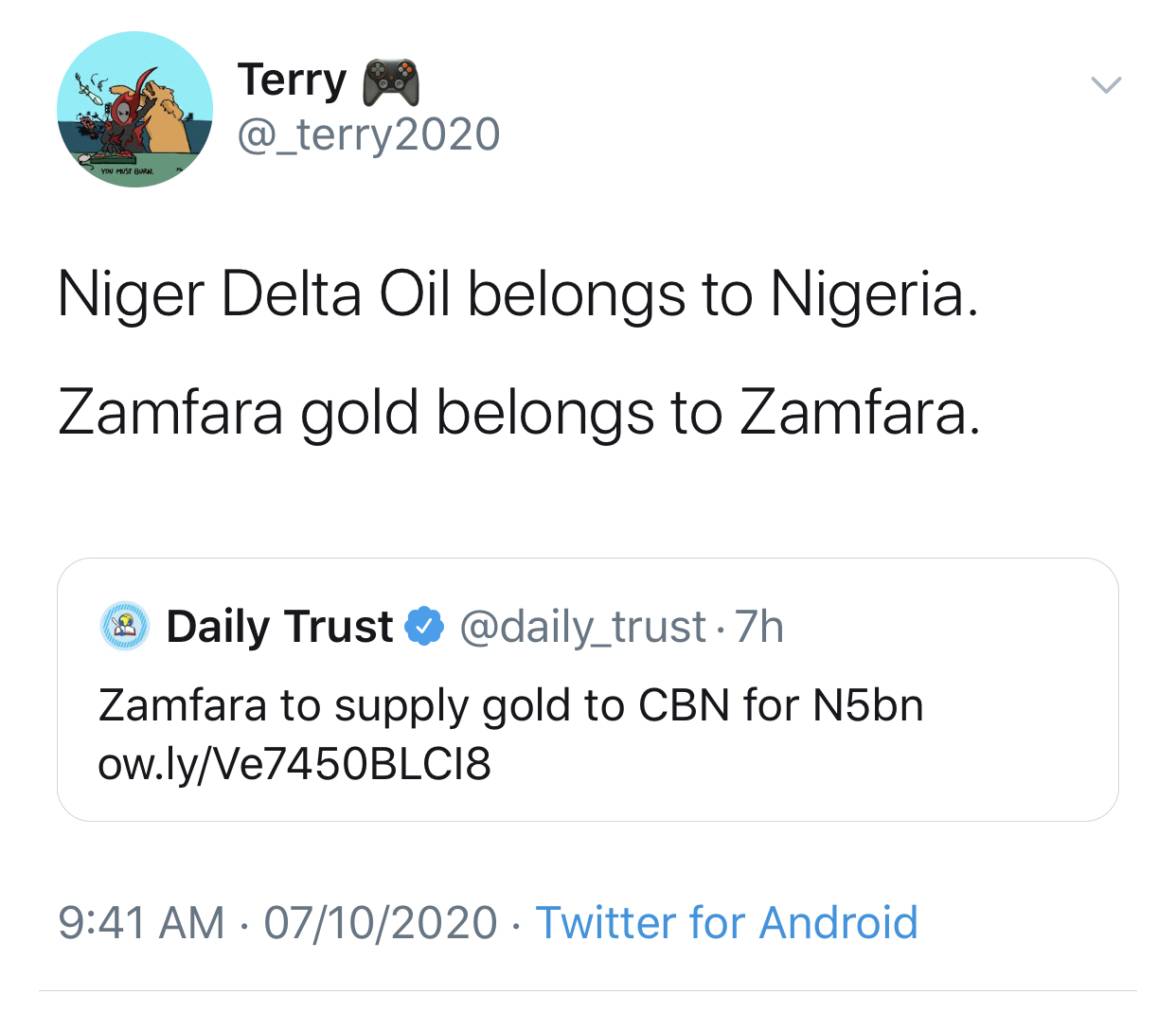 A screenshot of the claim that Zamfara gold belongs to Zamfara

But how true is the claim that gold deposits in Zamfara State actually belong to the state and not the Federal Government?

The Nigeria Minerals and Mining Act, 2007, vests the ownership of all minerals, including gold, in the Federal Government.

The Act vests control of all properties and minerals in Nigeria in the Federal Government and prohibits unauthorised exploration or exploitation of minerals.

“All lands in which minerals have been found in commercial quantities shall from the commencement of the Act be acquired by the Federal Government in accordance with the Land Use Act. Property in mineral resources shall pass from the Government to the person by whom the mineral resources are lawfully won, upon their recovery in accordance with provisions of the Act,” a post on Mondaq explained.

To mine gold in Zamfara or any other part of the country, a licence must be obtained from the Federal Government through the Nigeria Mining Cadastre Office of the Federal Ministry of Mines and Steel Development.

Recently, Governor Bello Matawalle of Zamfara disclosed that Zamfara had partnered some investors to mine gold in the state, displaced illegal miners and organised local miners into cooperative groups under the Presidential Artisanal Gold Mining Development Initiative (PAGMI).

Note that Governor Matawalle also recently disclosed that the gold to be sold to the CBN would come from the state’s gold reserve purchased over time.

“For a start, we have purchased 31 kilogramme of gold, wholly mined and refined by our artisanal miners. We will subsequently continue to buy gold from our local miners so as to gradually improve the reserve. The precious metal would be deposited in a bank,” the governor said.

This implies that it does not own the gold but actually purchased it from the market.

The Federal Government has also debunked the claim that gold deposits in Zamfara State belong to the state.

Special Assistant to the President on Digital and New Media, Tolu Ogunlesi, tweeted using his official twitter handle, @toluogunlesi, that

“Zamfara gold (like all other resources) is owned by @NigeriaGov, on behalf of Nigeria. Anyone who wants to mine it has to apply for a license, mine, & pay taxes, royalties etc. Anybody can apply for a license; Lagos or Rivers can set up a mining company & apply to mine Zamfara gold,” Ogunlesi tweeted. 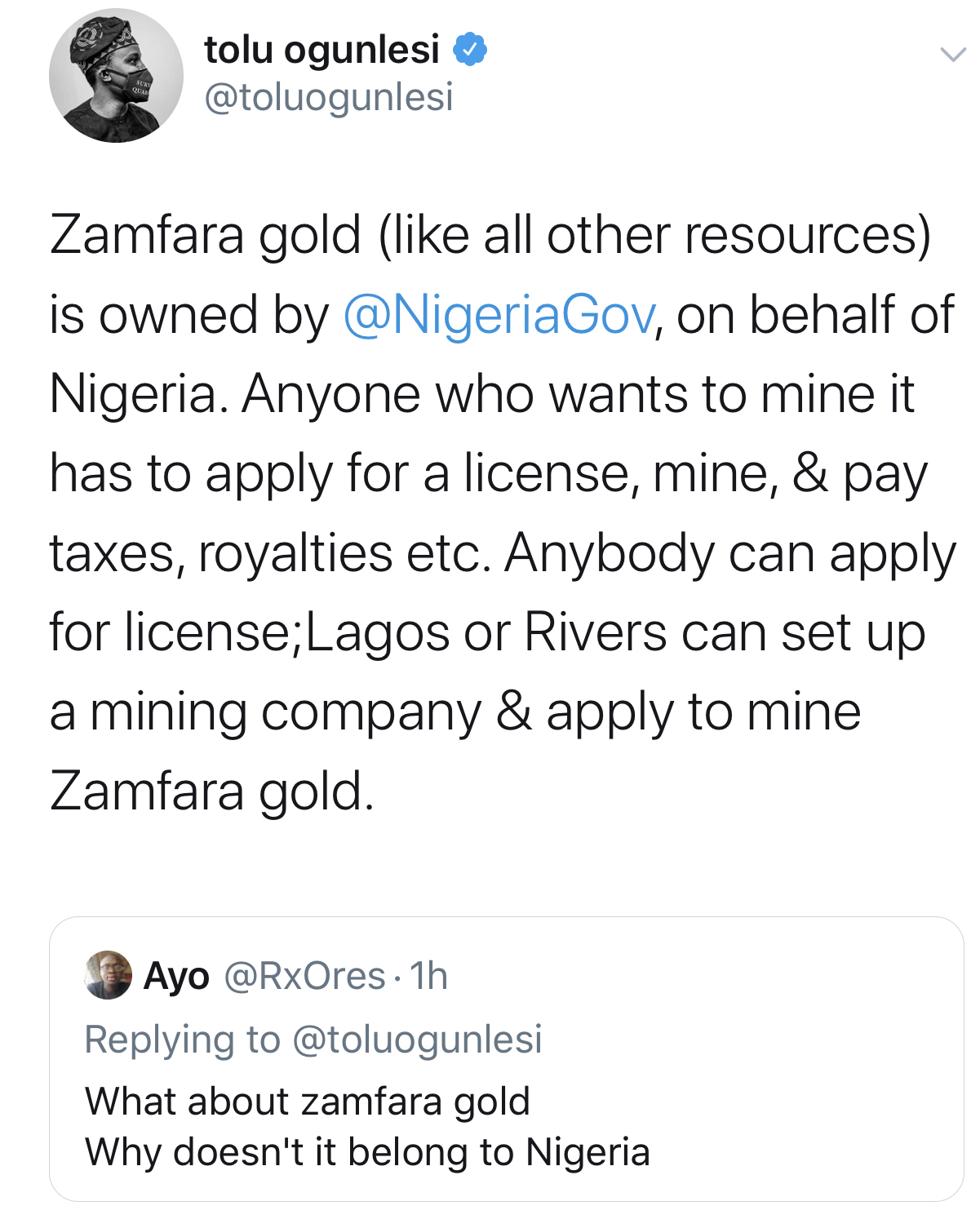 A screenshot of Ogunlesi’s debunking of the claim

The presidential aide explained further that gold mining in Zamfara is business regulated by the Federal Government, just as the oil in the Niger Delta.

“If you choose to believe that Zamfara gold belongs to Zamfara (it doesn’t!), you’re doing yourself. Someone else will make a move, get a license, and go and make money. That’s why it’s always important to be sure your mindset is not blocking the opportunities available to you,” he tweeted.

“Nothing stops South South States from setting up Modular Refineries. All they need to do is set up a company and apply for a license, or invest in existing companies. @NigeriaGov invested $10m in Waltersmith Refinery in Imo, Edo State Govt invested N700m in AIPCC in Edo,” he explained.

Similarly. a twitter user, Omo Iya Bolaji, explained that Zamfara State bought the gold from miners and sold it to the CBN.

“A state (Zamfara) is competing with public entities and buying gold from the artisanal miners and selling to the FG who want to deposit gold bars. It’s business and not resource control,” he tweeted on his handle, @Adekbolagi. 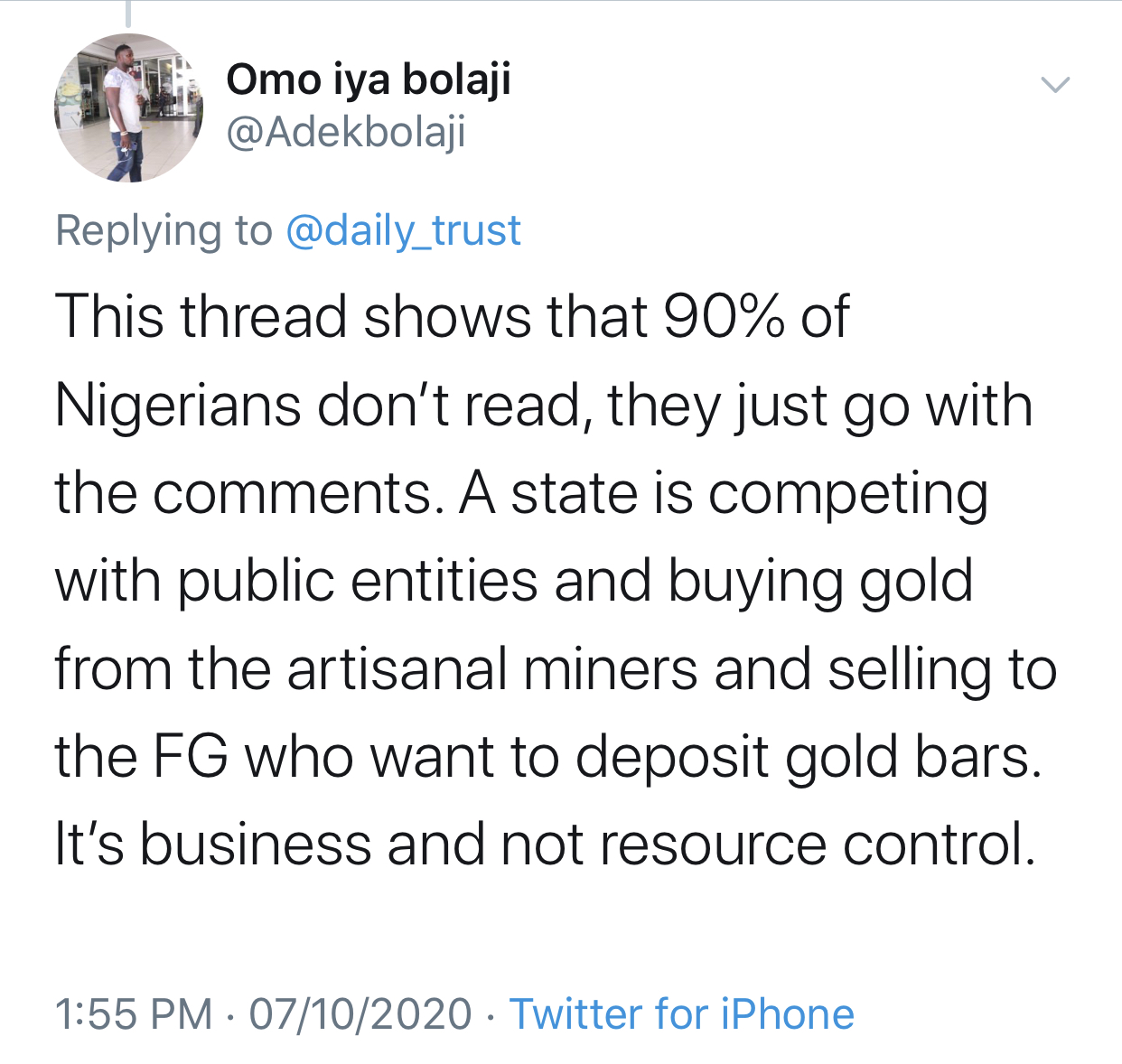