Fact-check: These pictures of armed herders are not from Nigeria 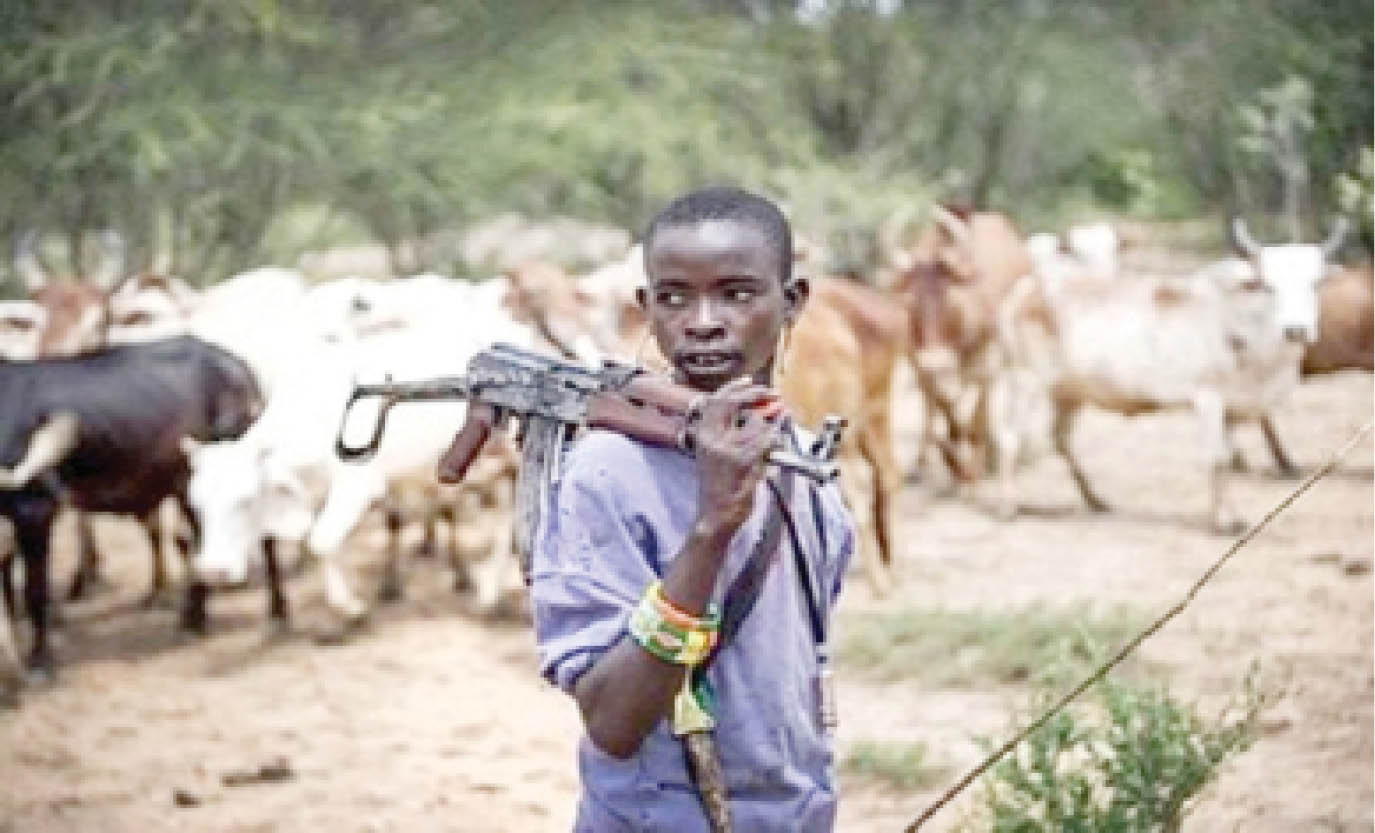 Several photos of ‘armed Fulani herdsmen’ have for long been circulated especially on the social media in Nigeria, including traditional media such as newspapers.

However, there are suspicions that some of the photos are either not from Nigeria or do not represent Fulani or even both.

Daily Trust selects five of such widely circulating photos of armed Fulani herders  for verification in terms of their origins and identities of the persons in the photos.

The above photo of a man posing with a gun in front of a herd of cattle has been published in several media outlets to depict armed Fulani herders in Nigeria.

For instance, Sunday Sun published the photo on page 7 of its February 21, 2021 edition. The photo accompanied a story entitled “Fulani Herdsmen in South to Northern Elders: We won’t Return to North.”

Similarly, The Guardian also published the same photo on February 9, 2021, along with a story entitled “Eminent Nigerians urge government action against killer herdsmen.”

The photo had no caption to show who, where, when the photo was taken or even the context of the photo.

Meanwhile, a reverse image search shows that the photo was taken on December 14, 2013, by Goran Tomasevic of Reuters.

It showed a man from the Dinka tribe holding his AK-47 rifle in front of cows in a Dinka cattle herders camp near Rumbek, capital of the Lakes State in central South Sudan.

The image was posted online on Adobe Stock on April 26, 2016, and it has spread across social media and even the traditional media in Nigeria, supposedly depicting Fulani herdsmen with lethal weapons.

The above image has been widely circulated in Nigeria to portray armed Fulani herdsmen.

The photo has found its way into both the traditional media and social media as well.

For instance, Sunday Vanguard published the photo on page 34 of February 23, 2020 edition without a caption to illustrate its special report: “Delta Killings: Enter our bush and die, rogue herdsmen bark at police, soldiers.”

The Punch also published the same photo on its page 3 Panorama with the interview: “Buhari regime encouraging herdsmen to subjugate others and turning Nigeria into Fulani colony- M’Belt Forum President, Pogu.”

A reverse image search showed that the photo was neither taken in Nigeria nor does it show a Fulani herdsman.

Daily Trust found that the photo was first posted online by AllAfrica as far back as June 21, 2014.

The photo showed a young Turkana man with an AK-47 rifle. Turkana County is a county in the former Rift Valley Province of Kenya.

The Turkana people live in the arid, sandy expense of Northern Kenya, from Lake Rudolf (Lake Turkana) to the Ugandan border.

The photo does not show a Fulani herder from Nigeria. The photo showed a young Turkana man with an AK-47 rifle.

A reverse image search showed that the photo has been in circulation as far back as July 7, 2014, when it was first uploaded by AgroNigeria on its website agronigeria.com.ng.

On September 1, 2015, a news website, Information Nigeria, published the same photo indicating that the cattle rearer, Aminu Hambane, was wanted for his alleged involvement in various attacks on communities in Barkin Ladi and Riyom local government areas of Plateau State.

The report indicated that Operation Safe Haven had “declared the person, whose photograph is here attached (Aminu Hambane) wanted.”

A screenshot of the report on Information Nigeria’s website.

However, the fact that the photo has been in circulation about a year before Information Nigeria ran the report also raised doubts that the person in the photo was not the actual person declared wanted. Besides, Daily Trust also found another report on the same website in which the photo was used without a caption.

Daily Trust could not prove the identity or location of the man in the photo slinging a gun on his shoulder. Several years of multiple use on social media and newspapers have striped the photo of its metadata for verification. Besides, there are not enough landmarks to aid geolocation of the photo.

The photo was published on page 26 of Vanguard on January 26, 2021, with the caption: “Armed herdsmen ordered to leave Ondo forest reserves.”

The earliest traceable usage of the photo was from February 6, 2016, by Ghana-based Graphic Online.

Since then, it has been used to depict armed Fulani cattle herders in South Sudan, Ghana, Somalia, Nigeria and even Ethiopia.

Just like newspapers in Nigeria, the photo has been used mostly without caption by journalists across the African continent.

Like many similar images, the photo has been stripped of its metadata, making precise geolocation impossible.

Location unproven even as the identity of the person in the photo remains unknown.

The above photo has also gone viral in Nigeria, supposedly depicting an armed Fulani herdsman.

For instance, The Punch had published the photo on its page 3 of January 28, 2021, with the interview: “Buhari regime encouraging herdsmen to subjugate others and turning Nigeria into Fulani colony- M’Belt Forum President, Pogu.”

In verifying the image, Daily Trust found that the photo was first uploaded online by Felix Features on June 19, 2012.

The photographer captioned it as “A young Pokot warrior, Korinamba Ruto, herds his cattle with an AKS 47 gun on his shoulder which he carries for protection against attacks from cattle rustlers from the neighbouring Turkana community.”

Usage of this photo, like the others, is a wrong representation of a “Fulani herdsman” in Nigeria. The photo does not show a Fulani herder from Nigeria. In reality, it showed a Pokot man from Kenya.

Daily Trust spoke to media experts and stakeholders and they were unanimous in condemning the practice of using unverified photos to depict armed Fulani herders.

“These photos are not a true reflection of the Fulani and the situation in Nigeria. The photos are misleading and an attempt to create a false narrative. It is  unethical to use such photos,” he said.

The Executive Director, Civil Society Legislative Advocacy Centre (CISLAC), Auwal Musa Rafsanjani, told Daily Trust that it is not a good development in Nigeria to see some of the pictures and videos that are totally from another country or people to be used without verification for mischief and deliberate effort to create crises or promote hatred among Nigerians.

“We observe serious cases of unacceptable innocent and deliberate misrepresentations that continue to trigger inflammatory statements and hate speeches with resultant ethno-religious and political crises across the country,” he said.

Rafsanjani said CISLAC is more concerned that many journalists operate without adequate awareness and understanding of relevant laws regulating the conduct of the media.

He said that a well-informed journalist or media outfit should be more concerned about investigative and evidence-based journalism through authenticated fact-finding publication within the provisions of the laws; not pushed by temptation to publish divisive, misrepresented or derogatory information with a propensity to endanger peace and unity of the country.

“We further call for adequate training and retraining programmes for journalists on various legal provisions to ensure their issues are professionally covered and reported,” he said.

A senior lecturer at the Mass Communication Department of the University of Maiduguri, Dr Nuhu Gapsiso, said it is unethical to use such unverified photos because the ethical principle of accuracy and fairness has been jeopardised.

He said this is because the principle frowns at the publishing of  inaccurate and misleading information.

“The Nigerian Journalists by using photos of armed Fulani herders from neighboring African countries have violated this particular code of ethics,” he said.

A former managing editor of Daily Trust, Dr Theophilus Abbah, condemned the use of such photos in any guise whatsoever to depict the Fulani.

Dr Abbah, who is the current Director of Daily Trust Foundation, said journalists must use real photos of Fulani taken in Nigeria or use cartoons and infographics instead of using foreign photos to erroneously depict them.