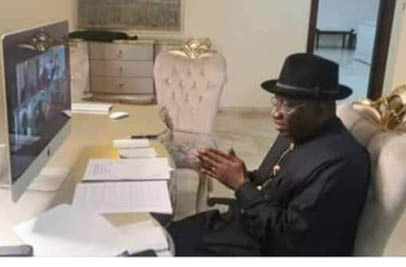 Full Text: A Facebook user George Bakpo posted on his handle saying “Boom! Ex-President Goodluck Jonathan has appeared before the APC presidential screening committee via ZOOM from Italy. He was asked to take a bow and leave because of persistent internet network problem.”

As of the time of this report, the post has garnered 42 shares, 16 comments and 16 reactions.

Verification: The post was accompanied by a picture of the former president before a desktop computer which suggested he was attending a virtual meeting.

However, using the Google Reverse Image Search, Daily Trust found that the image was first taken in September 2020 when the former president addressed a special virtual panel of the Commonwealth member nations which focused on 40 years of Commonwealth’s election observation experience.

Also, using the Tin Eye fact-checking verifying tool, the image was confirmed to have first surfaced on the internet on September 17, 2020 where the former president addressed the Commonwealth member nations where he called on them to improve quality of elections.

Background: On May 9, 2022, news broke out that former President Jonathan had picked the expression of interest and nomination forms to contest the 2023 presidential election on the platform of the All Progressives Congress (APC).

It was reported that a coalition of northern groups picked the forms on behalf of Jonathan at the International Conference Centre (ICC) in Abuja.

Jonathan, however, rejected the expression of interest and nomination forms bought for him to contest the presidential primary of the APC the following day, May 10.

The rejection was announced by his media adviser, Ikechukwu Eze.

He said, “It has come to the notice of His Excellency, Dr. Goodluck Ebele Jonathan, that a group has purportedly purchased the Presidential Nomination and Expression of Interest forms of the All Progressives Congress (the APC), in his name.

“We wish to categorically state that Dr. Jonathan was not aware of this bid and did not authorize it.”

However, in another twist of events, the Federal High Court in Yenagoa, Bayelsa State last week cleared Mr. Jonathan to run for president in 2023.

The judge, Isa Dashen, while delivering the judgement, held that Mr Jonathan’s right to vie for the presidency a second time cannot be stopped by any retroactive law.

Falana had noted that Mr Jonathan, who was Nigeria’s president between 2010 and 2015, would breach constitutional term limits of two terms of eight years if he runs for the presidency and wins again.

Meanwhile, Daily Trust reports that APC, which conducted its presidential screening on May 30 and 31, released a 23-man list which did not contain the name of the former president.

Also, during the period of the screening led by Mr. John Oyegun, the former president was in Milan, Italy attending an international function.

“I arrived in Milan, Italy, to attend this year’s high-level advisory board meeting of the European Corporate Council on Africa and the Middle East (ECAM Council), holding in the ancient city of Como.

“I am pleased to be part of ECAM Council’s creative engagements toward promoting more productive investment in health, education and other social services in Africa and the Middle East,” Jonathan posted.

Verdict: Checks by Daily Trust show that former President Goodluck Jonathan did not participate either physically or virtually at the just-concluded presidential screening of the APC as shown in the picture. As such, Daily Trust found the claim to be FALSE.

This fact check was done in partnership with the Centre for Democracy and Development (CDD).