FACT CHECK: Is it true that Nigeria’s life expectancy is responsible for low COVID-19 mortality?

Several social media users have claimed that Nigeria’s low life expectancy has been responsible for the low COVID-19 mortality recorded in the country.

Data from the Coronavirus Resource Centre of John Hopkins University show that as at May 30, 2021, Nigeria had recorded 166,285 cases of COVID-19, out of which there have been 2,071 deaths.

Some social media users in Nigeria claim that the low COVID-19 deaths recorded in Nigeria have been due to the country’s low life expectancy. This claim may have been accentuated by media coverage of fatalities from the disease that less deaths are recorded in Africa than projected.

The World Health Organisation defines life expectancy as the average number of years that a newborn could expect to live, if he or she were to pass through life exposed to the sex- and age-specific death rates prevailing at the time of his or her birth, for a specific year, in a given country, territory, or geographic area.

For instance, on June 1, 2020, StatiSense, tweeted via its handle, @StatiSense, about low COVID-19 deaths in Nigeria compared to Algeria, Egypt, Saudi Arabia, the United States and Italy.

Responding to the tweet, a Twitter user, Olamide Eyinla, claimed via his handle, that is due to low reporting of cases and “low life expectancy, so a small group aged 60 years and above.” 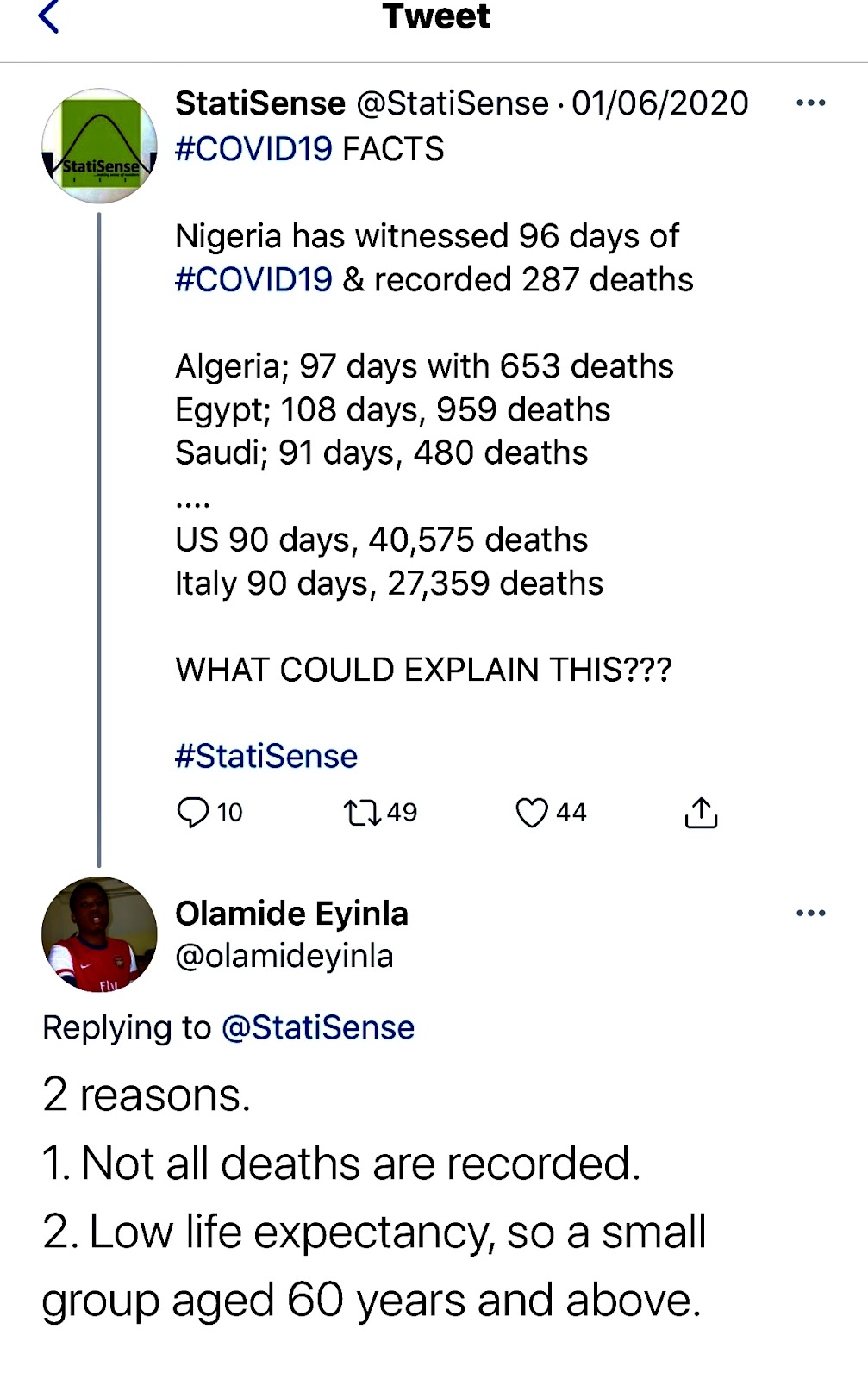 Similarly, a Facebook user, Jaafar Lawan, also claimed in a post on May 30, 2020, that low COVID-19 deaths in Nigeria and some African countries is largely due to low life expectancy. 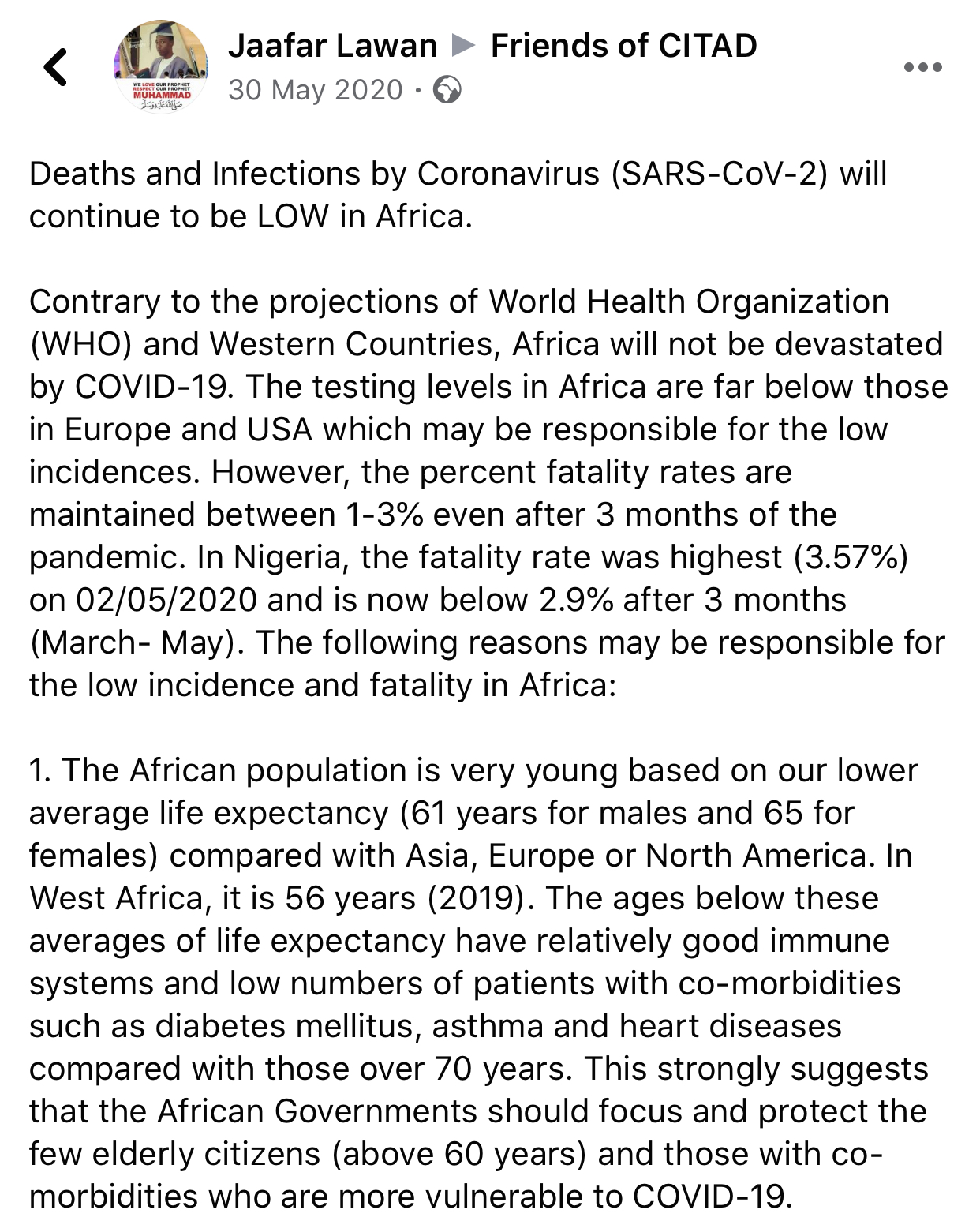 “The ages below these averages of life expectancy have relatively good immune systems and low numbers of patients with co-morbidities such as diabetes mellitus, asthma and heart diseases compared with those over 70 years,” he claimed.

Even the mainstream media in Nigeria spread this claim to justify low COVID-19 deaths in Nigeria.

For instance, a national newspaper reported on September 19, 2020, that “Public health experts say that, because life expectancy is so low in these countries, there are fewer older people, who are particularly vulnerable to COVID-19. And with younger populations, fewer people are dying from the disease or falling ill enough to be hospitalised.”

This claim may have impacted the acceptance of COVID-19 vaccination in Nigeria.

CFR measures the proportion of coronavirus deaths per confirmed coronavirus cases to show the severity of the disease while fatality per capita measures the number of fatalities relative to the country’s population.

However, it was observed that Nigeria’s 1.25 CFR is around the region of the 1.27 percent mean CFR of countries with high life expectancy rates.

Furthermore, a comparison of coronavirus fatality per capita was also adopted to have a clearer perspective.

Coronavirus per capita deaths for the countries were determined by dividing the number of deaths by the population of each of the countries.

This shows that Nigeria’s 0.001 percent COVID-19 deaths per capita rate is less than the average of 0.103 percent for the five countries with high life expectancy.

However, it should be noted that Nigeria’s per capita mortality rate is less than Singapore’s 0.005 percent mortality per capita despite having one of the highest life expectancies in the world.

The claim that low COVID-19 mortality in Nigeria is due to the country’s low life expectancy is misleading. Evidence shows that Nigeria’s COVID-19 fatalities per capita is lower than that of Singapore with one of the highest life expectancies in the world.

Evidently, data from Worldometer and John Hopkins University show that Brazil with a population of 214 million people, which is slightly higher than the number of people living in Nigeria, has recorded 461,057 deaths from COVID-19 as at May 30, 2021, translating to 0.22 percent mortality rate of the country’s total population.

This means that, though Nigeria and Brazil have almost the same size of population, Brazil’s COVID-19 deaths have doubled the number recorded in Nigeria.

This report was produced as part of IWPR’s Africa Resilience Network (ARN)programme, administered in partnership with the Centre for Information Resilience(CIR), the International Centre for Investigative Reporting (ICIR) and Africa Uncensored. For more information on ARN, please visit the ARN site